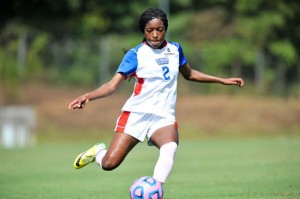 Congratulations to 18 year old soccer player Taina who was selected in January to play with the Haitian women’s national soccer team as the team prepares for qualifying matches later this year for the 2019 Women’s World Cup in France or Korea.

[GlobalAtlanta] Though she has still never visited her ancestral country, soccer is giving Georgia State University freshman Taina Anglade a chance to reconnect with her Haitian roots.

The 18-year-old in January joined the Haitian women’s national soccer team for a weekend training camp in Ft. Lauderdale, Fla., as the team prepares for qualifying matches later this year for the 2019 Women’s World Cup in France or Korea. As of now, Anglade is on the team and is invited to play in the American tour starting April 8.

“Being surrounded by all the girls and their parents and meeting the different sponsors for Haiti has opened my eyes to the love, pride and joy of the Haitian culture,” Ms. Anglade said.

Born to Haitian parents in New Jersey on Oct. 15, 1996, Ms. Anglade was just 3 when her father began passing down his love for Haiti’s favorite sport, which he played on the streets as a child.

“The first time I played soccer, I’m pretty sure I cried,” said Ms. Anglade. “I hated it probably until I was about 7 or 8. I used to want to quit every day, but my dad kept pushing it. – Continue Reading