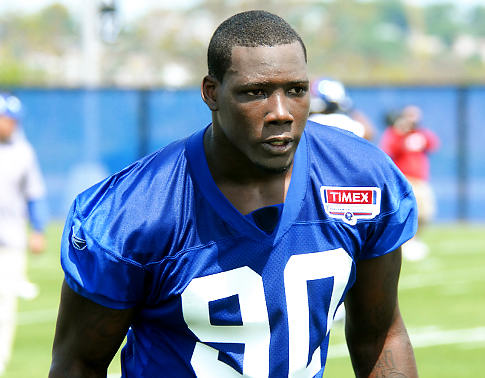 It’s been a couple of months since we post an update on Haitian football player and New York Giants defensive end Jason Pierre Paul. On Tuesday a source told ESPN’s Adam Schefter that Jason will be returning to the New York Giants on a one-year deal for up to $10.5 million.

The Arizona Cardinals had made a late push for the defensive end, a source said. On Instagram, Pierre-Paul thanked organizations that reached out to him, especially the Cardinals.

Congratulations Jason, happy to see you beat the odd and continue your career.

Last year Pierre-Paul stayed away from the team throughout the summer and didn’t return until late October after injuring his hand in a July 4th accident. The giants later worked out an incentive-laden deal for just the remainder of 2015. Jason played in the team’s final eight games and wore a heavy “club” wrap on his right hand, which limited his ability to tackle, he ended the season with one sack.

Following the season, Pierre-Paul had surgery on his right middle finger that he said he hoped would allow him to bend it and grip better, so that he could play without the club on his hand going forward.

In other Jason Pierre-Paul news, Jason  filed a lawsuit and he’s suing ESPN and NFL reporter Adam Schefter for sharing his medical records on Twitter from a  July 4 fireworks accident that caused him to amputate one of his fingers ( click picture above to read original story).   Schefter’s  tweet which was posted 4 days after the accident confirmed the rumors swirling around the story that Jason severely injured his hand due to a fireworks mishap

According to Julia Marsh of the New York Post, the lawsuit was filed in a Florida court Wednesday and says Schefter “improperly obtained” Pierre-Paul’s medical chart, which shows the 27-year-old defensive end had his right index finger severed from his hand.

“This action arises out of ESPN reporter Schefter’s blatant disregard for the private and confidential nature of plaintiff’s medical records, all so Schefter could show the world that he had ‘supporting proof’ of a surgical procedure,” the suit says.

Sports Illustrated legal analyst Michael McCann notes this may be a difficult case for Pierre-Paul to win, because HIPAA protections don’t extend to the media. It’s difficult for public figures to claim their privacy has been violated as well, however the Society of Professional Journalist “Code of Ethics” states a journalist should always “balance the public’s need for information against potential harm or discomfort” to the subject.

In a July interview with SI, Schefter said he wishes he had done more to protect Pierre-Paul’s privacy.

The Giants definitely have Jason’s back, recently, New York Giants co-owner, Steve Tisch, told TMZ that he “supports” JPP’s decision to sue as he says, “Medical records are confidential. I mean, it’s a total invasion of the HIPAA laws…Medical records are not to be released.”

Tisch made reference to the HIPAA, or Health Insurance Portability and Accountability Act laws that protect medical information. The hospital fired two of its employees as they broke these laws finding they “inappropriately” gained access to JPP’s file.

What do you think, does Jason have a case?