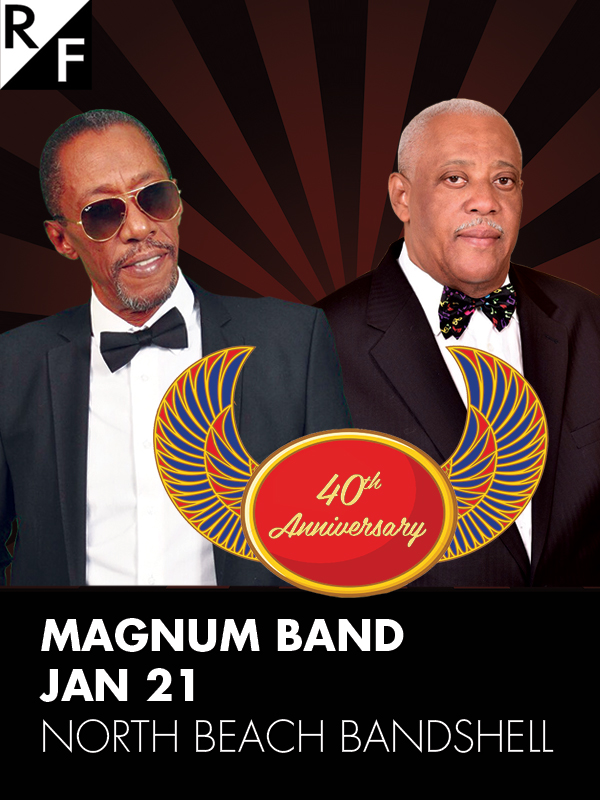 Konpa legends Magnum Band are celebrating their 40th anniversary with a concert under the stars, January 21st, at the North Beach Bandshell in Miami Beach. Unequal in its virtuosity, the konpa band that formed in June 1976 in a Little Haiti backyard is now an international treasure – join us to honor them with this special concert!

The Pasquet brothers – guitarist Dadou and drummer Tico – revolutionized the music scene fusing jazz, konpa dirèk, pop, rasin with soulfully woke lyrics. They play the way konpa ought to be played; with gusto and with depth. The music is consciously worked and meticulously rehearsed. The mature resonance of “Eksperyans”; the coquettish, catchy sounds of “Se Verite”; and the haunting, poignant, and thoroughly consuming lyrics of “Ou pi la”, are but a few hits that span a well-over-30-album repertoire.

To this day, Magnum is a force to be reckoned with. This is all due to the sheer talent and discipline of its visionary founders. Talent, too, abounds – one of the best percussionists Haiti has produced, Tico Pasquet is the charm, “le chouchou de Magnum”, and the life of the party. And no one stays unaffected by the genius of Dadou Pasquet playing guitar, one of the world’s great virtuosos – the dexterity of his fingers, the wildness of his cords.

The band that dominated the HMI (Haitian Music Industry) of the 1980s and 90s konpa scene is still at it, now celebrating 40 years of transcendent and riveting music. The band has been celebrating with sold-out concerts in Paris, New York, throughout the Caribbean, and now Miami Beach!