Haitian actress Garcelle Beauvais has starred in many TV shows and movies ranging from The Jamie Foxx Show and Coming to America. As her career blossomed over the years, Beauvais has acquired many talents and skills in addition to her acting.

The actress who co-hosts the Daytime entertainment show “Hollywood Today Live recently teamed up with Emmy-winning producer Lisa Wilson to launch their new multimedia production company Beauvais Wilson Productions and their very first project is ‘Lalo’s House’, a film aiming bring awareness to the worsening conditions of child trafficking in Haiti and around the world.

Beauvais, playing Sister Francine, is reported to be one of the main actor alongside Haitian actor Jimmy Jean-Louis who will play Jean the Father, and Haitian musician Paul Beaubrun. The film is set to take place in Haiti and will document the saddening reality of too many children who live in the realm of child slavery, and hopefully bringing awareness to the issues impacting Haiti’s children.

Centered around the relentless hope of two young girls, Manouchka and younger sister Phara; Lalo’s House is a stylized film depicting a little girls reality between documentary and fable, terror and innocence. Trapped in a series of unfortunate events, Manouchka and Phara find themselves being in the wrong place at the wrong time, resulting in them being kidnapped.

The little girls are brought to what at first appeared to be an orphanage. To their greatest fear, the orphanage actually serves as a network for child prostitution. Pretty soon, Manouchka is faced with tough decisions ranging from protecting her innocent little sister, and growing up far beyond her child years.

With the making of this film and the purpose behind it, we can’t help but wonder what is the state of Haiti’s human trafficking condition, and what exactly is being done about it? Well, thanks to the U.S State Department, anyone can find factual details or conditions concerning human trafficking in any nation or country in the world. Every year, the U.S State Department conducts its annual U.S. Trafficking in Persons Report.

In 2016, when the annual TIP report was conducted, Haiti was placed in Tier 2 Watch list for the fourth consecutive year. Haiti is making efforts to eliminate the threat of human trafficking and to prosecute those who are guilty of the crime with sentences ranging from 5-15 years or a lifetime of imprisonment depending on the severity of the crime.

While in the process of making the film, the director, Kelly Kalí, made this statement:

“Child trafficking is a debasement of our common humanity and it should concern every community because it tears at our social fabric. If you work in the business sector, child trafficking should concern you because it distorts markets. If you work in sustainability, child trafficking should concern you because it endangers public health and it fuels violence and organized crime. It concerns me as a filmmaker because while knowing all this, I cannot allow such travesty to go on so long as my crew and I can help it. This is why Lalo’s House deserves to be made. If we are the choices that we make, then choose to support us in making this film come alive.The Film has a golden opportunity to readdress the needs of the Haitian people and we are excited for you to help us be part of that journey.”

All other statements or content regarding the film and ways of support the cause may be found on the film’s website. 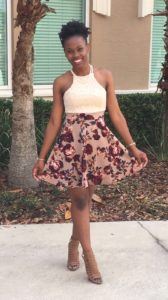 I am of Haitian descent and am currently a junior at the University of South Florida, double majoring in Studio Arts and Marketing. Besides my current career path in school, I am a part of the USF chapter of Fanm Kreyol, Incorporated; which is a business organization designed by Haitian women, for Haitian women, to further the empowerment of Haitian women everywhere.