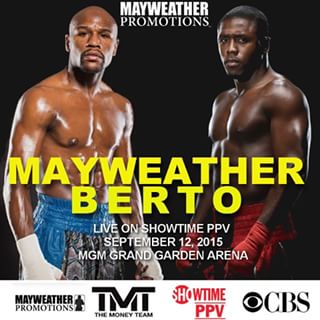 In what man will call the worst kept secrets in boxing, the Pound-for-pound king Floyd Mayweather, four months removed from his historic victory against Manny Pacquiao in the richest fight in boxing history, said Tuesday he will return to defend his welterweight world titles against Andre Berto on Sept. 12 at the MGM Grand in Las Vegas.

Mayweather (48-0, 26 KOs), who will be fighting at the MGM Grand for the 12th consecutive time, has repeatedly said the fight, which will be televised on Showtime PPV (8 p.m. ET), will be the final fight of his brilliant, 19-year career.

“I’m ready to get back in the ring on Sept. 12 and prove again to the whole world why I’m the best ever,” Mayweather said. “I always bring my A-game, and this fight against Andre Berto is no exception. He’s a young, strong fighter who is hungry to take down the best. Forty-eight have tried before, and on Sept. 12, I’m going to make it 49.”

Berto (30-3, 23 KOs), a two-time welterweight world title holder who currently holds an interim belt, is just 3-3 in his past six bouts and viewed by many as an easy mark for Mayweather.

He is a massive underdog but said he plans to knock Mayweather off his undefeated perch.

“I’m coming to kick Floyd’s ass on Sept. 12,” Berto said. “Best believe that I plan to bring it to Floyd and I’m not concerned about what 48 other fighters have been unable to do. Somebody is getting knocked out, and it won’t be me. You don’t want to miss this.”

A news conference is scheduled to take place at 3 p.m. PT Thursday in downtown Los Angeles. The event will be closed to the public. – Continue on ESPN

With so many people thinking this fight is a waste of time and headlines like the Guardians “Floyd Mayweather v Andre Berto: an embarrassment only a mug would buy” Andre is ignoring the  negativity and remaining focus as he prepare for the biggest fight of his career.

I reached out to Andre last night on his way to LA for his first official press conference, and a cool and very confident Berto want his Haitian fans to know he is ready to make history and represent for  Haitians everywhere. “We have to put on for Haitians” said Berto in his quick chat with L’union Suite.