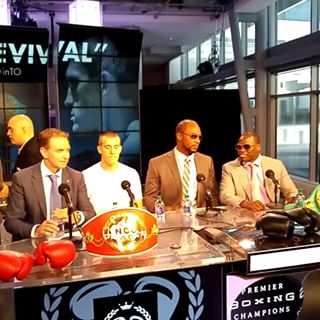 One day before the Floyd Mayweather, Andre Berto fight, another Haitian fighter will get the opportunity to prove we’re the best!

Former Canadian boxer Lennox Lewis was in Toronto earlier today to announce the coming title fight between Haitian born Canadian boxer Adonis  “Superman” Stevenson and Tommy Karpency on September 11 at the Ricoh Coliseum in Toronto, as the headline fight on Premier Boxing Champions on Spike TV.

Light heavyweight champion Adonis Stevenson, who has yet to fight an elite opponent during his title reign, is taking on yet another long shot opponent.

Stevenson, who in the past year has declined dangerous unification fights with Sergey Kovalev and Bernard Hopkins as well as former world champion Jean Pascal for softer opposition, will face club fighter and fellow southpaw Tommy Karpency on Sept. 11 at Ricoh Coliseum in Toronto, promoter Yvon Michel announced on Wednesday night. The fight will headline a Premier Boxing Champions on Spike TV card.

“I’m excited to announce my next fight on Sept. 11 in Toronto against Tommy Karpency,” Stevenson said. “I’m ready to put the hurt on. I work hard and stay focused.

Stevenson (26-1, 21 KOs), 37, of Montreal, will be expected to put the hurt on an opponent with a lackluster resume. Karpency lost back-to-back fights in 2012, a shutout decision to Nathan Cleverly in a world title bout followed by a seventh-round knockout to Andrzej Fonfara, who lost a decision to Stevenson 15 months ago. After those two defeats, Karpency won four fights in a row, all by decision. However, two were against Rayco Saunders, whose record was 23-26-2 going into the second bout in May, and one was against Dhafir Smith, who was 27-24-7. 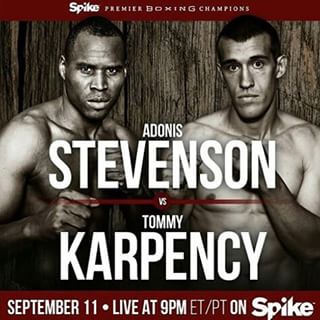 claimed a split decision against the badly faded former world champion Chad Dawson in October. Stevenson won the title from Dawson in June 2013, brutally knocking him out in 76 seconds.

Karpency tried to make his case that he warranted the world title shot.

“I beat the same guy Stevenson beat to become world champion,” he said. “I beat [Dawson] just over a year after Stevenson beat him. After that win, I said that the sky was the limit and that I wanted the best in the world. The win proved that I belong amongst the elite at light heavyweight. Now it is my job to win this fight.”

Other than two bouts in the United States, Stevenson has fought all of his fights in Quebec. Now he is headed for Toronto, which has rarely hosted championship boxing this century. – Continue Reading Here