Whitefield Academy alumna Naomy Grand’Pierre was invited  to swim with the Haitian Olympic swimming team which will compete at the 2016 Olympics in Rio de Janeiro, Brazil in August 2016. Grand’Pierre, who is entering her sophomore year at the University of Chicago, also competes on the Atlanta Dolphin Swim Team.

“I look forward to representing my Atlanta Dolphin Swim Team and certainly the country of Haiti on one of the most prestigious stages of competition,” Grand’Pierre said. – Source

According to this article by University of Chicago Site, 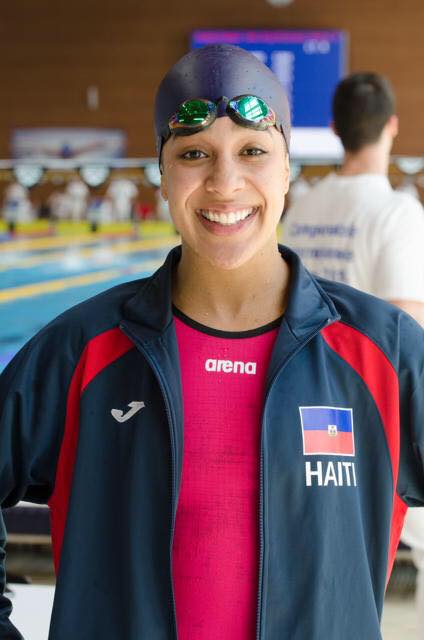 Grand’Pierre’s first year at the University of Chicago has drawn to a close. The Atlanta, Ga. resident experienced the grind of collegiate competition as a new member of the varsity swimming and diving team. The goal of competing in the Olympics always loomed in Grand’Pierre’s mind growing up as an athlete. A conversation last year with her mother brought it back to the forefront. Along with her parents, Reginald and Clio,

Along with her parents, Reginald and Clio, Naomy is a dual citizen of both the U.S. and Haiti. Clio suggested that they research what it would take to represent Haiti as an Olympic swimmer. They contacted the Haitian Swimming Federation to inquire about Haiti’s plans for the approaching Olympic Games in Rio de Janeiro. One male swimmer was lined up to compete, but no female swimmers. The idea took root, and Naomy began the conversation with the HSF to determine what it would take for her to join the Haitian national team.

During her research, Grand’Pierre found that some of her past times would currently make her one of the elite Haitian swimmers. She later shared her Olympic ambitions with UChicago Head Swimming Coach Jason Weber in December 2015 when the varsity squads were on their winter training trip in Florida. As the season progressed, Grand’Pierre continued to train with the team and hone in on the necessary qualifications.

“In order to swim for Haiti, I had to prove that I would be the fastest registered Haitian swimmer,” Grand’Pierre said. “I had to go under 28 seconds in the 50-meter freestyle in order to do so. The process was stressful and difficult. Around the world, there are plenty of long course meets; but here in the U.S., long course is only done in the summer. Luckily, during Olympic years, there are more opportunities to swim long course outside of the season and an opportunity came up for Sunday, March 20 in Greensboro, N.C. on the last day of NCAA [nationals].

“I had to swim a long course 50-meter freestyle in under 28 seconds after only training short course yards. The first time I trained long course before this event was that day during warm-ups. Luckily for me, my first race posted at 28.00 and I swam the 50-meter one more time and swam a 27.99, which proved that I would be the fastest candidate for the spot.”

The time trial results in North Carolina produced a mix of confidence and surprise. In 2013, she recorded a 27.26 in the event, but only after months of strenuous long course training.

“Although I knew going under a 28 was realistic for me, I was nervous since I wasn’t able to get any long course training in. I was very relieved when I saw 27.99 posted on the clock and shocked at how close I was at not making it,” she said.

The dream was approaching reality, and Grand’Pierre maintained her focused preparation under the guidance of Weber and Assistant Coach Nick Daly. An NCAA waiver allowed her to prolong training all the way through the end of the academic year in June.

“We’ve been able to train Naomy one-on-one since the season ended, so she’s gotten a lot more attention from the coaches,” Weber said. “We’ve tailored her training to the specific events she will be competing in, doing a lot more sprint and power work, while also finding time to switch the pool to long course so she can do a few practices a week in that format.”

The big eye-opener came courtesy of FINA, which serves as an international governing body for aquatic competition. FINA awarded Grand’Pierre a scholarship for a three-month training program at the SPIRE Institute in Geneva, Ohio from June 14 to September 14.

She will also compete in several international meets in Romania (May 25-29) and in the Bahamas (June 29 – July 2).  Her main event would be the 50-meter freestyle, with possible qualifications in the 100-meter freestyle and 100-meter breaststroke based on her performances at the international meets. – Continue Reading on University of Chicago Site

We look forward to watching Grand’Pierre in the Olympic opening ceremonies on August 5.