With her new album Talk a Good Game due in stores on June 18th, Kelly Rowland is letting fans get a sneak peek of the project before it makes its arrival. So far we have experienced Rowland’s lead single, “Kisses Down Low,” the tell-all ballad “Dirty Laundry,” “You Changed,” featuring Beyoncé and Michelle, and now she premieres “Gone,” featuring rapper Wiz Khalifa. On the breakup track, which runs with the theme ‘You don’t know what you’ve got til it’s gone” Kelly let’s her man know that she’s finally done. Wiz adds a nice little touch while playing the part of the guy who basically thinks she’s talking smack, but she’ll be right back. Kelly Rowland’s new album, Talk A Good Game, is in stores, June 18.

You like to break up to make up
Roll me up a joint soon as I wake up,
When I put it down, mess up your make up
Talking bout you gon’ leave,
probably should, I ain’t tripping,
just a bunch of extra sh-t, That I ain’t missing
My sister tried to tell me ’bout you, I ain’t listen

Take a listen to Kelly Rowland and Wiz Khalifa’s new song “Gone” below: 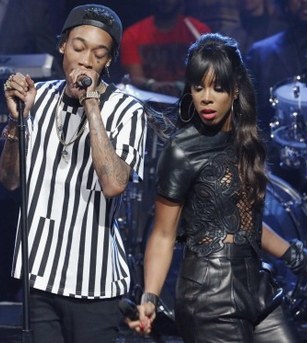