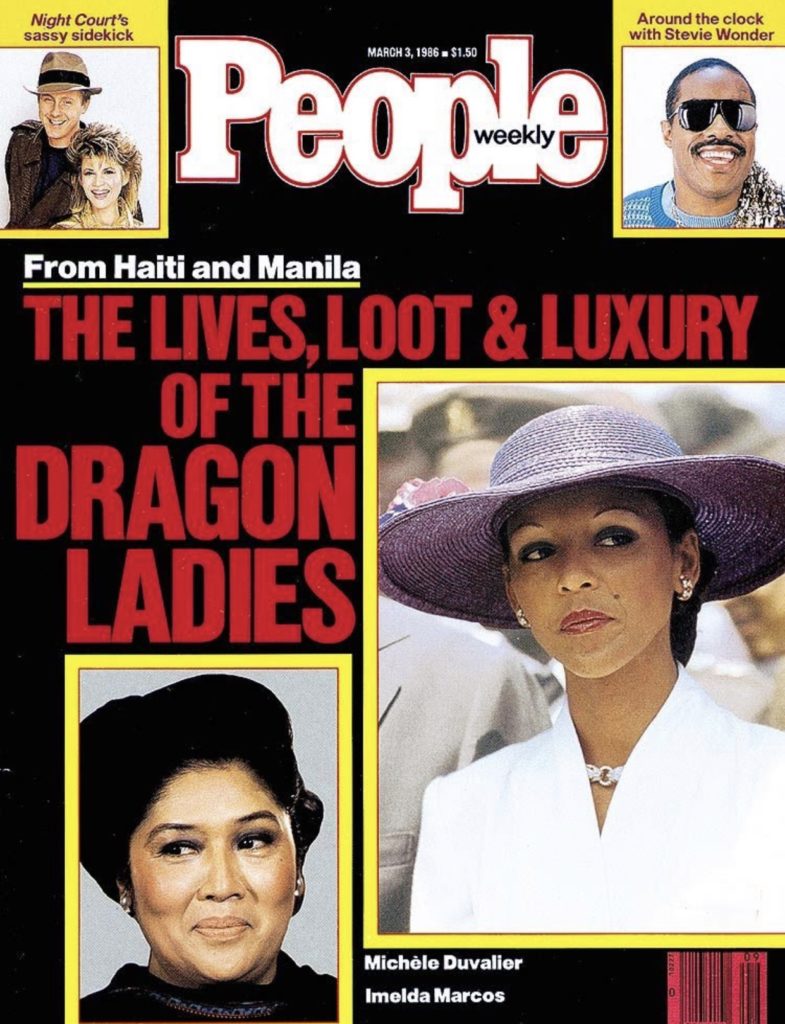 Did you know Michèle Bennett Duvalier was on the cover of People?

The cover story highlighted Michele and Imelda, two dictator’s free-spending wives. Imelda Marcos and Michèle Duvalier are heirs to a long and colorful tradition in politics. The magazine describe them as  “dragon ladies,” women who exploit their beauty to marry into power and then use their influence to make that power their own, sometimes eclipsing their husbands.

Here are a few excerpts from the cover story by Peter Carlson, March 03, 1986

Before they fled the country they had plundered and brutalized, Jean-Claude “Baby Doc” Duvalier, 34, Haiti’s shy and weak-willed “President-for-Life,” and Michèle Bennett Duvalier, 35, his beautiful and flamboyant wife, threw one last party. They invited their closest friends to the elegant white National Palace for a final midnight champagne toast, and then hopped into a BMW for a ride to the airport that was named after Baby Doc’s father, François “Papa Doc” Duvalier, the notorious dictator who had ruled with voodoo and violence for 14 years before his death in 1971.

At the airport the Duvaliers drove through a gauntlet of photographers. Baby Doc, at the wheel, was characteristically impassive, but Michèle, wearing a chic white turban, flicked the cigarette she held in her long fingers and exhaled theatrically for the paparazzi. And then, after a perfunctory ceremony, they stepped aboard a U.S. Air Force C-141 cargo plane and flew to France.

As news of the exile spread, Haitians celebrated with revelry and rioting. In the mountains north of the capital, mobs sacked the couple’s country home, carrying off everything of value—furniture, light fixtures, even the plumbing. Soon all that was left was garbage. But what garbage it was—empty boxes from Saks Fifth Avenue and an envelope from Cartier, a shipping label from Harrods of London marked “one of 20 lots” and addressed to Mrs. Michele B. Duvalier, First Lady, Palais National, Port-au-Prince, Haiti.

That designer trash was the residue of a shopping binge that helped to topple the 28-year Duvalier dynasty. In November, Michèle had spent a reported $1.7 million in the classy shops of New York, Paris and London. A few weeks later an oil tanker refused to unload its precious cargo in Haiti because the government couldn’t pay for it.

Daughter of a financially shaky coffee exporter and small businessman, Michèle Bennett Duvalier was born outside the circle of the Haitian elite. Sources say she first met the porcine Baby Doc when they were students in Haiti, where Duvalier was known to his classmates as “Baskethead.”

They were married on May 27, 1980. The $3 million wedding was the most lavish spectacle of the Duvalier years. Michèle imported a Givenchy gown and a hairdresser from Paris for the ceremony. The couple was feted with a 101-gun salute and $100,000 worth of fireworks, and the poor (80 percent of Haiti’s people earn about $100 a year) were provided with free soup and rum for the august occasion.

“She would buy truckloads of dresses from Valentino. She had Boucheron, the Paris jeweler, fly to Haiti to sell jewels to her—not $200,000 worth but millions, millions,” says a Haitian socialite. Another friend tells of buying dozens of pairs of $500 Susan Bennis Warren Edwards shoes for Michèle during a shopping foray on Park Avenue. “She wore earrings that looked like lanterns,” says Suzanne Seitz, a Port-au-Prince hotel owner.

An acquaintance of her interior decorator reports, “She once saw a rare Louis XV chandelier and insisted on having several. She got 12.” Others talk of a $50,000-a-month flower order from Miami to decorate the palace and the President’s four villas.

But in Haiti, more than words were needed. It is a country where the main causes of death are malnutrition, diarrhea, tuberculosis, malaria and other preventable diseases—a country with an illiteracy rate of about 90 percent. Under Baby Doc the economy, already the worst in the western hemisphere, crumbled. As the people sank deeper into poverty, Michèle became more ostentatious—she reportedly spent $75,000 for a “freezer” in which to store her fur coats; her father and family became increasingly wealthy.