P!nk has been named the newest ambassador to the United Nations Children’s Fund (UNICEF), the singer/songwriter announced during a live appearance on “Good Morning America” on Monday.

“I’ve always wanted to work with UNICEF,” Pink said on “GMA.” “It’s the one organization over the last 15 years just consistently been in mind for all the amazing things that they do and timing is everything and it worked out.” 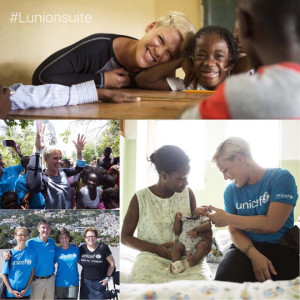 The Grammy Award-winning artist, who has a 4-year-old daughter named Willow with husband Carey Hart, traveled to Haiti with UNICEF this summer to witness firsthand the plight of malnourished children there.

During Pink’s trip to Haiti in July, P!nk  witness first-hand the transformative impact that therapeutic food can have on malnourished children, who can be successfully treated in their own communities, and see the progress that has been made for children since an earthquake devastated the country in 2010. She visited a health center for infant care where mothers can have their children vaccinated, as well as examined and treated for severe acute malnutrition and attend breastfeeding courses. P!nk was also introduced to other UNICEF programs, including education initiatives and polio, diphtheria and whooping cough immunizations programs.

As a UNICEF Ambassador, P!nk will use her voice to encourage families across the United States to get active and save lives with UNICEF Kid Power, the world’s first wearable-for-good™. She will also educate the public about UNICEF’s global health and nutrition programs, and highlight UNICEF’s role in fighting global malnutrition, which impacts 159 million children worldwide.

“We are thrilled to have P!nk join us as the newest UNICEF Ambassador,” said Caryl M. Stern, President & CEO of the U.S. Fund for UNICEF. “As a passionate advocate for children and healthy living, P!nk demonstrates a deep commitment to our mission to put children first. We are excited that she is shining a light on the critical issue of malnutrition – which affects 1 in 4 children around the world – while continuing to support UNICEF Kid Power, and encourage families across the country to be part of the solution.”

In addition to her work as a UNICEF Ambassador, she is a supporter of various charities including the Ronald McDonald’s House, Make A Wish Foundation, PETA, Autism Speaks, Human Rights Campaign, and No Kid Hungry.

Pink is the latest star to be named UNICEF Ambassador. Other celebrities who have also advocated on behalf of children include Téa Leoni, Sarah Jessica Parker, Laurence Fishburne and Selena Gomez.