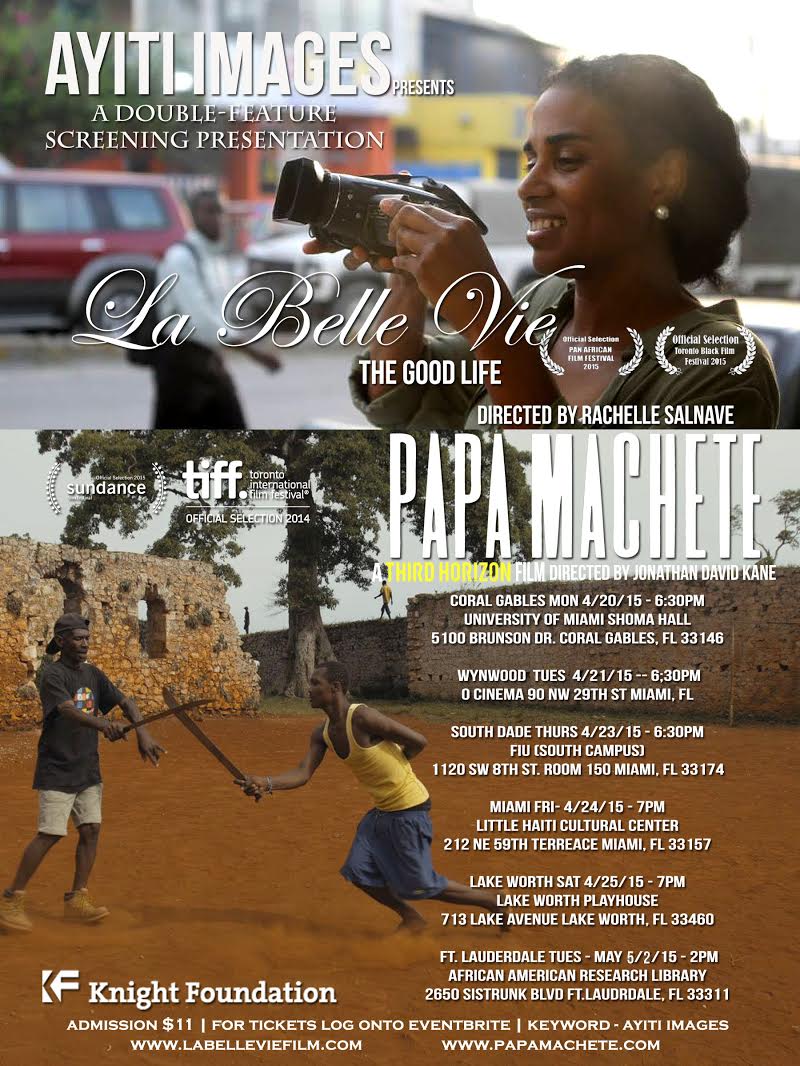 In it’s season finale, Ayiti Images a traveling Florida film series ends its successful 2014-2015 run with a double feature screening about the Haitian experience. The screenings will be held at at 6 locations beginning Monday April 20th- May 2nd.

Ayiti Images presents the highly successful short film Papa Machete directed by Jonathan David Kane, which tells the story about the art of machete fencing in Haiti will be followed by the highly anticipated feature documentary La Belle Vie: The Good Life directed by Rachelle Salnave which examines Haitian identity.

Rachelle Salnave premiered her 2nd feature documentary La Belle Vie: The Good Life at the 23rd Annual Pan African Film Festival in Los Angeles and also the 3rd Annual Toronto Black Film Festival this past winter. A four-year in the making process, La Belle Vie: The Good Life takes a look into Haitian-American filmmaker, Rachelle Salnave’s journey to discover her Haitian roots by examining the complexities of the Haitian society but also chronicles her voyage to find hope in this nation on the brink of a new Haiti. “I began creating La Belle Vie: The Good Life in the hopes of showing the world another side of Haiti. As I come to terms with my own identity, I encounter a movement of Haitian’s in Haiti and abroad that may have faced similar stories then me, but have used their talents to change the face of Haiti and its culture,” director Rachelle Salnave explains.

In collaborations with the John S. and James L. Knight Foundation FIU’s Latin American and Caribbean Center, Little Haiti Cultural Center, O Cinema, Lake Worth Playhouse, the Cinema and Interactive Media and the Haitian Student Association at the University of Miami, the films gives Haiti a unique voice told by the people who live, speak and feel the culture.

Watch The Trailer Below: