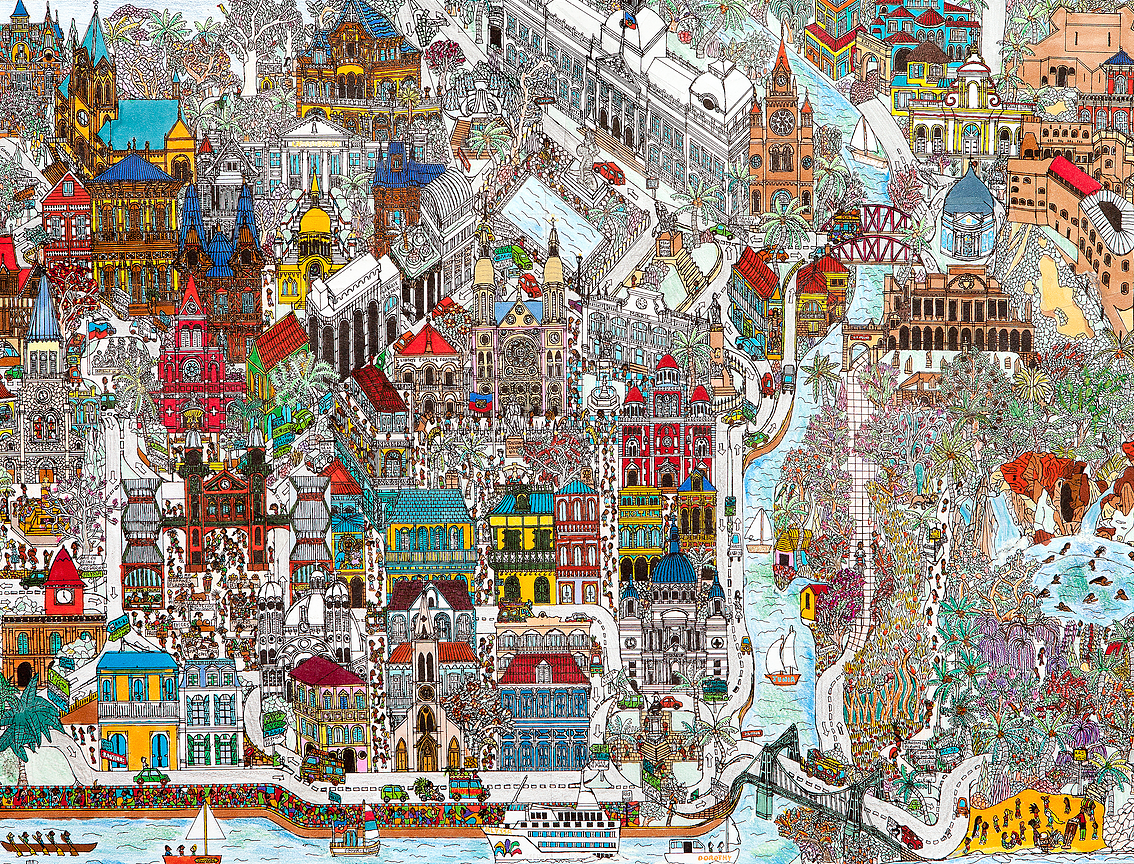 A 14-year-old boy of Haitian descent, Max Beckrich, made an amazing visual poem of a drawing that will really touch the Haitian diaspora. The 14-year-old weaves together cherished landmarks (some gone for good) illustrating a space many of us have never had the chance to experience ourselves. His family is producing a limited edition print with profits going to Food for the Poor in Haïti- an NGO with a proven track record.

Beckrich’s one-of-a-kind drawings hang in the collection of the US State Department and in private homes all over the world.  Quite a feat for a fourteen year old!  Maxime Beckrich’s passion for architecture emerged early on.  As soon as he could hold a pencil, he started designing incredibly detailed urban environments.  Maxime spends hours researching landmarks and mapping out dreamlike cityscapes that seamlessly intertwine and layer buildings to create incredibly original drawings.

“Rêves d’Haïti” was commissioned by Maxime’s grand-father, Haitian architect Pierre-Richard Villedrouin.  Affected by the earthquake and recent hurricane that have martyred Haïti lately, Maxime created a joyful and exuberant drawing that celebrates beloved landmarks.  In an effort to share this image with a larger group of people, and do some good, the family proposed a limited edition print of this incredible drawing with the proceeds supporting Food For The Poor a NGO with a long track record of lifting up the most vulnerable.

Only 65 copies “Rêves d’Haïti” were printed in France on November 21st, 2016.  The print measures  on quality paper using the finest links.

Some of the featured landmarks in the prints: The Presidential Palace, Notre Dame Cathedral, The statue of Unknown Marron, Gingerbread houses, The Splendide Hotel and the Iron Market in Port-au-Prince, Saint Pierre Church and El Rancho Hotel in Pétion-ville, Fort Jacques in Kenscoff, Cathedral Saint Louis King of France in Jeremie, Bassin Bleu near Jacmel, Cathedral of the Immaculate Conception in Port de Paix, Citadel Laferrière, Cathedral of Milot, and Sans-Souci Palace near Cape Haitian and Fort Liberté near the Domican Republic.