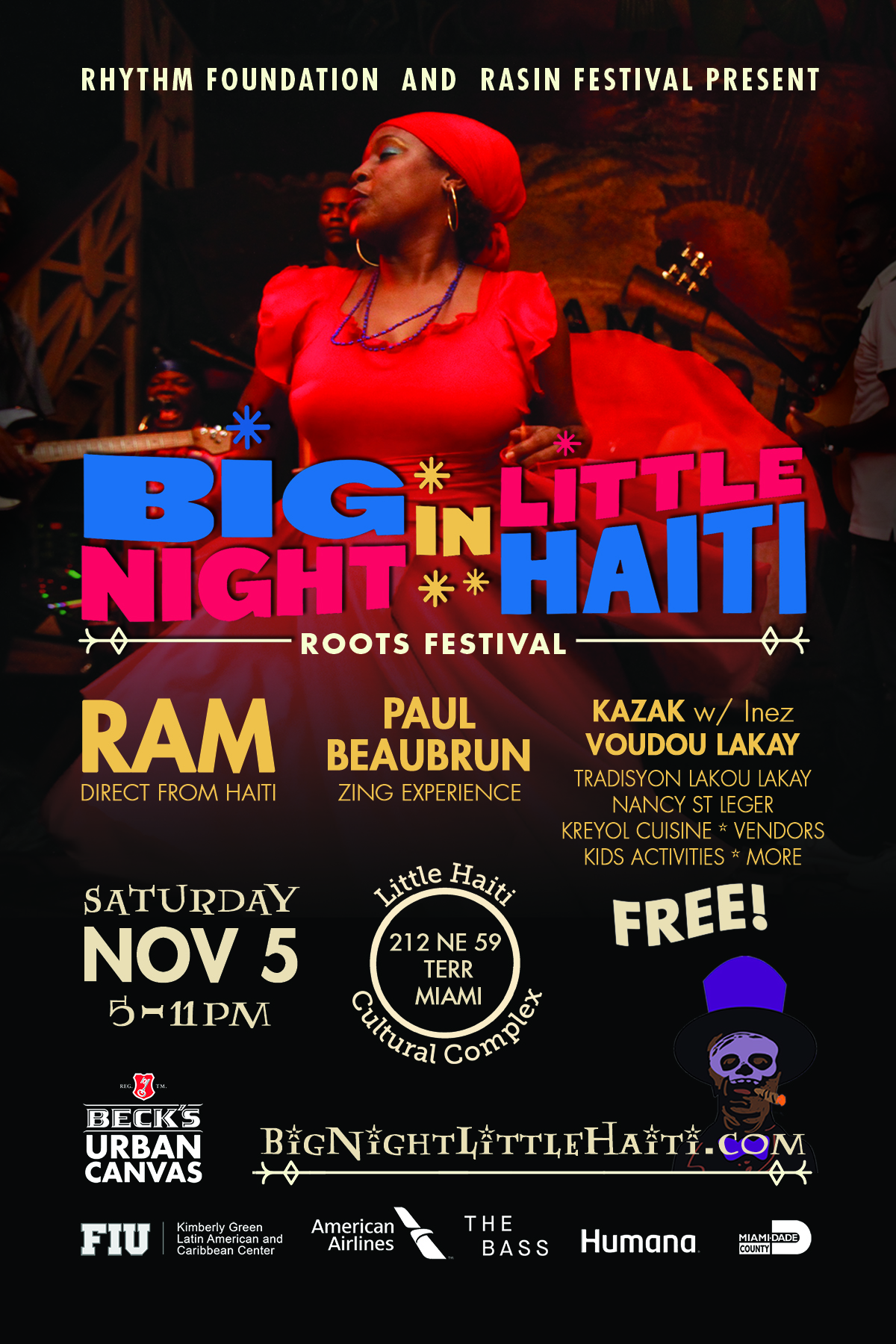 Big Night in Little Haiti Roots Festival is free and open to the public. The gates to the Little Haiti Cultural Center open at 5pm, and music begins at 5:30pm. The late night Bal Gede takes place next door at 380 District (380 NE 59 Street, Miami), starting at 11pm. Tickets are available for $25 advance / $30 at the door.

The popular monthly celebration of Haitian music, art and culture returns — as a major annual festival! Big Night in Little Haiti, a partnership between The Rhythm Foundation and Rasin Festival, launches in the heart of Little Haiti, Saturday November 5.

November is an important month in the Haitian calendar. It begins with gede, the Haitian All Saints Day holiday that celebrates the spirit of the ancestors, and which includes significant dates in Haitian history. Big Night in Little Haiti features a headline concert by legendary ‘voudou rock ‘n’ roots’ band RAM, plus the US debut of Symbi Roots, DJ Gardy Girault, and much more. The festival is free and open to the public, followed by a ticketed Bal Gede – a late-night costumed revelry of music and dance.

RAM is Haiti’s legendary 14-member rasin (roots) band. They are famed for a regular Thursday night jam at bandleader Richard Morse’s historic Hotel Oloffson in downtown Port au Prince. In RAM, one hears the beautiful complexity of the past, present and future of the Caribbean. Morse’s father was an American sociologist, and his mother famed Haitian singer Emirante de Pradine. Morse graduated from Princeton in 1979, an anthropology student who also played in a punk rock band. Returning to Haiti in 1987, he took over the operation of the near-ruined Oloffson Hotel. The folkloric dance troupe Morse hired for the hotel became the base of his new band, which grew to combining elements of ceremonial voudou traditions, folk styles and American rock and roll. Earlier this year, the band released their first studio album in 10 years, the triumphant RAM 6: Manmanm Se Ginen.

Paul Beaubrun, the young Haitian bluesman, isn’t kidding when he covers Jimi Hendrix’ Voodoo Child. Beaubrun’s parents are Lolo and Manze Beaubrun, founders and leaders of legendary roots group Boukman Eksperyans. Paul Beaubrun moved to New York City in his teens to cultivate his own artistic identity. A unique and transfixing sound he calls ‘Roots/Blues’, Paul weaves his impeccable guitar skills, rich vocals, musical ingenuity and multi-cultural history together; all while performing a smooth melange of both English and Creole. Recently he has been playing along side icons like Jackson Browne, Rosanne Cash, Marc Cohn and Eddie Vedder at the Beacon Theatre in NYC to raise awareness against Gun Violence and opening for Ms. Lauryn Hill where he received standing ovations at Massey Hall in Toronto. He has also been performing with and gaining appreciation from bands and artists such as Sheryl Crow, Arcade Fire, Maxwell, Brad Paisley and David Byrne.

DJ Gardy Girault will keep the party going into the late night Bal Gede ($25 advance tickets / $30 at the door). He spins his signature raratech, accompanied by live percussion, and banda gonaïves dancers. Girault possesses a deep love for his country, and mixes beats to showcase Haitian culture, strength and beauty to the world. He has been involved with music from an early age, but the earthquake of January 2010 drove him to begin producing music with a renewed sense of urgency. His signature blend of Haitian beats (like rara, raisin, konpa, etc) and electronic music has been coined raratech or konpatech, creating a new energy in the Haitian music world. DJ Gardy is an innovator, whose intertwining of magical melodies and beautiful Haitian rhythms with modern and retro electronic music has built him a solid following in Haiti and at top clubs in the US, France, Canada and beyond.

The Festival will open with a legba from Ingrid Llera, and will also feature some top South Florida-based artists. The schedule includes Kazak (featuring singer Inez Barlethier joined her father Jan Sebon and his band); Voudou Lakay, which is the stage project of Rara Lakay; percussion and dance ensemble Tradisyon Lakou Lakay; folkloric dance from Nancy St Leger Dance Company.

The Festival also features a Kreyol Culinary Village with an assortment of Caribbean delights, locally-based music and dance ensembles, artisan activities for kids hosted by the Bass Museum of Art, and much more. The Little Haiti Cultural Center features the curated Local Artist Series in the gallery, and the Festival showcases a gede photo exhibit in the theater lobby. Title sponsor Becks Urban Canvas will activate the courtyard with some signature visual arts programs, including live mural painting.

The Rhythm Foundation is a Miami Beach based nonprofit organization celebrating its 29th season of presenting outstanding international artists and quality community events in South Florida. The Foundation presented Big Night in Little Haiti as a monthly event at the Little Haiti Cultural Center for five years, before transitioning the popular series into this annual festival. 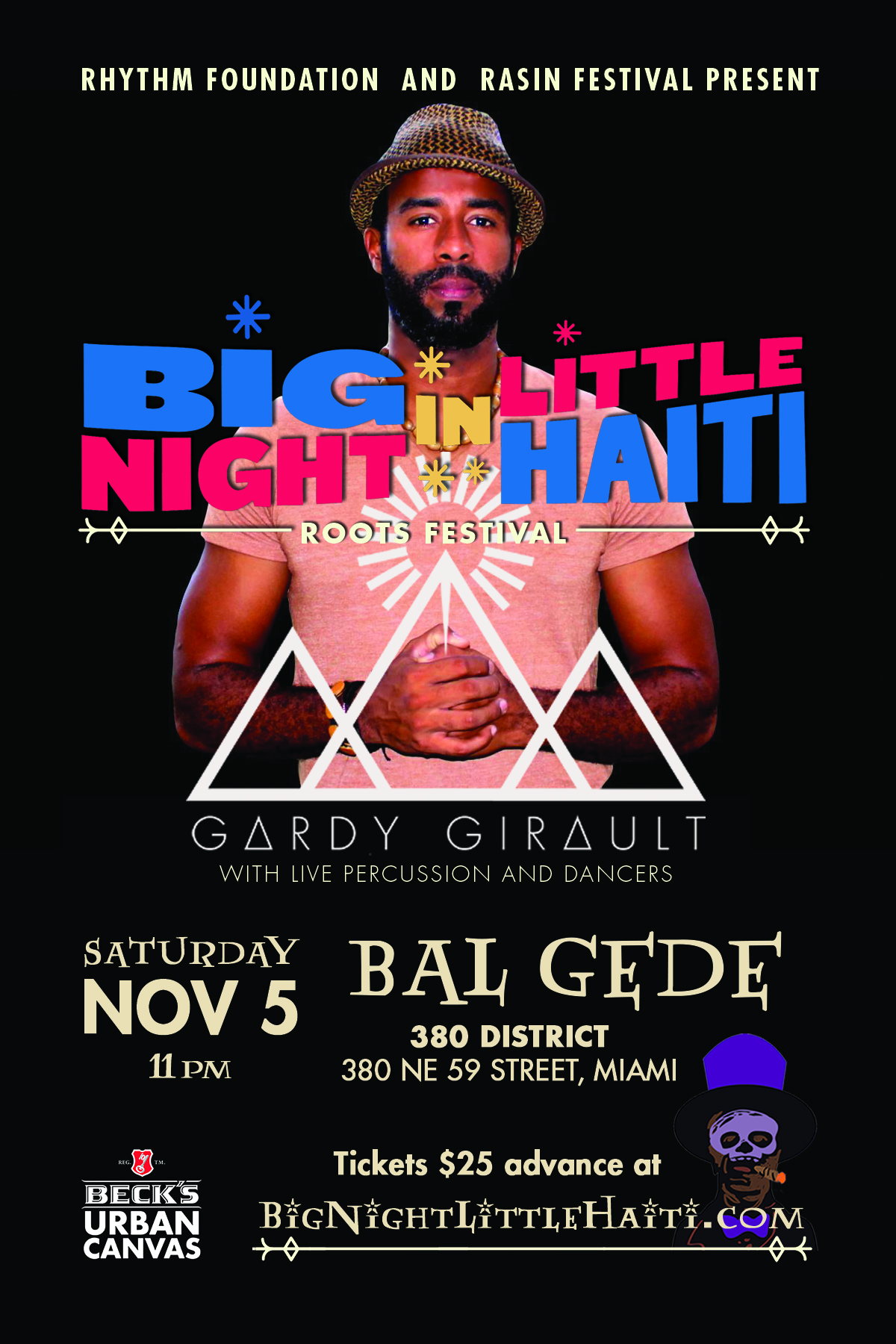