A young Haitian student was shot while seeking help at a Houston hospital by two off-duty officers, Senior Police Officers O. Ortega and  R. Law were working an extra job as security guards.

Alan Christopher Pean, a 26-year-old studying biology at the University of Houston, who has no criminal record. Alan graduated from Sharyland High School in 2007. Alan father is believed to be a doctor at a hospital in Mission. A family shaken but standing firm for answers. Tragedy hit home fast but let’s keep the pressure on the hospital and the officers for answers.

A 26-year-old man is in the ICU after he was shot inside St. Joseph Medical Center Thursday who was seeking help for his mental status, according to his family. Family members are now questioning why an off-duty officer shot Alan Pean, why the officer had to it that far and why he didn’t get the help he needed.

“For this to have happened to our brother, it’s just incomprehensible and it’s just terrible,” said Christian Pean. 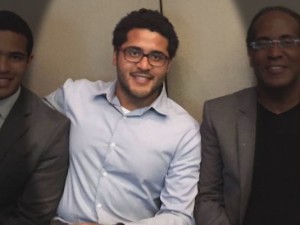 Two off-duty HPD officers working security responded and struggled with Pean, who they said became combative. It was serious enough that both officers wound up with head injuries. One even fired his taser, but police say it didn’t stop Pean.

“And it was when those methods did not work that, continuing to fear for their safety, is when the officer discharged his weapon,” said HPD spokesperson Kese Smith.

Pean was charged with two counts of aggravated assault on a public servant. Christian says his Alan was shot in the chest. He’s stable condition in the ICU and is in custody. Christian says he hasn’t been allowed to see his brother.

The family has hired high-profile attorney Mark O’Mara, who got George Zimmerman acquitted in the Trayvon Martin case. O’Mara is arrived in town Friday.

“We have questions of why and how. It seems as though there was a systemic breakdown, I don’t know how it got to the point where those officers got to a position where they had to protect themselves. If Alan was acting in a way that should have been addressed by the hospital, we want to find out,” O’Mara said.

Christian doesn’t know what happened in that hospital room, but Christian says there’s more to his brother. The 26-year-old is studying biology at the University of Houston, he has no criminal record and, Christian says, he’s never been violent before.

“Alan Pean’s family has hired me to represent their son and brother in the struggle that lies ahead. The family has told me that Alan went to the hospital to seek help for a mental health condition. Unfortunately, He condition worsened at the hospital, an altercation ensued, and he was shot. Now Alan is recovering, and his condition is uncertain, and there is a lot we don’t know. The family needs answers about what happened to Alan. I’m here to help them get those answers, and I have had brief contact with law enforcement and will be working to figure out what happened and why.”