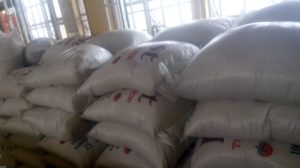 The last couple of days we’ve been tagged and emailed on all of our social networks about a video (below)  of what appears to be fake rice being sold to families in Haiti.

Since this is the first time we are hearing of plastic rice being sold anywhere in the world, we decided to do some reasearch on our own and provide a few links for readers to refer to. Below is the results of what we found:

According to Snopes, reports hold that plastic rice made in China has flooded Western markets, China has been routinely caught producing fake plastic rice for years now. Sometimes the rice is also made from potatoes to mimic rice. These fake rice grains look exactly like rice but remain hard after cooking.

They’ve been trying to sneak this fake rice to cut costs for years now and most American consumers are none the wiser.

An undercover journalist with the Blue Ocean Network, a popular English channel in China, exposed Wuchang rice in China for being mostly fake. In each bag, a small amount of real rice is mixed in with the fake rice, sprayed with a fragrance to mimic the smell of rice, then packaged and shipped all over China. He uncovered that, of the 10 million tons of rice Wuchang produced every year, about 9 million isn’t even actual rice. Even more disgusting, eating three bowls of this rice was found to be equal to consuming an entire plastic bag, which is dangerous for your health and terrible for your digestive system. It could potential be fatal.

Between 2011 and 2016 the story intermittently made the social media rounds, losing even the very basic details from unfounded reports that the faux food was purportedly fabricated from other edible starches (such as sweet potato or potato) and distilling it simply to an issue of “plastic rice.”

In October 2016, the claim recirculated on Facebook and inspired blog posts anew, such as verbatim details of the years-old claim reproduced on alternative health blogs.

As of October 2016, the plastic rice panic was still going strong both in and outside the United States. A 17 October 2016 article in The Hindu lamented the routine belief such blatant adulteration was common in spite of food safety regulation processes. – Continue Reading on Snopes.

Evidence Of Fake Rice In Haiti?

By May 2015, the plastic rice rumor had hit a fever pitch in Indonesia. One English-language source reported on the initial panic — and that testing had revealed the claim was false. On May 26 2015, National Police chief General Badrodin  Haiti, after a meeting with the president and other top officials, announced that all of the other tests were negative, so there never had been any plastic rice. He advised the public to stop panicking over the issue but Sucofindo had come up with different results? Badrodin said Sucofindo may have been using different analysis methods or contaminated equipment.

On December 28th, Sentinel.ht reports,  authorities in Haiti are just beginning to come to grips with the growing prevalence of plastic rice, said to have been imported from China, first discovered in Haiti in early November 2016. Deputy Abel Descolliens (Mirebalais(1)/PHTK) and the Mayorship of Mirebalais have seized upon the issue only after a family in the town had one of their children, who had consumed the product, fall ill.

The family which was affected by their daughter consuming the rice said it was purchased from a neighbor. The mother intended to make a blended rice juice with it. A female child had consumed some of the first batch of jis diriz, rice juice, before the family discovered something wrong. They discovered that the rice, by the manner of its consistency when other batches of the juice were cooled in the refrigerator, was not a natural produce.

The provisional administration of President Jocelerme Privert has not addressed the plastic rice detected in the Haitian market. A video was posted nearly 7 weeks before the Mirebalias incident on November 7, 2016. In both instances, consumers were attempting to make jis diriz. It appears by this method of preparation, the plastic properties of the rice become more profound.

The alert over plastic rice in Haiti is the first consumer-initiated quality control scare since the 2012 scandal of salami. The imported meat product from the Dominican Republic was found to contain high levels of feces. In 2010, it was from a United Nations peacekeeper base in Mirebalais that the water sources in Haiti would be contaminated with cholera. Deaths from cholera, which had never been detected in Haiti before, topped 10,000 in the first five years.  – Continue Reading Here 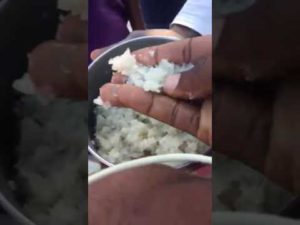 Cnn reports, on December 23rd, the Nigerian Custom Service said it intercepted 102 bags of a brand called Best Tomato Rice after the recipient of a gift of rice alerted authorities.

The health ministry released a statement on Friday urging Nigerians to remain calm after preliminary findings found no evidence that the rice was plastic or consisted of toxic chemical substances. Yet, the country’s National Agency for Food Drug Administration Control has not released their investigative report.

The health minister’s statement contradicts earlier reports from customs officials.  Mamudu Haruna, comptroller of the Federal Operations Unit, called it “plastic” rice at a press briefing in Lagos Thursday. “We have done the preliminary analysis on the plastic rice.
After boiling, it was sticky and only God knows what would have happened if people consumed it.” Haruna described the importers of the fake rice as “economy saboteurs” seeking to capitalize off of Nigerians looking for bargains during the Christmas and New Year holiday season. It is unclear where the shipment of rice originated. “A consultant said he was given 221 bags to distribute,” Jerry Attah, the public relations officer for the assistant superintendent of customs, told CNN. – Continue Readin On CNN
Carribean 360 reports, KINGSTON, Jamaica, Wednesday December 14, 2016, rice imports from Guyana and Suriname will now be allowed into Jamaica, after the Jamaica Customs Agency (JCA) temporarily halted the clearance of rice at all ports of entry over reports that plastic rice had entered the local market.
On Monday, the JCA stopped the shipments and met with the relevant regulatory agencies, including the Bureau of Standards (BSJ), the Ministry of Commerce, Industry and Fisheries, the Ministry of Health, and the Jamaica Constabulary Force (JCF), to verify whether the artificial rice was in fact in the country.
The concern was triggered by a Television Jamaica report on Sunday, showing a woman cooking the product. However, Minister of Industry, Commerce, Agriculture and Fisheries Karl Samuda said yesterday there was no evidence of plastic rice in samples tested by the BSJ. “The BSJ was provided with samples… and, so far, I can assure the people of Jamaica that there is absolutely no evidence of any contamination of plastic within the samples tested,” he said.
The minister said more samples will be taken from across the country to be tested and the BSJ had been asked to conduct island wide investigations into the source of all rice now in supermarkets. Read More On Carribean 360.
Facebook Comments

Who Is Jovenel Moïse? Haiti’s New President Once A Little-Known Banana Exporter
Kirk Franklin “Rise Up For Haiti” Jan 12th Concert In Port-au-Prince