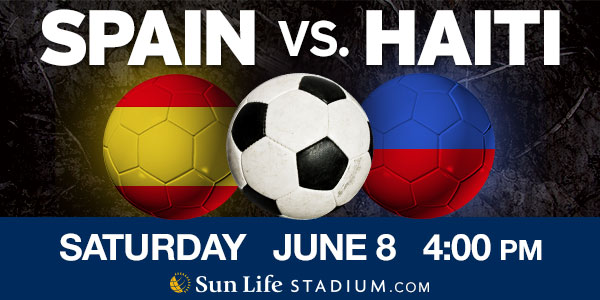 I am so excited yet sad I will not get to see my brother Saurel Boyen Olrish play Spain today, but I am confident Haiti is going to bring home a win.

Today, Relevent Sports, Sun Life Stadium and RSE Ventures announced soccer powerhouse Spain and its full squad of stars will face off against Haiti on Saturday, June 8 at Sun Life Stadium. The match marks the first time in history the two sides have met and the first time Spain has played in South Florida. One dollar per ticket will go directly to Project Phoenix, helping to rebuild Haiti after the devastating earthquake in 2010. Additionally, fans that purchase tickets will receive complimentary access to both team’s practices at Sun Life Stadium on the day prior to the match.

“We are thrilled to be bringing together arguably the greatest national team of all time in Spain, and what can be considered one of Miami’s home town teams to face-off in Miami with such a noble cause at its core,” said Relevent CEO Charlie Stillitano. “Soccer fans in South Florida can look forward to watching the defending World Cup and European Champions, fielding some of the top players in the world, battle a formidable team in Haiti who currently have ten players competing in the top European Leagues. International soccer continues to experience unprecedented growth in the United States and a game of this caliber is just what soccer fans in South Florida deserve.”

The Spanish National Team has occupied the top position in the Official FIFA World Ranking for the last 5 years and is considered one of the best teams in history. Spain is the first national team to win three consecutive European and/or World titles: Euro 2008, 2010 World Cup and Euro 2012. After the match against Haiti, Spain will participate in the 2013 Confederations Cup in Brazil. Having reached the final phase of the World Cup on thirteen occasions, Spain is one of the most successful national teams in the world.

Following the match against Haiti, Spain will participate in the 2013 Confederations Cup in Brazil. With thirteen World Cup appearances, Spain is one of the most successful international squads in the world. Haiti, a perennial top 50 team, most recently won the 2007 Caribbean Nations Cup. The national team last played in Miami in July 2007 against then Copa Libertadores champions, Boca Juniors. The match is the second time that Haiti will play a current World Cup champion. The Haitian roster will include top players such as Jhony Placide, Jeff Louis, Jean Jacque Pierre, Jean Sony Alcenat, and Reginal Goreux.

June’s match will directly support the Haitian community by not only donating one dollar per ticket sold to help construct a national team stadium in Cité Soleil, Haiti but also develop a surrounding community center. Additionally, 100% of proceeds of a specially designed jersey sold at Sun Life Stadium will go directly to the development efforts. Lastly, children will have a once-in-a-lifetime opportunity to walk out on the Sun Life Stadium pitch with their favorite players.