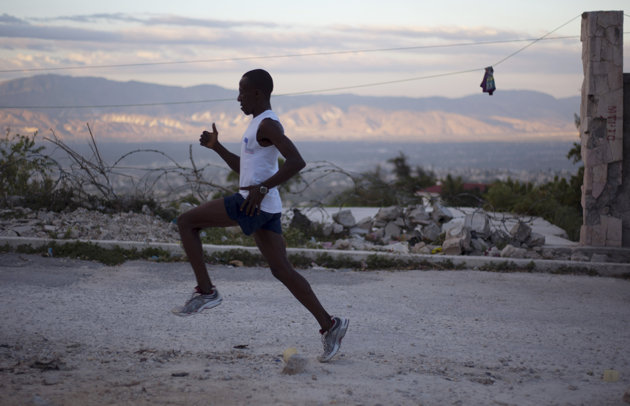 The Haiti humanitarian group for Hollywood actor Sean Penn announced Friday that it will sponsor five Haitian runners so they can compete in the New York City Marathon in November.

Penn’s J/P Haitian Relief Organization will accept the top three men and two women finishers in a rare half-marathon that will wind through the Haitian capital of Port-au-Prince on Sunday.

Ron Baldwin, executive director of J/P HRO, said the decision to sponsor Haitian runners in the world’s largest marathon was inspired in part by an Associated Press story. The January report featured a Haitian distance runner named Astrel Clovis who faces numerous obstacles as he runs through the hilly streets of Port-au-Prince three years after the Jan. 12 earthquake devastated the capital.

“It’s an inspiring story,” Baldwin said of Clovis. “After the earthquake, he’s running. He’s self-training, and has no support. We decided let’s give that guy a chance. And it grew from there to build a whole team.”

Clovis has a good shot at making the cut for New York. He is a favorite among the more than 50 registered runners participating in Sunday’s government-organized race. He finished second in a marathon in neighboring Dominican Republic in December with a time of 2 hours and 42 minutes.

“This is my dream — to participate in a marathon, out in the world,” Clovis said by phone. “I’m very excited to represent Haiti in the New York marathon, if I qualify.”

J/P HRO has secured 10 spots for the marathon, five for the Haitian runners and another five for celebrities and philanthropists who will participate to raise funds for the group.

“What prompted this was just the impulse to give the runners an opportunity that they wouldn’t have otherwise,” Baldwin said.

Penn founded J/P HRO shortly after the 2010 earthquake, and has since become an ambassador-at-large for Haiti. His charity has relocated most of the displaced people from a camp on a golf course in Port-au-Prince — one of many such camps in the capital — and demolished the National Palace, which collapsed in the temblor.

J/P HRO will secure sponsors to cover airfare, visa fees and lodging for the runners. The group will also support the Haiti team as it trains with the Haitian Amateur Athletics Federation for the marathon.