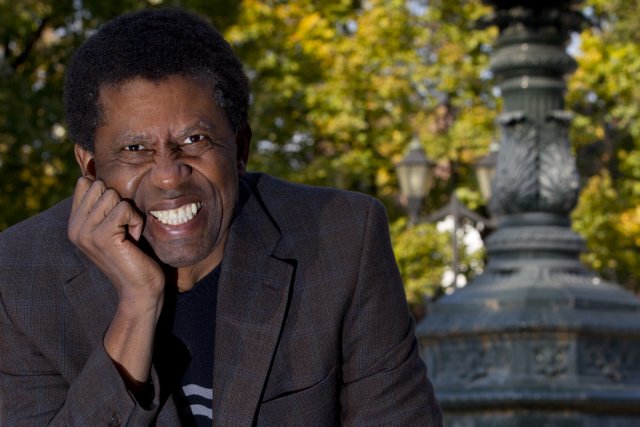 Congratulations to our Haitian brother Dany Laferrière on an absolute job well done.

Haitian-Candian author Laferrière, who has since authored close to 20 novels, was elected to Académie Française in December 2013 but he formally took up his seat at an inauguration ceremony at the institution’s Paris headquarters with the typical pomp.

Dany Laferriere is now an Immortal after being elected to the L’Academie francaise on Thursday, the highest honor granted in the French language, the first such honor granted to to anyone of Haitian origin and he becomes the second black to receive the honor.

He was raised in a small village in Haiti and came of age as a novelist in Montreal, working nights as a janitor after fleeing the Haitian dictatorship of Jean-Claude Duvalier, a.k.a. Baby Doc, in 1976. Now, Dany Laferrière has become the first non-French citizen inducted into the Académie Française, the inner sanctum of French letters and august protector of the language.

His induction on Thursday, before an audience including President François Hollande and political leaders of Quebec and Haiti, was seen not only as a great achievement for the writer, whose friends and family filled the atrium of the academy’s home at the Institut de France with a standing ovation, but also for the wider French-speaking world. It also pointed to the academy’s efforts to allow some fresh air into la langue.

“I feel immense joy,” Mr. Laferrière, 62, a Canadian citizen, said after the ceremony. He wore the signature costume of academicians: a black tailcoat embroidered with green olive branches that in his case a Montreal embroiderer spent 500 hours sewing, and a metal sword specially made by a Haitian sculptor with references to Legba, the Voodoo deity of crossroads.

The academy members, with an average age around 70, are known as “immortals” and serve for life. There are 40 seats but currently 39 academicians, after the death in February of the Algerian-born novelist Assia Djebar. Other academicians are writers, social scientists, a few politicians and one cardinal.

The elite club was founded in 1635 by Cardinal de Richelieu to help centralize France by unifying its language and grammar. Its mandate now is to safeguard the language and update a major dictionary first published in 1694, culling anachronistic words and introducing new ones, and to advise on usage. The club is generally seen as having a conservative mission, making sure French isn’t polluted by the corrupting encroachment of, say, English.

Mr. Laferrière is the second black person elected to the academy; the Senegalese writer and statesman Léopold Sédar Senghor was first, in 1983.

Following protocol, Mr. Laferrière wrote a letter to the academy saying he would like to be considered. Months later, in December 2013, he was visiting Haiti when he got the call saying he had been chosen. “I felt the weight of it,” he said in an interview this week. “It wasn’t so important to win, but it was important not to lose.” – Continue Reading Here

About 500 March Against Deportation of Migrants to Haiti and Zimbabwe From Canada
TCI Finance Minister “If You Want To Be In Jamaica, Haiti or Bahamas, Stay there”