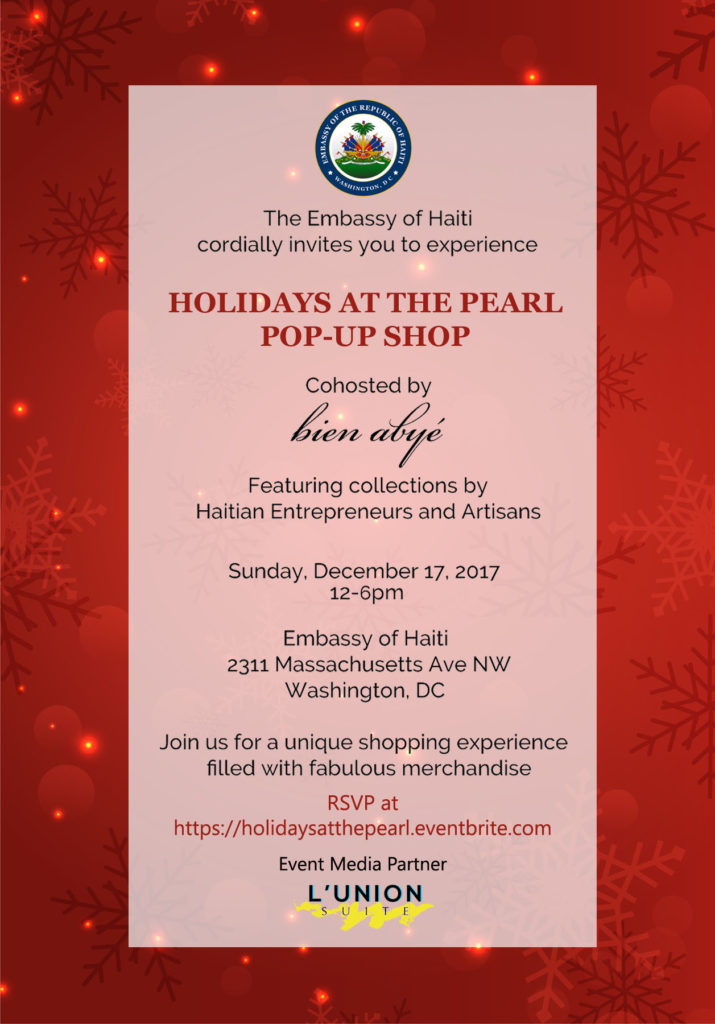 In the spirit of the Holiday season, the Haitian Embassy will host a second pop-up shop, “Holidays at the Pearl”, on Sunday, December 17, 2017 from 12pm to 6pm. After the tremendous success of the inaugural pop-up shop held at the Embassy on May 21st to close out Haiti Week in DC 2017, this memorable shopping experience will celebrate the holiday season while supporting Haitian entrepreneurs and artisans.

The initiative is being organized to offer the general public an opportunity to experience a Haitian Christmas while also doing some holiday shopping. On the occasion, the Embassy will be transformed into a Haitian Winter Wonderland where Haitian-American entrepreneurs who are contributing to the reclaiming of Haiti’s title as the Pearl of the Antilles will display their collection of products sourced and/or inspired by Haiti, including clothing, fashion accessories, home goods and gourmet products.

In addition to viewing and purchasing these marvelous products to the sound of Haitian Christmas music while savoring the Embassy’s signature punch, attendees will have the opportunity to meet and interact with the designers and entrepreneurs behind the brands listed below.

Christelle Chignard Paul is the founder and owner of Atelier Calla, an artisan workshop based in Haiti specializing in production of jewelry and home goods made of horn and wood. Having been raised between Europe and Haiti and having had the chance to travel in many places in Africa, Europe and the US provided the fuel to a growing curiosity for everything beautiful, especially in the arts and architecture. This experience encouraged her to make craft and jewelry her favorite pastime, even selling a few of her creations to classmates and friends. After university, Christelle came back to Haiti and worked in the banking and corporate sector for fifteen years, which meant shelfing her favorite hobby. Seven years into her career, the itch to create her own jewelry struck again and this time nothing could stop her.
First trying her creations with her colleagues, it slowly and surely developed into her fulltime activity and diversified into tableware, home décor, and custom made furniture. That is how Atelier Calla workshop opened in October 2011 and how many encounters have helped shape this self-taught designer into a reference in Haitian handmade craft in horn, bone, and wood. Christelle has collaborated with internationally renowned designers such as Mrs. Donna Karan and Mrs. Isabel Encinias, Mrs. Chan Luu. She has produce product for companies in the USA which includes Macy’s, Elisa C., Miossa, Bloom and Grace. Atelier Calla has grown to include eighteen artisans who are deeply involved in the process of production, receive training to ensure the best results, and provide financially for their family.

Idanoise Joseph is the founder of Ida J. & Company, a start-up gourmet dessert & catering business located in Brooklyn, NY. Self-taught in the culinary arts in Haiti, Idanoise started this company to bring awareness of the Haitian food and dessert culture to NY giving the Haitian community a taste of what they remember from back home. Born in Corail, Grand’Ance Haiti, Idanoise had a passion for cooking and was inspired to utilize her skills to show the world some of the best foods from her homeland Haiti. She moved to Brooklyn, NY in 1982 with her husband, Fils Joseph and a dream of one day becoming a businesswoman. Idanoise was working full-time as a home health aide while taking care of her 6 children.

In 2015, Idanoise started making confiture (means fruit jam) from home as a hobby and received praises from family and friends and was encouraged to turn it into a business where she can make a profit. At the age of 62, Idanoise has left her job to be a full-time entrepreneur. To date Idanoise now offers a variety of Haitian inspired products such as Confiture Peau Chadeque (Grapefruit jam), Confiture Ananas (Pineapple jam), Confiture Guava, Tablet (peanut brittle), Piklis (spicy pickled cabbage), Cremas (Cream Liquor) & much more. Today, you can find some of her products in well-known establishments such as Le Bon Pain Bakery in Queens, New York.

Eddy Albertini is the artist behind Deux Noirs. His long standing interest in photography, music, and art has brought out a strong passion to create Deux Noirs artwork reflecting everyday Haitian lifestyle. An Award Winning Retail Design Executive with a distinguished career of creating visionary retail design concepts that strengthen brand positioning for PVH a Fortune 500 company. He has designed high-end full line department stores in the United States and completed projects from London, Japan, China, Australia and Costa Rica.

Eddy is a Retail Architect and his pioneering approach to design responds to brand context and enables integration of both the natural and strong brand environments. He has completed numerous design projects ranging from a single fixture design to entire new store concepts across multiple brands. Calvin Klein, Van Heusen, IZOD, Arrow & Speedo are brands that his design leadership contributed to increased sales. In short, his over 25 year experience in retail architecture design has proven to be an outstanding career. In addition, to his design career, Eddy is also heavily involved in a few non-for-profit organizations, in the US and in Haiti. He is also a board member of Fleur De Vie.

Stephanie Cavé, a native of Haiti and founder of Kapha Group, is an artist at heart as well as in practice. Her formal education is in law where she completed her studies at Quisqueya in Port au Prince. After working in the field for over fifteen years in both Haiti and the United States, Stephanie decided to make a shift and focus on promoting the colorful Haitian heritage through the creation of Kapha Group. Kapha Group was born of a strong calling and need to show the world the “other” side of Haiti and help change the narrative by crafting a set of tools to help build support and bring sustainable improvement in the quality of the life.

Kapha Group presently focuses on two main projects: “Kapha Gallery” is dedicated to the promotion of fine arts and handcrafted home décor items made in or inspired by Caribbean region. The aim is to support artisans by providing a platform to the makers to help them reach customers on a global scale. “Kapha Designs” is a women’s clothing line inspired by the Caribbean culture. The Kapha clothing label is effortless style with a relaxed, comfortable yet chic feel made from quality natural fibers. Kapha Group is a socially responsible enterprise that strives to bring awareness to Haiti and help stimulate the Haitian economy. A portion of the company’s profits will be given annually to a charitable organization in Haiti with continuing support and full transparency.

Dayanne Danier is the fashion designer behind the women’s contemporary ready to wear brand called Bien Abyé (means Well Dressed). The brand personifies a simple philosophy: to make women look fabulous at all times effortlessly in S7VEN. Dayanne has developed distinctive capsules that allow women to shop for their wardrobe in a way that makes their life easier. Bien Abyé has been presented in numerous cities throughout the United States and has exhibited in Boston, New York, Washington DC, Atlanta, Miami, and Haiti. Danier has extended the Bien Abyé brand to include a collection of silk accessories. The vignette of prints are reflective of some of her client’s favorite silk styles from Bien Abyé apparel line transformed into the perfect accessory.

The styles are currently made in USA and Danier has plans to have the group produced in Haiti by women artisans as a part of her ethical fashion/empowering women initiative. Currently, Bien Abyé is available in stores in New York, Boston, New Jersey, Dallas, Pittsburgh, and online at www.dayannedanier.com Prior to starting her own brand, Dayanne Danier grew up in Massachusetts and attended Massachusetts College of Art where she obtained a Bachelor Degree in Fine Arts with a concentration in Fashion Design. Her background in the fashion industry extends over a decade working as a designer for such places like Blauer Manufacturing, Perry Ellis International, and Phillips-Van Heusen.

Are Haitian Parents Too Involved In Their Children’s Relationships?
Innovative Brand, Oluwa & Celestin, Brings Luxury Afro-Caribbean Fashions to the Forefront