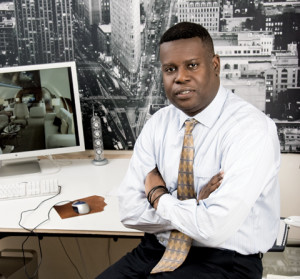 Edése Doret Industrial Design, Inc was founded in 1991 by Haitian-American designer Edése Doret, the company has distinguished itself by developing a process of concurrent, multidisciplinary innovation and establishing a reputation for  creating exquisite environments for it’s clients to relish in.

The innovative company has made many headlines. In 2011, Edése Doret designed the first VIP Interior for an Airbus A380 which transformed a Lockheed L1011-500 into a “Flying Casino”, the first of its kind.

Edése Doret was born in Haiti and raised in the Bronx. At the age of 30 he opened his own specialty interior design business that made him the first person to ever design a private interior for an Airbus A380, and the chosen designer for billionaires and dignitaries all over the world.

The Airbus A380 is the largest passenger airliner in existence. It has two levels and enough room for 600 passengers. Edése Doret has been given credit for being the pioneer of luxury travel, changing the way the wealthy traverse the world whether by airplane in Airbuses or by water in yachts and cruise-liners.

His clients include rich Angolan and middle eastern oil firms, the Kuwaiti airforce, celebrities and many heads of states. “All of my private customers are billionaires,” Doret said in an interview with Uptown Magazine.

“It’s almost a hip-hop way of designing,” he also told the magazine talking about his non-traditional approach. Instead of carpet, he prefers to use wood or marble floors, he favors freestanding structures such as entertainment centers to break up the interior space instead of walls. Doret is one of the only African-American independent aircraft designers in the world.

Doret’s firm, Edése Doret Industrial Design, is based in New York. His company and work has been featured on CNBC, CNN Mondey, Forbes and many other publications. The company site reads:

Our process has been our clients’ unfair advantage… at Edése Doret Industrial Design our creative process draws on experience, design research and unique mix of talent and managerial expertise to create interiors that stimulate the senses, engineer products that people love, graphics that mean something and environments where people want to be. With an interdisciplinary team of designers, strategists, and environmental artist, Edése Doret delivers connected experiences that span multiple technologies, platforms, and media.

The site says the company was founding in 1991, this would be when Doret was 23.

Go here to visit the company website and read more about them.

Welterweight Andre Berto KnockOut Josesito Lopez in 6th Round
Video of The Day: “Made for New York: Meet Fritz Francois”