Haitian American Nerlens Noel, the #1 High School Basketball Player in America (rated by ESPN & Rivals) has chosen to play for The University of Kentucky Wildcats. At 6′ 10″ tall, he is projected to be a Top 5 NBA Draft pick next year.
Nerlens Noel (born April 10, 1994 in Everett, Massachusetts) is a Haitian-American college basketball player. Noel is a freshman at the University of Kentucky. He plays center, and was one of the top high school basketball players in the class of 2012. He is known for his trademark hi-top fade hairstyle. Noel was originally a part of the class of 2013, but reclassified to the 2012 college recruiting class. He was rated as the #1 player in the class of 2012 by ESPN and Scout.com,and the #2 player by SLAM. Noel was selected to play in the 2012 Nike Hoop Summitand the 2012 Jordan Brand Classic. Noel decided in April 2012 that he would be going to Kentucky to play Division I basketball. – SOURCE

Noel decided in April 2012 that he would be going to the University of Kentucky to play NCAA Division I basketball. He made his verbal commitment by revealing the UK logo shaved in the back of his head on national television.[10] Since Noel was well known for his elite shot blocking abilities, fans and the media had high expectations for him to fill the shoes of Anthony Davis, who had just Kentucky to a national championship in the previous season, was the 2011-2012 National Player of the Year in the NCAA, set a Kentucky and NCAA freshman single-season block record with 186, and became the No. 1 overall pick in the 2012 NBA draft.

On Jan 29, 2013, Noel set the UK single-game record with 12 blocks in a 87-74 team victory over Ole Miss. 5 of the blocks happened while Noel had 4 personal fouls, and two of them were slam dunk attempts. The UK school record was previously 9 blocks in one game, set by Sam Bowie in 1981 and tied by Andre Riddick in 1993. Although he recorded only two points, Ole Miss coach Andy Kennedy said in the post-game press conference that “[Noel] was the difference in the game” and that he is “an incredible defensive presence.” Ole Miss senior foward Murphy Halloway added that he believes Nerlens Noel is the “best shot blocker [he has] played against,” including Anthony Davis. 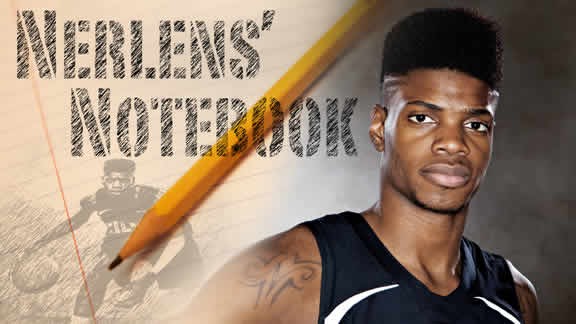