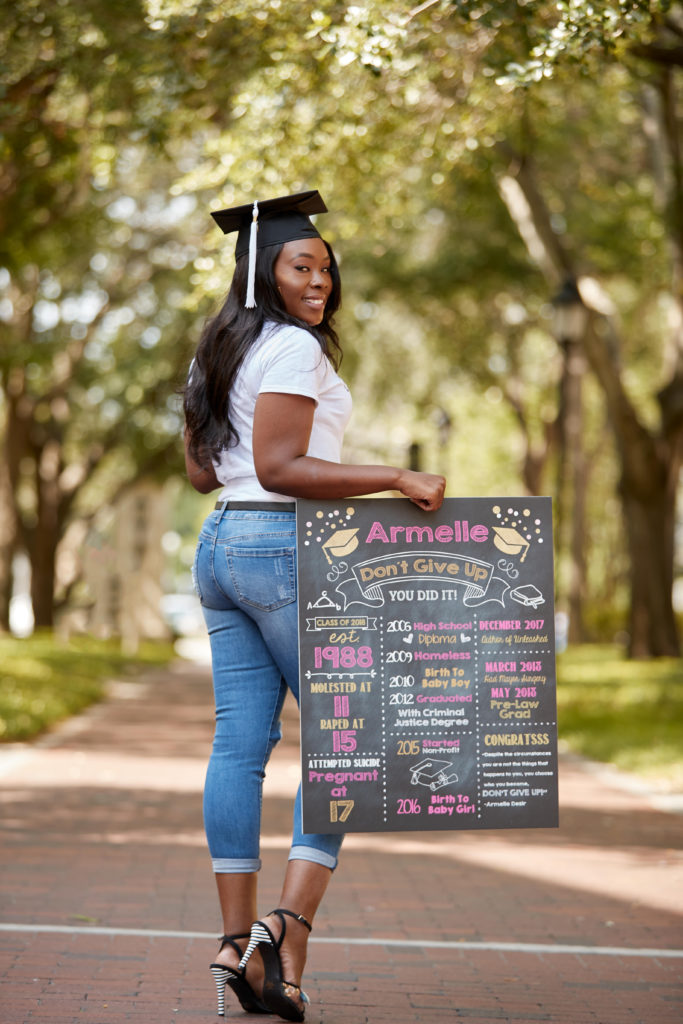 When Haitian-American Armelle Desir, a recent pre-law graduate of the University of Florida shared her graduation photos, she was stunned by the responses she received online. Desir bravely used her graduation photos (and a handmade chalkboard sign) to boast about her accomplishments and setbacks, as most graduates tend to do. But Armelle has a unique and somewhat tumultuous story.

Desir candid language and attitude about the taboo topics molestation, rape, homelessness, depression, suicide and teen pregnancy provoked critics and supporters to share their opinions. Tweets (amongst the 2,000+ tweeted and 10,000+ likes) shamed Armelle for “putting her business out there” while others commended Desir’s ability to move forward and her bravery to share her story so openly.

In the era of the #MeToo movement, survivors of sexual abuse and attacks are more likely to speak out in an effort to educate or provide support to others who may be going through the same. Desir has made it her duty to empower and heal through sharing her story. We recently sat with Desir to discuss the graduation photos and her reaction to her story going viral.

I thank you all for allowing me to share my story. You have played a major role in helping so many people who are suffering.

Looking up graduation photoshoot ideas, I saw several graduates with a board that detailed their major and next steps in their education and career. Mine however just told a different story. I liked the concept so decided to do something different and tell my story leading up to the day of graduation but in a timeline. Seeing it written out in front of me really gave me more motivation to keep going especially when I saw how far I’ve come. I beat the odds.

According to statistics I should’ve been dead, suffering from a mental illness, or on drugs. So I decided to post it and share and give others who faced the hardships that I did hope and motivation. I want others especially other victims to see the major things I went through and where I’m at now. I want them to understand that they are not their past and the things that happened to them and they have control over their lives and can choose who they become.

How did you overcome so much?

Honestly, it may sound cliché but it was only by the grace of God and a wakeup call I had in 2009. I was at rock bottom, I was homeless, unemployed, with a child and suffering from depression. It was at that moment that I realized that I could either continue to allow my past to affect me or I can choose to Unleash myself from it and move forward and live a life I was destined to have which is a life of happiness and success.

Did your family support you?

I’m Haitian and in the Haitian community, the conversation about sex or sexual abuse etc is taboo. They do not talk about it and when it happens it’s kept a secret. So when I first opened up about what happened to me I wasn’t believed and I strongly believe it was for reputation sake and the fact that my abuser was a provider for my family and my family didn’t want to lose out on that. The support was still not there when I became a teen mom which was no surprise to me. Often times when you have a child at such a young age in the Haitian community you don’t get much support.

I had my daughter when I was a teenager my senior year in high school and I was with my child’s father so my parents didn’t see any need to help me because that was now supposed to be his responsibility. So I moved in with him. My mom would watch my daughter if and when she could but my father was more strict and didn’t feel like I should get the help since I decided to be grown and have a child so because of the friction I choose to raise my daughter myself. When I got married and had kids with my husband they were more helpful and supportive. As for the viral post my sisters especially my twin have been super supportive. They have defended me a lot lol.

What do you think about the negativity surrounding it?

Honestly, I was surprised at first because I don’t understand how others can be so negative about something so positive. But then I remembered my purpose and new that I couldn’t take it personally, however, I would explain myself when necessary (responding to comments and tweets) as others didn’t know who I am and what I do. They saw me as this black Haitian girl telling her business, not as a victims advocate, empowerment speaker, and author who has worked and helped other victims, so it made a little bit of sense.

I was also disappointed because most of the negativity and backlash came from a lot of my own kind. It just revealed to me how our people really are stuck on the mentality of keeping bad things that happens to us or that affects us to ourselves because growing up that is what most of us are taught. We are taught to keep household business to ourselves. So it just pushed me to work harder on helping our people to unleash themselves from such mentality so those who go through or who have been victimized don’t have to suffer in silence. This will help decrease the number of suicides, addicts, broken and mentally ill people in our community. So despite the opinions and negativity, I WON’T BE SILENCED.

How does it feel to see the women who thanked you and said its empowering?

It’s a blessing and it tells me that I am serving my purpose and that I’m on the right track. I have always been an advocate for other victims and very open about my story and what happened to me. My goal is to be the voice for the voiceless and hope for those suffering in silence. Especially those in the Haitian and Black community where the topic of sexual assault and violence is taboo and swept underneath the rug. They need to know they’re not alone, they have support, and that despite everything there is hope. That is why I started my non-profit organization The Gift of Hope and wrote my book Unleashed (From Pain to Purpose).