A Haitian-American Douglas County attorney will be the newest judge presiding over Superior Court. Cynthia C. Adams was appointed by Gov. Nathan Dealon on February 13, 2017 as a Superior Court judge of the Douglas Judicial Circuit. The Haitian Atlanta native and D.M. Therrell High School graduate was a two time Intern in the Atlanta Bar Association Summer Law Internship for HS Students in the Program’s first two years in 1993-1994. Cynthia will be the first former Atlanta Bar Summer Law Intern to serve as a Superior Court Judge. 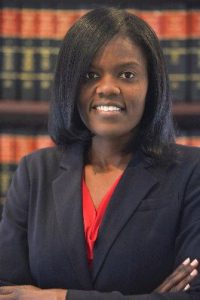 According to West Georgia Neighbor,

Adams said she was “honored and humbled to have been selected to serve the citizens of Douglas County on the Superior Court bench.” She will fill the vacancy created by the recent resignation of Robert James. Her appointment will take effect upon being sworn in, the governor’s office said.

“I am following in the footsteps of an amazing jurist, the Honorable Robert J. James, and joining the ranks of two remarkable judges currently serving, Judge David Emerson and Judge Beau McClain,” she said.

Adams, said she “was certainly hopeful” she would be chosen from among the three finalists.

“I had a wonderful meeting with Gov. Deal last week and was able to share with him my legal experience as a prosecutor and in private practice and my commitment to serving Douglas County,” she said.

“I consider it an incredible honor that Gov. Deal selected me,” she said.

She said she plans to approach her new job responsibilities “each day with a deep respect for the law in my role as a judge.”

“I plan to be firm, but fair to all parties and attorneys and to run an efficient courtroom in the administration of justice,” Adams said.

Adams is Judge Pro Tempore of the Douglas County Juvenile Court and a solo practitioner at the Law Office of Cynthia C. Adams on Dorris Avenue in Douglasville. She earned a bachelor’s degree from Oakwood College and a law degree from the University of Georgia School of Law. Adams and her husband have two children and reside in Douglasville.

According to her firm’s web site, she served as a prosecutor in Fulton County as a solicitor, prosecuting misdemeanors, before working as an assistant district attorney and prosecuting felony cases including drug trafficking, rape, murder, armed robbery, and burglary. While at the district attorney’s office she was assigned to the special victims unit where she prosecuted crimes committed against children, such as child molestation and child homicide, the website stated.