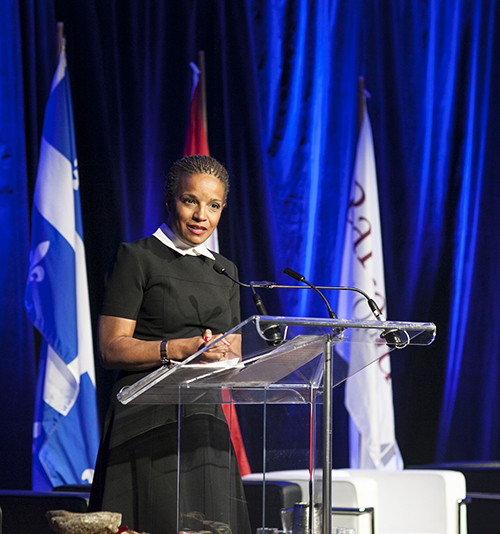 On Tuesday, February 7, Tamara Thermitus was named head of the Quebec Human Rights and Youth Rights Commission, becoming the first person of African descent to hold the position. Thermitus, an anti-discrimination lawyer of Haitian origin receive the unanimous support of members of the National Assembly.

According to Montreal Gazette,

Her appointment comes more than a year after Jacques Frémont left to become rector at the University of Ottawa. Thermitus’s name had been circulating at the National Assembly, but opposition parties suggested last fall they could block her nomination because she was too “multiculturalist” and too close to Liberal Economy, Science and Innovation Minister Dominique Anglade, also of Haitian origin.

Reached by the Montreal Gazette on Tuesday, Thermitus said with a hearty laugh that she is “obviously very happy” with her new title, but declined to comment any further since the news was still “too fresh.”

“Right now, I have someone I need to thank who supported me, and that trumps everything else,” she said.

Thermitus is an award-winning lawyer who worked for Justice Canada, and who was involved in the Truth and Reconciliation Commission.

From 2004 to 2010, she was president of the Quebec Bar’s committee on cultural communities. She was among the first to raise issues of racial discrimination within the profession, and played a key role in the development of a course on the social context of law, which is now part of the compulsory curriculum for professional training at the Bar.

The McGill University graduate served as director of Policy and Strategic Planning for the Office of Indian Residential Schools Resolution Canada at the Ministry of Justice.  In 2011, she became the first Black woman and the first Ministry of Justice Canada lawyer to receive a Prix Mérite from the Quebec Bar.
Her life of activism reaches far back into her career when she took a vocal stand against racism in the legal profession.

“(The appointment) sends a very strong signal about the place that people coming from diversity must occupy in our society,” Premier Philippe Couillard said.

“Our Quebec house is large enough for everyone.”

“We’re going to have a human rights commission that cares about human rights,” said QCGN vice-president Geoffrey Chambers. “She (Thermitus) has a strong reputation as a human rights lawyer,” he said, adding he thinks Thermitus will “protect the little guy.” – Continue Reading on Montreal Gazette

According to Premier Philippe Couillard, the appointment of Thermitus sends a very strong signal about the place that people from diverse backgrounds must occupy in our society. Strong words well spoken would be better if adhered to. Parti Québécois then-leadership candidate Jean-François Lisée in September 2016 pointed out the presence of systemic racism in Quebec, and called on the government to spring into action rather than hold public consultations.

In response, Couillard’s government said it would soon announce a plan to look into the issue. Since the creation of the Quebec Human Rights Tribunal in 1990, the Human Rights Commission has never brought a case of systemic racism before the tribunal. The first court decision on systemic racism in Quebec was issued only in 2013 by the Superior Court. That case involved Olthene Tanisma, a Haitian-born urban planner who successfully sued the City of Montreal, after his case was stalled at the Human Rights Commission. – Source