Jean-Fernand Brierre (23 September 1909 – 1992) was a Haitian poet. Born in Jérémie, Brierre worked as a politician and diplomat. He is recognized “as one of the most brilliant Haitian writers.” Poet, dramatist, and Haiti’s ambassador to Argentina.

He emerged in the 1930s as a poet and militant in the backlash against the American Occupation (1915-34).

His thundering epic verse celebrated the heroes of Haitian independence and the black race. His Black Soul (1947) and La Source (1956) are well-known Haitian examples of the poetry of négritude. – wikipedia

According to The Haitian Times:

Jean-Fernand Brierre’s famous 1947 poem, Black Soul, became one of Haiti’s most renowned contributions to the global Negritude movement. Excerpts of the prolific narrative poem appear in numerous collections, including the celebrated, Anthologie de la nouvelle poesie negre et malgache de francaise, edited by Senegal’s first President, Léopold Sédar Senghor. Back home, Brierre was an active leader in the resistance against the American occupation. And by 1930, when he published his first major work, In the Citadel’s Heart, Brierre became a prominent voice that articulated the nation’s struggle for sovereignty and dignity.

Brierre was born on September 28, 1909, in Jérémie — once known as “The City of Poets,” for all the prominent writers (including Émile Roumer and Alexandre Dumas’ father) reared in the Southwestern port city. During the early years of his career, Brierre spent much of it in his hometown, as a teacher, and then inspector of the public schools. He would go on to serve in his first foreign post as secretary to the Haitian Embassy in Paris. During 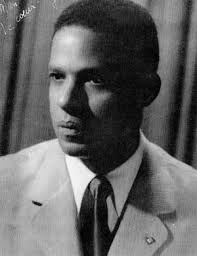 his tenure he penned, The Banner of the Future, that revealed his vision for his country.

In 1932, Brierre founded the opposition newspaper La Bataille, that published passionate voices for independence, for which he was briefly imprisoned. Brierre eventually studied law and returned to public life, serving in many high-level posts, including Under-Secretary of State for Tourism, Cultural Attache in the Department of Foreign Affairs, and Ambassador to Argentina.

In 1942, he visited the US, where he spent a year of study at Teachers’ College, Columbia University. During that year, he fostered healthy relationships with renowned African-American writers — it inspired his ode to Langston Hughes, Here I Am Again, Harlem.  Three years later, after his longtime friend Jacques Roumain passed away, Brierre dedicated a collection of poems, Let’s Preserve God, to his memory and legacy.

Throughout the 1950′s and 60′s, Brierre produced numerous patriotic verse dramas, including, Pétion and Bolívar, The Roots, Farewell to the Marseillaise and Discoveries. Even though Brierre had a distinguished career in public service, for several years he would be in and out of prison for his outspoken resistance against oppression. He was forced into exile, for the first time, in Jamaica after the Duvalier regime imprisoned him in 1961, and then again in 1964, when he moved to Senegal — where he lived the remainder of his life.

In Dakar, Brierre maintained an active career in public service and the cultural landscape. He served in the Senegalese Ministry of Cultural Affairs, and played a major role in the 1966 World Festival of Negro Arts. His landmark poem, Black Soul, was eventually translated and published in English. Here’s an excerpt:

…You were music and you were dancing,
but at the corners of your lips remained,
uncoiling with the movements of your body,
the black serpent of misery…

…Sometimes you would stand at the prow, bronze god,
moon-mist shining in the diamonds of your eyes
and your dreams would come to rest in the stars.

…You are waiting for the next call,
the inevitable call to arms.
Your war knows none but a temporary truce,
for there is no land where your blood has not been shed,
no tongue in which your color has not been cursed.
You smile, Black Boy,
you sing,
you dance,
you rock the cradle of the generations
that are still coming, that keep coming
onto the battlefields of work and suffering,
that will be coming tomorrow to lay siege to the bastilles
and bastions of the future
to write in every tongue,
on the bright pages of every sky,
the declaration of your rights,
ignored for five long centuries and more,
in Guinea,
in Morocco,
in the Congo,
and wherever your black hands
have left on the walls of Civilization
their prints of love, of beauty and of light. . .