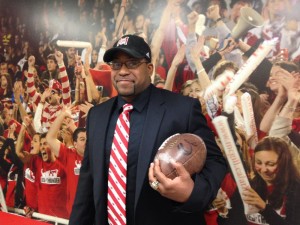 [Montreal Gazette] The 30-year-old from Laval becomes the 21st head coach in McGill football history and takes over a team that finished with an 0-8 record last season in the Quebec university league. Hilaire was named interim co-head coach, along with Patrick Boies, after Clint Uttley resigned as head coach last September. Hilaire joined the Redmen last February as defensive coordinator and defensive-line coach after leaving the Université de Montréal Carabins coaching staff.

“Coach Hilaire has been instrumental in recruiting and running the day-to-day operations of the program since our previous coach stepped down,” Drew Love, McGill’s executive director of Athletics and Recreation, said in a statement. “We are dedicated to building a winning team at McGill and he has won numerous championships over a lengthy career, both as a player and as a coach. More recently, he has overseen recruiting, which has gone very well since the season ended. I have full confidence that he is the right person to lead our football program.”

As a player, Hilaire won three Bol d’Or CEGEP championships as a defensive lineman at Vieux-Montréal before going to the University of Buffalo.

“I am very honoured and excited to lead a young group of highly motivated student-athletes,” Hilaire said in a statement. “It’s my mission to ensure our players take full advantage of what McGill has to offer on the academic plan and live an unbelievable experience on the gridiron. I am proud to be part of the institution that gave birth to football and I look forward to re-engaging our alumni from every generation and putting forth a product that they can be proud of for years to come.” – Continue Reading Here

According to @apnews, Florida reported 21,683 new

Happy Birthday to another of our L’union Suite f