Generally speaking, depression is already a very troublesome illness to cope with. Now, let’s tap into being Haitian and going through a depression. In my opinion, our society do not necessarily acknowledge what this mental disease is really all about.“Chuips! Byen ou twò byen!” (*Chuips* You’re just way too comfortable!)

These are probably the words your Haitian friends or parents may throw at you if you were to point out the fact that you’re feeling depressed. But what is this sickness? What are its causes? Its symptoms? How do most Haitians perceive it? Why should we change how we view people who are suffering with it?

First off, we must admit that being depressed can be a normal response to any emotionally intense situation. For instance, after a breakup, it’s understandable for one to feel disconnected for days and even weeks, or at worse, have a mental breakdown. Also, we all go through our ups and downs; we stumble on bad days, but as long as our negative mood doesn’t prolong itself into unhealthiness, we’ll be alright.

Now, let’s focus on that deprived state of depression; the one that keeps us from sleeping, eating, and disrupts our daily activities. Before giving a formal definition of the latter, I’d like to share an interesting quote I found online that sums up what this mental illness is about. “

That’s the thing about depression: A human being can survive almost anything, as long as she sees the end in sight. But depression is so insidious, and it compounds daily, that it’s impossible to ever see the end.” Elizabeth Wurtzel, Prozac Nation.

Based on that, we can say that a depressed person is one that has no hope for a better future. Now, let’s take a look at the definition given by the National Institute of Mental Health (NIMH): Depression (major depressive disorder or clinical depression) is a common but serious mood disorder. It causes severe symptoms that affect how you feel, think, and handle daily activities, such as sleeping, eating, or working. To be diagnosed with depression, the symptoms must be present for at least two weeks. In other words, we can say that depression is a state of constant sadness during which a person is highly motivated to do nothing.

Now, lets shift to the most common causes of clinical depression. This disease can be triggered by a variety of things. In the following lines, I’m going to list some of its most popular causes:

Keep in mind that there are other situations that can trigger depression.

How can you tell if someone is struggling with this gloomy state of mind though? What are the symptoms? If you want to know if a loved one is suffering from a major depressive disorder, here are a few signs to pay attention to:

Most psychologists agree that the person should present at least five (5) of these symptoms in order to say that they are really suffering from depression.

Now, back to my original topic: Haitians and depression. How do most of us see this mental illness? I think it’s safe to say that most Haitians don’t really understand what it’s about. If you tell one of your compatriots you’re depressed, here are some of the answers you’re most likely going to hear:

Some Haitians don’t acknowledge how serious this illness really is. They seem to think that once you’re healthy, living in a decent house, eating well, and getting an education; those are the key ingredients to permanent Happiness. They don’t fully grasp that there are other circumstances can have a huge and negative impact on your humor and because of that, most of us think that depressed people are just being dramatic, ungrateful, unappreciative, and are sad due to another factor.

My story, a few years ago, I had to struggle with depression, and I’m going to tell you how bad it was. I double-majored in Linguistics and Psychology. I went to 2 different universities; one from 8 to 2, the other from 3 to 6:30. During my second year of Psychology, I was struggling with my third of Linguistics; I attended 25 classes per week: 10 for (Psychology) and 15 for (Linguistics).

The entire academic year was basically a living hell. I couldn’t sleep, had trouble eating, was always dispirited, and people around me thought I was overreacting. And as if this wasn’t horrible enough, in June, I had to undergo all my exams simultaneously, so I was preparing my finals for both studies all at once. It was exhausting! I lost weight and hair but still managed to score 85/100 for Psychology and 75/100 for Linguistics.

Want to know what my mom told me when she found out? “Ti kras nòt sa ou fè? Li pa ase! Ou te ka fè plis!” (That’s it ? Not enough, back to the drawing board, you could’ve done better!) Guys, these words came to me like a wrecking ball (in my Miley Cyrus voice). For the first time in my life, I cried because I was frustrated. I overexerted myself for 9 months, managed to remain a top student but still, to my mom, it was nothing. When I pointed out how challenging it was, she simply brushed it off as me being dramatic. Plus, my mom wasn’t the only one undermining my efforts; I had people commenting on my Facebook status with the same reflections.

They never faced a similar issue yet they “knew” what it felt like. That’s when I came to the realization that empathy is NOT something most Haitians know much about. A thesaurus would help us define this term but as a huge Eminem fan, I’ll just use his lyrics from the song Beautiful:

At that time, this was all I needed. I just wanted my mom to understand that I went through hell and back. It didn’t happen and it wasn’t the first time. Also, I feel like some Haitians have a tendency to minimize every other aspects of existence, as long as the mentality is “If we’re alive, then we’re good”.

Notice how we sometimes say “podjab” (“Sorry to hear that” – in a nonchalant tone)  Sometimes it’s feel like a slap in the face; that “podjab” feels like “Meh, it’s not a big deal”.

One of my closest friends suffered from depression as a teenager. A few days after her 18th birthday, she was diagnosed with cancer. At first, she couldn’t believe it and; didn’t want to accept it. She knew of no one who suffered from cancer; worse yet, a few days prior, she was out there partying. How could she be inflicted with such an ailment? It was hard to accept, but after a while, she overcame the battle.

Between the chemo and the day she found out she was cancer free, my friend went through the toughest period of her life. She lost her hair, weight, confidence, and at some point, she didn’t even want to have any contact with the outside world. Can we blame her? She was afflicted physically, and mentally, and although as her friends, we tried to understand, she knew we couldn’t fit in her shoes based on our limited perceptions and life experiences. Still, our support was mandatory; she found strength in us and a shoulder to rely on.

All this to tell you that although we can be apathetic at times, there are exceptions and a change is possible. We shouldn’t wait until someone is sick for us to try to comprehend them. We should be empathic towards anyone going through tough times. Whether it’s a heartbreak or the death of a parent, as long as someone is facing hardships, we should try to understand them.

The last thing a depressed person wants to hear is that they’re being dramatic and that they need to snap out of it. Unfortunately, most of the time, this is exactly what we tell them and that’s why people in our surroundings might be suffering silently.

No one wants to admit that they’re depressed, especially if they know they’ll be misunderstood. That’s why we must learn to show empathy towards those folks. Although we may never really feel the same, we can always relate and respect their situation. We need to be aware of how they feel in order to help them get through it; because they’re unable to do so on their own.

Notice that I said empathy, not pity. If I’m depressed, I want you to be conscious of my pain, not feel sorry for me.

P.S.: To all my depressed Haitians out there, I know it’s hard and frustrating to have your problems considered as if they were nothing, and I hope that someday, just like I did, you’ll win the fight against depression. 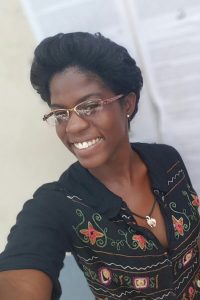 Sally Riché is a young Haitian blogger, poet, linguist, English teacher and Psychology student. Born and raised in Haiti, the soon to be social Psychologist writes articles in which she addresses some issues in the Haitian society.

To do so, the writer uses her own experiences and those of people in her surroundings. Living in Haiti, her findings are based off testimonies given by people sharing her situation. Ms. Riché wants to do qualitative research therefore she won’t be using numbers as data for analysis.

If support from family and friends and positive lifestyle changes aren’t enough, find a therapist who can help you heal.

Therapy can help you understand your depression and motivate you to take the action necessary to prevent it from coming back.

Medication may be imperative if you’re feeling suicidal or violent. But while it can help relieve symptoms of depression in some people, it isn’t a cure and is not usually a long-term solution. It also comes with side effects and other drawbacks so it’s important to learn all the facts to make an informed decision.

Georgia Haitian-American Chamber of Commerce Launch “BEL Haiti Initiative”
‘Hair To The Queen!’ The Uplifting Journey Of A Haitian Cancer Survivor And Her Daughter