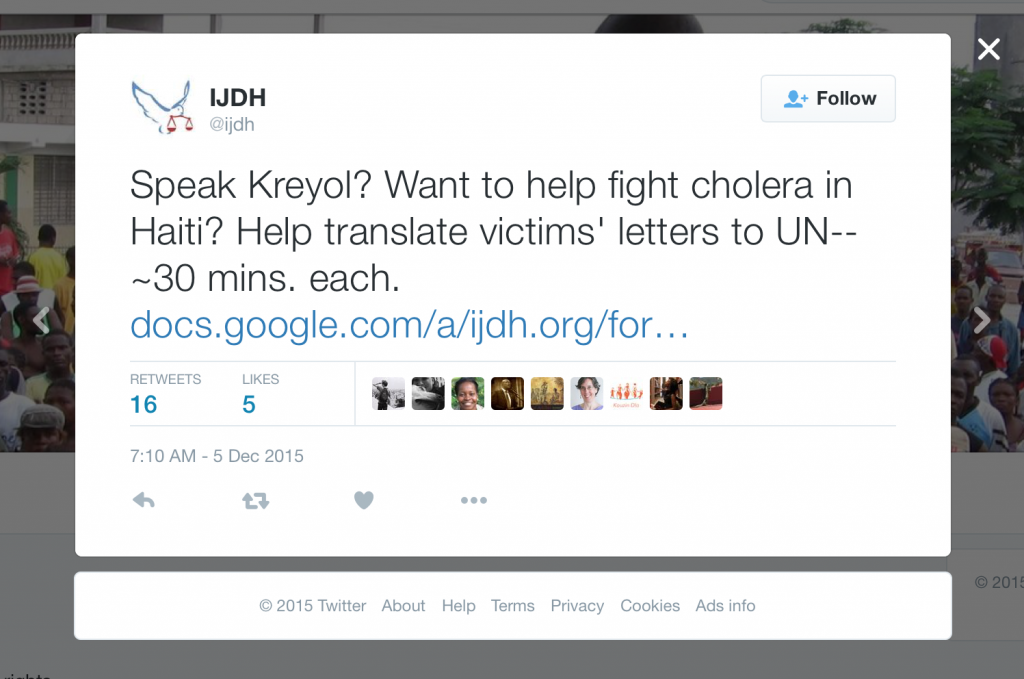 Speak Kreyol and want to help cholera victims get their message to the  United Nations?

The Institute for Justice & Democracy in Haiti are seeking help from Kreyòl speakers who can translate cholera victims’ letters to English for the UN by going to  this link and signing up.

The organization needs your help translating 2000 personal handwritten letters from victims to the UN appealing for the UN to live up to its own human rights obligations and provide justice and reparations to people who suffered from the diseases.

The letter-writing campaign was organized through the BAI’s Civic Engagement Project, which brings together about 15,000 people in rural Haiti, many of whom have lost family members to cholera or are survivors themselves.  They meet weekly in small groups to receive training on human rights advocacy, including their rights in regard to the cholera epidemic introduced by the UN.

Cholera cases continue to surge in Haiti five years since the disease was introduced. In the first half of 2015, the infection rate tripled over the same period last year.  9,000 people have died, and over 754,000 people have sought hospital care in the last five years. Clean water and sanitation are needed to end the deadly epidemic, but funding remains inadequate.

Victims have been seeking justice from the UN for many years. In 2011, 5,000 victims filed claims through the UN’s claims process, which promises to compensate victims of personal injury or death caused by peacekeepers.  The UN summarily rejected the claims as “not receivable” in 2013, without providing justification.  The UN has also claimed immunity from suit in several lawsuits filed in federal court in the United States.  An appeal is currently pending before the Second Circuit in New York.

“For five years, the UN has ignored victims’ calls for a just response.  This is an affront to our dignity as a people,” the communities wrote.

The letters, along with a selection of translations in English, can be viewed on www.ijdh.org.

Click here  and here to learn more about the organization.