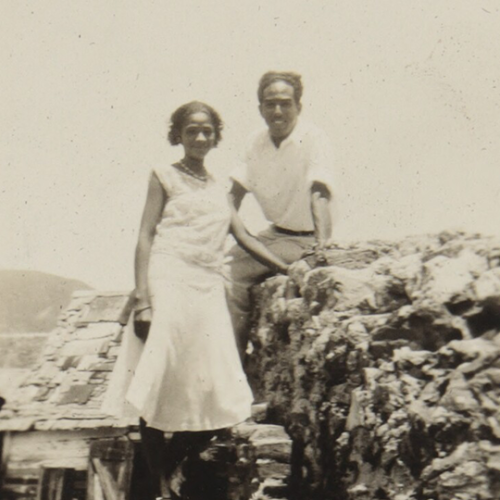 In 1931, American poet Langston Hughes was on his way to Haiti from Cuba. While he possessed formal letters of introduction given to him by people such as James Weldon Johnson, who had himself visited the Caribbean island a bit more than a decade before in hopes of conducting an investigation for the NAACP, Hughes chose to enjoy his time in Haiti by avoiding most of the “polite élite” (Renda 2001, 261). Similarly to most Americans of his day, Hughes viewed Haiti as this exotic location few miles away from Miami and sought out adventures. He was particularly interested in the infamous “Vodou dances” that many American Marines had popularize with autobiographies relating to their experiences in Haiti (Renda 2001, 262). – Read more about Langston Hughes’ trip to Haiti on Haitian History Tumblr

Haiti, land of blue sea and green hills, white fishing boats on the sea, and the hidden huts of peasants in the tall mountains. People strong, midnight black. Proud women whose arms bear burdens, whose backs are very straight. Children naked as nature. Nights full of stars, throbbing with Congo drums. At the capital lovely ladies ambergold, mulatto politicians, warehouses full of champagne, banks full of money. A surge of black peasants who live on the land, and the foam of the cultured elite in Port-au-Prince who live on the peasants.

Langston Hughes, from Autobiography: I Wonder as I Wander (1956), reprinted in Foreign Policy (14 January 2010)

Image: Langston Hughes, Haiti Scrapbook (ca. 1931). Yale Collection of American Literature, Bienecke Rare Book and Manuscript Library. Note: click here and scroll down and click on  “Multi-image set/See all images in this set” to see the contents of the scrapbook. – source