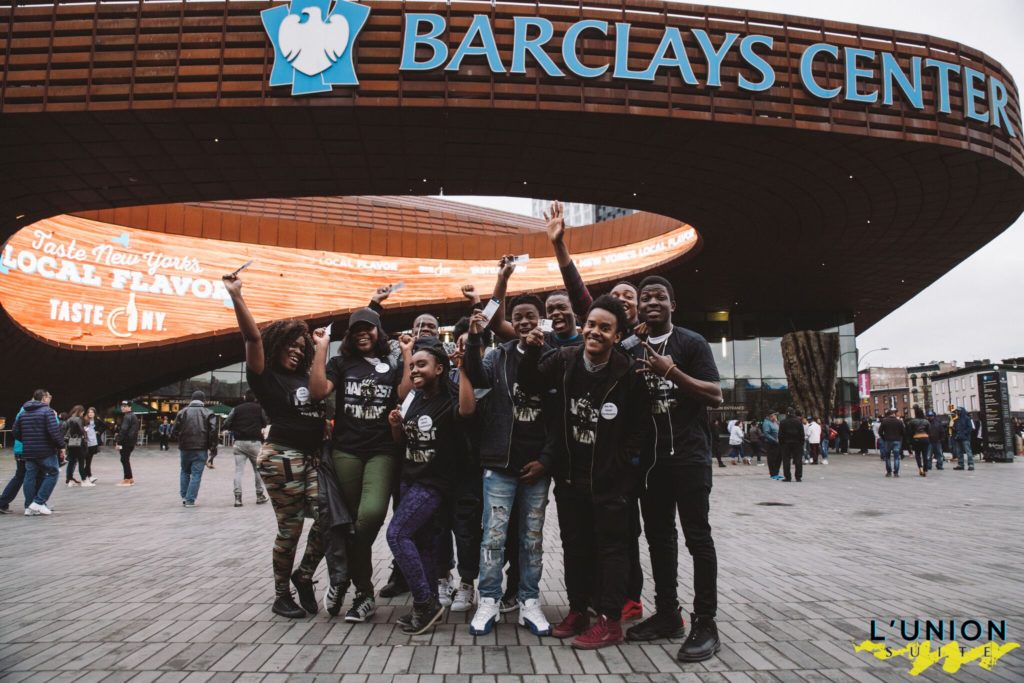 As Berto prepared for his Showtime Championship Boxing match, he understood the importance of paying it forward and was moved to treat a few Haitian kids from the local community to the fight and made it possible for these worthy teens to enjoy the opportunity of a lifetime, to watch a live event at Barclays featuring two Haitian-American athletes. Not only did they witness Berto’s fight, but they also got an added treat of watching Olympic Boxer Richardson Hitchins’ fight as well.

Ten superstar teens from the Flanbwayan Haitian Literacy Project were treated to a night at the fights by Berto, L’Union Suite and JBF Worldwide. Founded in 2005, the Flanbwayan Haitian Literacy Project is a youth membership based organization serving newcomer and young adult Haitian immigrant students in New York City who are English Language Learners between the ages of 14 to 21.

Accompanied by Case Manager Nancie Adolphe, the young men and women came to the Barclays Center from Brooklyn to see one of the largest sporting events of the year. Treated to tickets to the fight, food and transportation, these teens were able to meet Berto’s family and some of the JBF Worldwide representatives.

“I want to personally thank Jack Brewer and Andre for helping make this possible. Being able to see these kids eyes open wide when they walked into the arena was priceless. We never know how much a little effort goes a long way in changing someone’s life. Their perspective on the possibility of success was changed that night, it was definitely humbling,” explains L’Union Suite CEO, Wanda Tima-Gilles.

Independently L’Union Suite, JBF Worldwide and Berto have been committed to giving back to the community through a variety of efforts, but collectively on Saturday they proved that working together genuinely can make a world of difference.

Since launching in 2011, L’union Suite has attracted over 1 million visitors from all over the world with over 200,000 subscribers via the site, Facebook, Instagram, Tumblr, and Twitter. L’Union Suite’s ultimate goal is to inspire others and leave a legacy of hard work, dedication, and change within the community.

About The Jack Brewer Foundation: jbfworldwide.org

Jack Brewer, five-year National Football League (NFL) veteran and founder/CEO of The Brewer Group, Inc., established The Jack Brewer Foundation (JBF Worldwide) to empower women and children living in impoverished and underdeveloped communities by enabling food security; promoting access to education and cultural exchanges; assisting in medical aid and disaster relief; and building peace. JBF Worldwide uses sport as a catalyst to provide resources and opportunities to the world’s most underserved populations and actively works to “Empower From Within.” For more information about The Jack Brewer Foundation, please visit www.jbfworldwide.org or follow them on Facebook, Twitter, Instagram and Snapchat.

With laser quick hands and thundering power, Andre Berto is one of the biggest names in boxing. Known for his aggressive style and exciting fights, Berto continuously draws viewers every time he steps in the ring.  A former WBC and IBF welterweight world champion, Berto consistently provides some of the most crowd-pleasing fights in the sport and is known as one of boxing’ great action fighters. Outside the ring, Berto prides himself on his philanthropic efforts and is an advocate for relief efforts in his native Haiti. The 33-year-old created his own foundation, The Berto Dynasty Foundation, in February of 2010 and plans to be a long-term presence in Haiti to help rebuild the proud island nation. He travels to Haiti regularly with other charitable organizations and his family to provide inspiration and any assistance possible.

The Flanbwayan Haitian Literacy Project has assisted hundreds of Haitian newcomer youth in NYC public high schools since it was founded in 2005. We ensure Haitian newcomer youth 14-21 years old are appropriately placed in high schools that support their ability to remain in school and graduate. Our out of school time programs develop their capacity as productive citizens through youth and leadership development activities that build their self-esteem and nurture their voices.