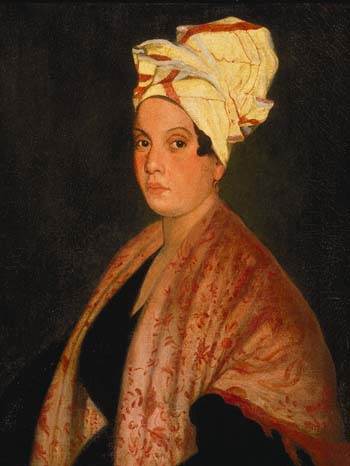 I’ve never really done any real research on Voodoo, and although I tell myself I don’t believe in it, I know it exist. I hardly ever post stories about Voodoo but I really found the story of Marie Laveau very interesting. I visited New Orleans last year and images of voodoo were very hard to ignore with so much emphasis being place on it throughout the city.

Voodoo is one of many things New Orleans is famous for. Many tourists travel from all over to New Orleans to experience this mysticism, to buy voodoo dolls and potions, and to hear strange stories of possessions and curses. One of the most enduring stories related to the New Orleans voodoo culture is that of Marie Laveau, New Orleans very own voodoo queen.

Though she has been dead for more than a century, Marie’s legend lives on. Until today, there are some who claim she still holds power over the city.

Not much is known about Marie Laveau. There are many so stories here and there about this mysterious woman that it’s hard to separate fact from fiction.

Was she really a master at her arts, and capable of summoning spirits to do her bidding? Could she use the mystic arts to solve the problems of those who came to her for advice? Did she have connections with judges and other elite members of society as some critics claim? Where was she born? Where was she buried? It’s hard to say for sure. To add to the confusion, many people mistake her daughter, Marie Laveau II for her! Her daughter was a well-known practitioner of voodoo too, but it was the mother who was considered the queen.

Some claim she was born in Saint Domingue which later became Haiti, and migrated to New Orleans. Some however, claim that she was born in New Orleans itself. Her official father, Charles Laveau was white and a carpenter while her mother, Darcantel Marguerite, was a former African slave. However, it is widely believed that she was an illegitimate child of mixed heritage, with some claiming that she descended from royalty! There’s almost nothing known about her early life before her marriage except that she was very close to her two sisters who were both named Marie.

Even her appearance is unknown; people have described her using various colors. Some say she was dark-skinned while others said she was white, and yet others claimed she was somewhere in-between. But everyone agreed one thing: she was beautiful, and like all young beautiful women, she found herself in the arms of a suitor.

His name was Jacques Paris, a man who came from Haiti. When Haiti gained its freedom from the French, many migrated to New Orleans which had a strong French and Spanish background. Their marriage took place on August 4, 1819. Their marriage though, would be cut short; her husband Jacques would disappear in just a few years.

No one knows what happened to him, and there are many conspiracies. One of these conspiracies claims he went back to Haiti. Officially, he was proclaimed dead, and Marie gained the title ‘Veuve Paris’ (Widow Paris). – Continue Reading On KreolMagazine

To read more on  Louisiana Creole Tradition Try this link.