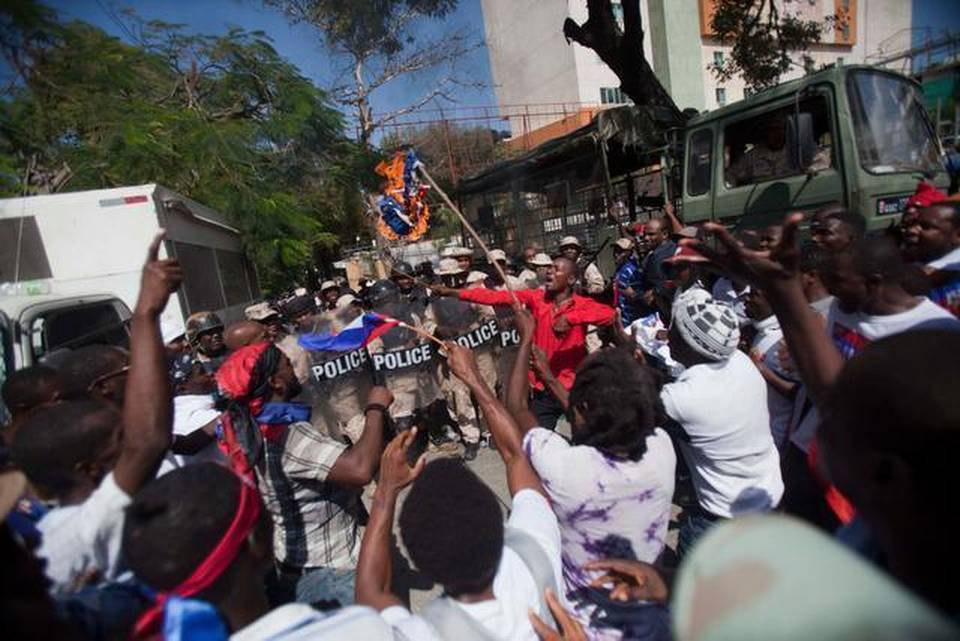 If you haven’t been following this story, Miami Herald website is a great site to keep up with the news. According to [Miami Herald] February 25th, 2015:

Two weeks after a Haitian man was lynched in the Dominican Republic, thousands marched through the streets of Port-au-Prince on Wednesday, demanding justice and denouncing rising anti-Haitian sentiment in the neighboring Spanish-speaking country.

“Despite our diversity, despite our differences, we are a country, we exist and we deserve respect,” said Roman Catholic Monsignor Pierre-André Dumas, who helped planned the march. “We are neighbors, sharing the same island. The question of racism and barbarism need to be finished with on this island.”

It was a rare display of unity that attracted a cross-section of Haitians, including professionals, former presidential candidates, musicians and everyday citizens. With flags draped around their shoulders, they walked alongside school children who sang the country’s national anthem, La Dessalinienne, as they made their way from the Champ de Mars to Haiti’s Foreign Ministry to finally, the Dominican Embassy in Petionville.

At the Foreign Ministry, workers in a silent display of solidarity displayed the Haitian flag and handed out miniature flags to marchers, including police officers, who waved them while escorting the protest.

“We strongly condemned this,’’ Dumas said. “A country’s flag is its symbol and needs to be respected. We cannot answer one act of barbarism with another.”

The burning of the Haitian flag occurred just days after a Haitian immigrant was found hanging from a tree, his feet and hands bound, in Santiago’s Ercilla Pepin Park. The man, nicknamed “Tulile,” has been identified by Haitian officials as Henry Claude Jean.

The Dominican authorities have told local reporters that Jean was lynched by fellow Haitians over a winning lottery ticket; his family disputes that claim.

It was the second time in four years that Haitians took to the streets to denounce perceived racism in a neighboring country. But unlike in 2011 when Haitians marched to decry Jamaica’s treatment of Haiti’s Under-17 soccer players amid a cholera outbreak, this show of solidarity comes amid heightened tensions between Haiti and the Dominican Republic, and rising concerns about the mistreatment of Haitian migrants in the Bahamas.

Coincidentally, the Bahamas will host a meeting of Caribbean Community (Caricom) leaders on Thursday and Friday where the issues are expected to be discussed. But President Michel Martelly will not be there. He has canceled his appearance to stay in Haiti to address the rising tensions with the Dominican Republic, Foreign Minister Duly Brutus said.

Last week, Brutus acknowledged there was a rise in “anti-Haitianism” in the Dominican Republic, which shares the island of Hispaniola with Haiti. Speaking at a news conference in Port-au-Prince, he was joined by Haiti’s ambassador to the Dominican Republic, Fritz Cinéas. Cinéas’ residence in Santo Domingo had recently been burglarized. Cinéas resigned Wednesday, the government said.

In a letter to Dominican Foreign Minister Andrés García Navarro, Brutus condemned the Haitian flag burning, and called on Dominican authorities “to respect the fundamental rights of every Haitian in the Dominican Republic.”

“We think it is extremely important for the Dominican government to make its voice heard on all these acts committed against Haitians in the Dominican Republic,” Brutus wrote.

A similar message was delivered Wednesday to Dominican Ambassador Ruben Silié Valdez by march organizer Rosny Desroches. Desroches delivered to the embassy a declaration signed by dozens of organizations.

“Our message is clear and it is to all of the Caribbean countries and all of our neighbors,” said Desroches, a leading member of Haitian civil society. “Haitians’ human rights need to be respected. Haitians have a right to dignity; a right to life; and a right to respect regardless of our economic situation. When you look at the role Haiti played in the fight for freedom, the fight against colonialism, Haitians are owed that respect.”

“We hope that this march will encourage and embolden the Haitian government to keep human rights concerns — including the denationalization of hundreds of thousands of Dominican citizens of Haitian descent — at the forefront of their bilateral relations with the Dominican Republic,” McMullen said.

Tens of thousands of Dominican citizens of Haitian descent, and Haitian migrants, are at risk of deportation come June. This is when Dominican authorities have said they will resume deportations for anyone who failed to legalize their status. – Continue Reading Here