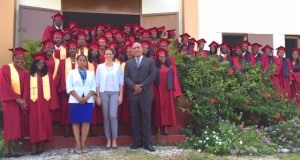 Congratulations to all the graduates.

On Sunday the Minister of Tourism Stephanie Villedrouin attended the first graduation for the Hotel & Tourism management in Les Cayes, Haiti.

Seventy one young people from the l’Institut De Formation Hôtelière et Touristique des Cayes (Institute of Hotel and Tourist Training Cayes) (IFORHT South), the first Hotel School and Tourism State outside Port-au-Prince, received their scrolls after two years of training in the tourist reception at a ceremony held Sunday, March 15, at the local Department Directorate of Tourism South.

“The South, once again, expressed its enormous potential to be a large pool of Tourism in the Country. I am delighted after starting with the President of the Republic HE Mr. Michel Joseph Martelly, to see this first promotion of the School completed the curriculum, “said Stéphanie Balmir Villedrouin, Minister of Tourism and Industries Creative.

In addition, Ms. Villedrouin praised the dynamism of its departmental Director of the South, Karine Conde, who has combined efforts to realize this project in the city of Les Cayes for the entire South Coast region. 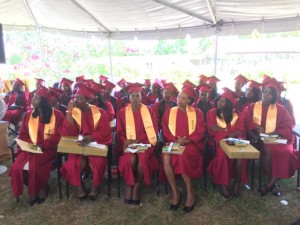 For his part, the outgoing President of the Tourism Association of Haiti (ATH), Patron of this first batch of students trained by IFORHT South has emphasized the importance of training in the industry tourism. “I welcome you in the great world of dear young tourism. “M.Buteau supported.

Journalist-Entrepreneur and owner of the hotel Mr. Valery Numa, also praised the initiative to train young Southern Hospitality and Tourism in the South. Mr. Numa praised the professionalism shown by these young graduates of the IFORHT during their internships at his hotel.

Note that the Training Institute of Hotel and Tourist Cayes works in two shifts (morning and evening), with a curriculum offering general courses on tourism. By the end of the academic year 2015-2016, the South IFORHT provide students specializations in kitchen pastry and bakery. By April 2015, foreign language courses will be added to the curriculum of the Institute.

The creation in 2013 of the South IFORHT to decentralize the hotel and tourism training is a vibrant testimony.