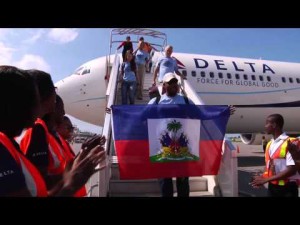 Wow, well that was quick. According to some of the comments I’ve read from Haitian travels, people felt the tickets were priced too high, and the flights included connections which were too long.

Although Delta remains committed to Haiti, due to a decreased demand, we’ve decided to reduce the number of flights going to Port-au-Prince, a Delta spokesman said.

New York travelers can connect to PAP via Atlanta, which has daily service to Haiti.

With the arrival of Jetblue, their cancellation doesn’t affect me much, Todd Toussaint, who travels between Haiti and New York frequently, said.

With Jetblue, you arrive in Haiti much earlier in the day compared to Delta. I think that may have been a determining factor when people were choosing which airline to fly with. – Continue Reading Here