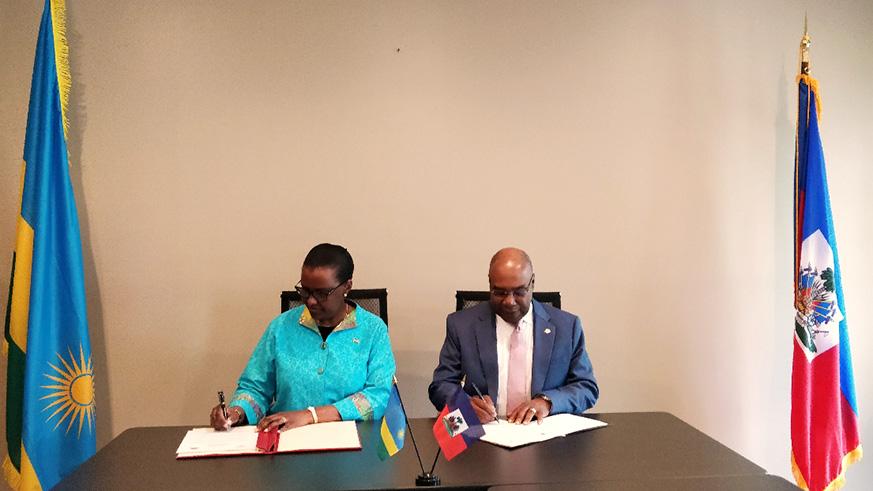 Rwanda has established diplomatic relations with Haiti as the two nations move to widen existing as well as explore new areas of cooperation.

Rwanda’s Permanent Representative to the United Nations, Ambassador Valentine Rugwabiza and her Haitian counterpart, Ambassador Denis Régis, said in a joint statement that a Haiti-Rwanda Bilateral Commission was established in 2010 to facilitate bilateral relations.

The two countries have had significant exchanges in the past, according to the statement.

“A number of Haitian students have pursued their undergraduate studies at the National University of Rwanda on full scholarships provided by the Government of Rwanda within the framework of the Commission,” the statement reads in part.

Rwanda’s Police Peacekeepers in Haiti have been celebrated for their exemplary service over the years, contributing to national reconstruction efforts after Haiti’s successive natural disasters.

Haiti is a Caribbean nation with almost similar size and population to that of Rwanda. It is a third largest country in the Caribbean behind Cuba and Dominican Republic.

Haiti has a remarkable history of emancipation from a racial and colonial rule, gaining its independence in 1804 and making it the first black republic.

On the economic front, despite successive natural disasters that devastated the country, Haiti is experiencing a resurgence of its economy with major investments in manufacturing, agribusiness, and tourism.