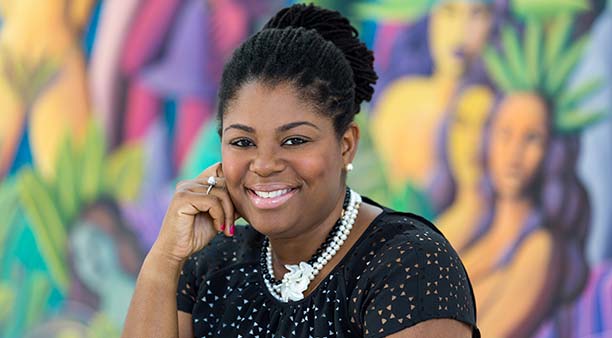 On Monday Haitian-American Sandy Dorsainvil who ran the center for several years was fired  without explanation.

If you’ve attended an event at the little Haiti cultural center the last few years, there’s a strong possibility you know or made contact with Sandy Dorsainvil, so when I saw the headline, I was completely shocked to hear she had been fired. I can definitely attest that Sandy worked tirelessly and selflessly to make the LHCC a place where Haitian can count on cultural events which cater to the Haitian community. She managed the center for several years, overseeing a theater, fine art gallery, archive and recently renovated Caribbean marketplace.

The manager of Miami’s Little Haiti Cultural Center was abruptly fired Monday without explanation, causing an uproar among blind-sided supporters.

Sandy Dorsainvil said she was at the city facility at 212 NE 59th Terr. around 2 p.m. when two city employees showed up with a termination letter signed by City Manager Daniel Alfonso. She said the letter didn’t explain why she was being fired, and she was given a few minutes to clear out her possessions from her office and leave

“I don’t even really know what happened,” she said in an interview. “I just feel maybe I wasn’t moving the complex in the direction that the Department of Real Estate and Asset Management wanted,” she said. “There’s been lots of conversation about changing direction and making the cultural center change as Little Haiti is changing. Making it less a community-oriented venue and more of a rental facility that can generate revenue.”

In a statement, Alfonso said he couldn’t discuss Dorsainvil’s firing due to an “ongoing review.” He declined to elaborate when reached by phone.  Alfonso said his administration will tap a property manager to run the center while they search for a permanent replacement. But he isn’t discussing why she was fired.

Alfonso followed up with “We thank Ms. Dorsainvil for her years of service to the City of Miami and wish her well in her future endeavors,” Alfonso said in his statement. “We are currently looking for a new director for the Little Haiti Cultural Center.”

Some in Little Haiti want her reinstated and on Wednesday Joann Milord, executive director of the Northeast Second Avenue Partnership, a community organization dedicated to revitalizing Little Haiti’s commercial corridors held a community meeting to talk about Dorsainvil’s firing.

“We as a community want answers as to why this was done,” she said. “She did a great job and her performance shows she shouldn’t be terminated.”

I completely agree with Joann and will stand behind her and Sandy and sign whatever petition is needed to, at least, get answers for Sandy. Thank you, Sandy, for all your hard work and dedication at the center.