In 2016, my close friend Lawrence (aka the Neighborhood Finance Guy) invited me to join him at his employer’s conference in Philly, Um… I didn’t care for the conference, – but FREE accommodations. Meh… Why not?

So, I booked two one-way tickets and headed to D.C. After exploring the city for a bit, we sat down and talked about finances. He’s a govt. auditor, so I guessed he cared about this stuff. He posed the question “What’s your net worth? I knew the “ballpark” estimate of my net worth, after stumbling on the Mint.com app for the last few years. I was reluctant to tell him, so I replied: “It’s ALL negative!” LOL.

That night after dinner, I soon began to think why I felt so compelled telling my friend about my net worth, the heaviness feeling of guilt and shame ache my chest. I wonder did others share the same sentiments?

In 2017, I got serious and immersed myself in everything personal finance from books, social media, and podcasts. My favorites are Paychecks and Balances and TheMoneyGuy Show. I also watched hours of The Financial Diet on YouTube by creator Chelsea Fagan.

I began applying what I was learning. Growing up Haitian, we never talked about money. My mom work to put meal on the table and we never wondered how. I was determined to change.

At the time, I was living in Boynton Beach, FL in a beautiful 910 sq. ft 2/1 apartment. My base rent was $1,080 a month. Many might agree that’s not a lot of money for a 2/1 apartment. But, factor in other monthly expenses such as student loan repayment, water, gas, internet, insurance, phone bill, food, an electric bill, personal savings etc. I was well over $2,000 per month on a $41,000 salary.

“I was BARELY making it each month.”

Yet, my pictures on Instagram posts didn’t reflect my bank account. I was “faking normal” for sure.

I was determined to find an apartment under $1,000. It was a difficult task in South Florida (unless you want to throw away your life). Under God’s grace and tons of hours stalking the internet, I found a great unit in West Palm Beach. Through a sublease, I was grandfathered at a lower rental price of $910 a month! Yep, you read correctly.

After some calculations and mental focus on getting my life together. I slowly eliminated my credit card debt and personal loans. I began contributing more money to my retirement accounts.

In mid-2016, I started contributing $120 a month in a ROTH IRA. Unfortunately, ROTH IRA has no current tax-advantages, but compounding interest was my long-term best friend. You can also withdraw it for things like a down payment for a house etc. So, meh…why not?! More options the better.

After taking a hard look at my employer’s 401k, I began by contributing 3% to meet the employer’s match. I wasn’t about to leave any FREE money on the table. I eventually increased to 7%. By 2019, I started to contribute 20%.

Trust me… it hurt at the time, like seriously screwing up my eyebrows hurts. But, I gradually got used to the saving contribution rate. Now, it’s an after-thought.

I also grabbed an HSA (Health Savings Account) in 2016. At the time, I was only contributing $20 a month.

After some research, I’ve learned that contributing to an HSA has major tax-advantages. I gradually increased my contribution to $150 per paycheck. I took advantage of my employer’s health incentives whereas they will give you a max of $500 towards your HSA for getting a physical and tracking your fitness activities. My fledgling HSA grew from $200 to over $5,000. This also opened up a secondary option of investing some of my HSA funds in mutual funds. I quickly shifted to $2,300.

Making my money work for me

Aside from lowering my housing cost, I also switched cellphone carriers. My iPhone is paid in full. My base rent has increased from $910 to $1,004, but it includes cable and internet. In 2018, I received a $7k bonus and a 20% salary raise. I learned no to splurge on securing the bag or bags. The additional revenue helped me to contribute even more towards my Traditional and ROTH IRAs. What started at $1,300 is now up to $5,200.

I don’t make six-figure income nor am I a FIRE (Financial Investment, Retire Early) candidate but I’ve realized there’s a DEEP, dire financial problem in our society. I became PROACTIVE with my finances rather than blaming everyone else for my mistakes. It wasn’t helping me and changing my strategy did. All the sacrifices that my mom made as a migrant worker, will pay off.

I hope this candid post helps others realize money management doesn’t take much expertise rather it takes the will power to just get your shit together. Because if you don’t get serious about your life & money now, you will eventually pay for the consequences later. 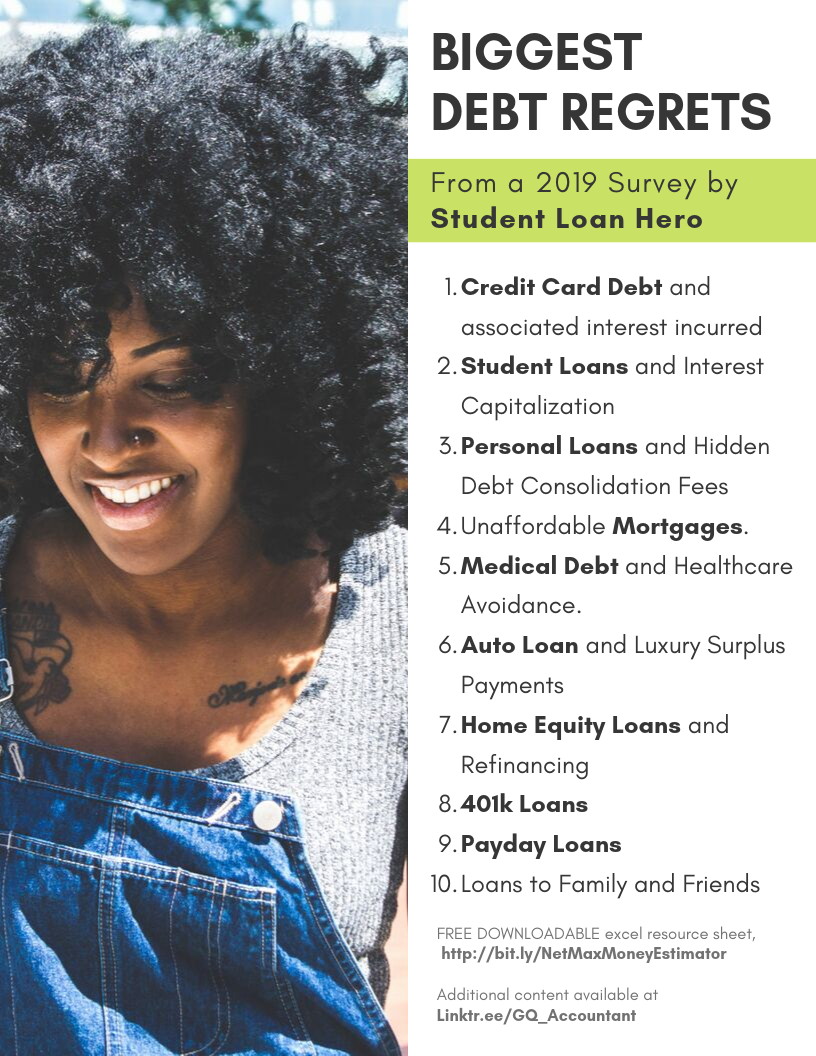 and http://bit.ly/NetMaxMoneyEstimator to help you with money management.