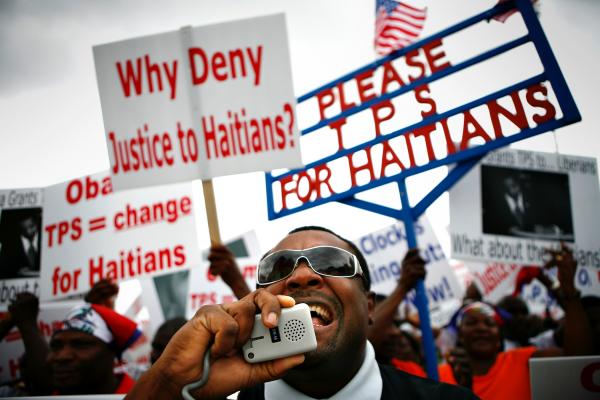 The last few weeks many people have emailed and message me asking do I have any updates on whether or not Temporary Protected Status will be renewed this year.

According to online reports, U.S. Citizenship and Immigration Services (CIS) is recommending that temporary protection for 50,000 Haitians who came to the U.S. after the 2010 earthquake be dropped, clearing the way for possible deportation.

Temporary Protected Status, called TPS, was afforded to Haitians who fled to the U.S. following the earthquake, so that they could reside and work legally here while their country recovered. The status was only for 18 months, but has been extended several times. It has now been more than seven years since the earthquake. The current TPS is due to expire on July 22.

James McCament, acting director of U.S. Citizenship and Immigration Services, concluded in a letter last week that conditions in Haiti have improved enough to end “temporary protected status” for Haitians, according to a copy of the letter obtained by USA TODAY… McCament proposed an extension to January 2018 to allow for a “period of orderly transition” but said the program should not be extended beyond then…

McCament said Haiti has not completely recovered from the earthquake, but enough progress has been made. He said the Obama administration started sending some Haitians home in 2016…

The Trump administration is recommending sending tens of thousands of Haitians back to their homeland because it believes conditions have significantly improved in the disaster-prone, poverty-stricken nation.

But the move comes as more than 40,000 Haitians continue to call makeshift shelters and tents homes — seven years after Haiti’s devastating Jan. 12, 2010, earthquake — and as severe hunger and housing crises plague the country’s southern region six months after a deadly Hurricane Matthew wiped out roads, home and farmland.

“If they send everyone back to Haiti, they might as well be sending us to die,” said Cadeus Chaleus, 70, who after 16 years of living as an undocumented immigrant in Miami has spent the past seven years living without fear of deportation. “Despite what they say, things have not improved at home.”

“Conditions in Haiti no longer support its designation for TPS,” McCament said in a memo to U.S. Department of Homeland Secretary John F. Kelly obtained by the Miami Herald.

McCament’s recommendations came as a surprise to many, including Haitian and immigration advocates who have been pushing for the extension of TPS before July 22, when it is up for renewal.

Last month, 10 members of the South Florida congressional delegation wrote to Kelly urging for renewal, and Miami Archbishop Thomas Wenski asked Miami Republican Rep. Carlos Curbelo to include language on TPS in a bill he refiled that would allow individuals brought illegally as children to remain in the country. McCament is recommending renewal, but only for an additional six months so that there could be “a period of orderly transition.”

“This is very, very distressing to the community,” said Marleine Bastien, executive director of FANM (Haitian Women of Miami). “We’ve been fielding calls all day from families with children in school, college students, people with businesses.”

On Friday, Bastien and others concluded that Haiti is ill prepared to handle 58,000 returnees — the number of Haitians currently enrolled in TPS.

Activists are planning to appeal directly to members of Congress, Kelly and President Donald Trump, who told Haitian voters during a Miami campaign stop last year: “I want to be your greatest champion.” –
Read Full Story on Miami Herald Here..….
Facebook Comments