The Sanford community is rallying behind a beloved resident who has been stuck in Haiti since December because of immigration issues. Henry Dorvil, 24, is known as the hardest-working man in Sanford.

He was born in Haiti and moved to the United States with his family when he was 5 months old. He said everyone in his family lives in the country legally, except him. He left the U.S. in December with hopes of one day returning as a permanent resident.

“Everybody said, ‘Don’t go, you’re not going to come back,’ but I was like, ‘There’s no point in me being an immigrant.’ All these rules changing, we’re going through a new presidency right now. So I said, ‘You know what, I’m going back,'” Dorvil said.

Click here to watch full video of his campaign. 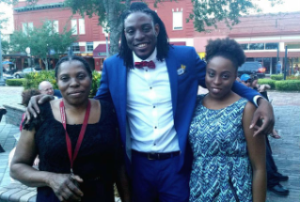 Problems with paperwork have kept Dorvil in Haiti for the past four months. Dorvil’s parents never filed the correct paperwork for him to become a legal resident.

“I was told that for me to get my permanent residency I would have to go back to my country and re-enter legally since I entered illegally as a child,” said Dorvil.

Dorvil tried to sort out the error while still remaining in the U.S. but to no avail. He then headed to Haiti. Four months later, Dorvil says immigration officials told him it could take several more months before his case will even be looked at.

“They say they are nine months behind,” said Dorvil.

“Due to Hurricane Matthew and the system in general, they’re really backlogged and it’s going to be quite a while before his case is even looked at,” Help Henry campaign organizer Christina Hollerbach said.

While he’s waiting, he’s attempting to adjust to life in Haiti. His home has no running water or electricity.

Dorvil is trying to get his case expedited. He said he needs to get home to help take care of his disabled mother.