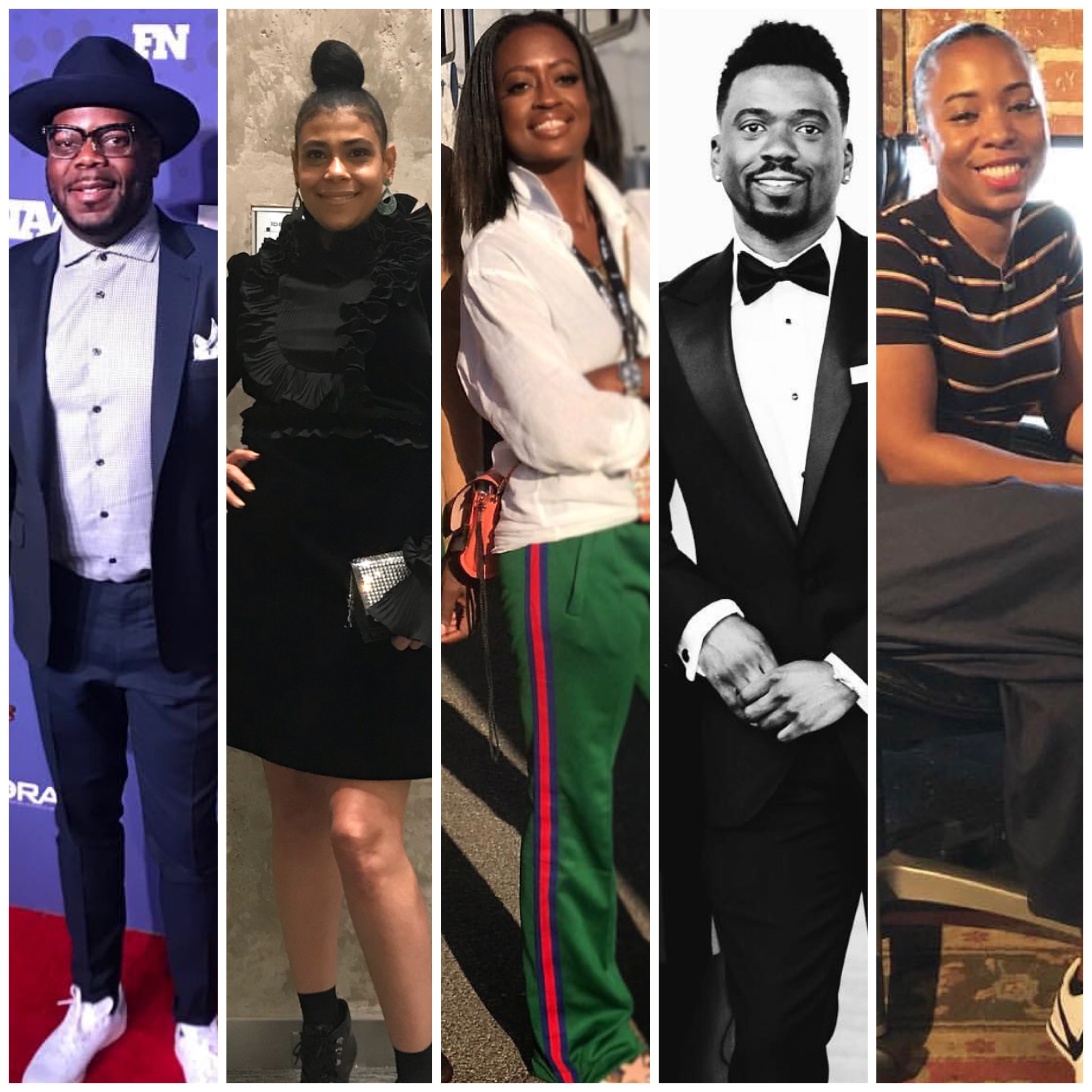 It’s no surprise some of the top companies in the world are being run by Haitian-Americans. The last year we followed the career, social media and have met and work with some of these top execs who are leaders in their fields. Here are ten accomplished Haitian-Americans who have all climbed up the ladder and made their mark.

Duperrier is an experienced Sports Marketer with a demonstrated history of working in the sporting goods industry. Duperrier is a strong marketing professional skilled in Event Planning, Sports Management, Marketing Strategy, Athletics, and Event Management. He was the interactive marketing manager at dime magazine and has been featured on nice kicks for his top 5  and also featured on BET as one of their top 25 influencers.

Duperrier works with several of Adidas biggest endorsers, like James Harden, Damian Lillard, Andrew Wiggins and many others, to make sure they’re taken care of, both on and off the court. He’s also had a chance to have his share of commercial cameos too. Part of his job is to work with the design and marketing teams to educate on what Adidas has to offer on and off the court, as well as how they can help them with marketing, tours and other events.

A graduate of the Fashion Institute of Technology and holds a bachelor of science in marketing and international trade. She one of the most influential and valued professionals in entertainment, music, and fashion. Currently serves as the chief operating officer of LL COOL J Inc.  In this position she is directly responsible for managing the Award-winning entertainment icon’s day-to-day operations, building his extensive brand and conceptualizing innovative ways to promote his various projects in the worlds of music, acting, writing, entrepreneurship, and philanthropy.

Prior to joining LL COOL J Inc., Joseph worked her way through the ranks of Violator Management/Records. She began as an executive assistant to CEO Chris Lighty in 1999 and was promoted to junior manager, manager, and vice president. Joseph’s involvement in fashion started when she was a production manager for “Wu-Wear,” the clothing line for the Grammy Award-nominated group The Wu-Tang Clan.  Joseph then continued her journey within the fashion industry as a wardrobe stylist for The Fugees.

Manager to Desiigner, Pusha T, Tyga and The-Dream, and COO of Kanye West’s G.O.O.D. Music, Steven Victor is the senior vice president of A&R at Universal Music Group(UMG).Victor, a graduate of Morehouse College, began his music career in 2003, working for six years in public relations at Interscope-Geffen-A&M, handling artists such as Jadakiss and Nelly Furtado.

He also worked closely with hip-hop duo Clipse, which included Pusha-T, who is now president of G.O.O.D. Music, before rising to the chief operating officer at Kanye West’s G.O.O.D Music. During his time at UMG, Victor signed and developed Def Jam artist Desiigner, he signed Desiigner to G.O.O.D. and helped his platinum hit “Panda” become the most on-demand streamed song so with over 674.4 million streams.  The track reached No. 1 on Billboard’s Hot 100 in 2016.

A graduate from Spelman with a political science and government degree, Melissa Victor is the Vice President at Sony Music Entertainment. She works with artists and executives of Island Records, Def Jam Recordings and Mercury Records on television, Internet and print media exposure. She joined IDJ in 2009 as senior director of media and artist relations.

Prior to that, she spent four years at Virgin Records, where she worked with Lenny Kravitz, Joss Stone, Big Boi and Janet Jackson, and more than two years at Arista and J Records. Victor got her start at Interscope Records in 2001. Melissa is also the sister of Steven Victor above.

You know her as one of the team members in Cardi B’s management crew, making history and representing her peoples but Marsha St. Hubert has been making a lot more than bloody moves. Hubert is the senior vice president of urban marketing for Atlantic record. She got her start in the business in 2002 as an intern for Lyor Cohen at IDJ. When Cohen left IDJ for WMG in 2004, he asked St. Hubert to join him. Shortly after moving to WMG, St. Hubert went to work for Atlantic Co-Chairman & CEO Craig Kallman, first as his assistant and then as A&R Operations Manager.

In 2007, St. Hubert moved to Atlantic’s marketing department as a Product Manager, spearheading breakthrough projects by artists such as Wiz Khalifa, DJ Drama, and Lupe Fiasco. In 2012, she left the company for a two-year stint at Epic Records. St. Hubert returned to Atlantic in 2014, reuniting with Wiz Khalifa and other artists, while working on new campaigns for Gucci Mane, Missy Elliott, Kodak Black, and PNB Rock, among others. In November 2017, she was featured on Forbes as one of the “4 Music Industry Veterans Responsible For Hip-Hop’s Popularity.

As one of the Group Sales Account Manager for the Brooklyn Nets and Barclays, Fragr works with local companies, schools, organizations and individuals in hosting events, theme nights, and fundraisers to Nets and Arena events.

Frage started as a Nets intern in 2012 and has been with the Nets organization for 2 1/2 years.  He is also the Mastermind behind the Brooklyn Elite NYFW Launch Party which is a custom networking social event which will leverage a platform of opportunities within the fashion, beauty and entertainment industries by producing relevant and relatable content for attendees — ultimately growing brand exposure and building a network amongst the key audience.

Before joining Rostrum, Plantin was director of writer-publisher relations at BMI. During her tenure there, she signed Jhené Aiko, ScHoolboy Q, Odd Future, Dreezy and Joey Bada$$. Plantin began her music career with The Neptunes’ Star Trak label, whose roster included Clipse, Kelis, and N.E.R.D. Plantin has spent nearly three years at Rostrum as Senior Director, Management, and A&R. She steps up after recently A&Ring Vali’s current single ‘Aint No Friend of Mine,’ and Mod Sun’s album Movie, which debuted at #3 on iTunes Hip-Hop Chart.

Her most recent signing is Atlanta rapper Caleb Brown, who will release his debut album All Dawgs Go to Heaven 2 via Rostrum and his own label Do L.I.F.E. Records. Previously, Plantin was Director, Writer-Publisher Relations at BMI in Los Angeles

You may know him as  Bryson Tiller’s manager but when he is not busy managing he is behind the scenes making magic happen at Revolt TV as their Director of Music and Talent. The beginning of his entertainment career began with an internship for Jermaine Dupri – now as Director of Music and Talent for REVOLT TV, he continues to prove his mark on the music culture. Dominique, once an assistant to Sean “P. Diddy” Combs, worked his way to being an A&R at Bad Boy records allowing him to manage the career of Multi-grammy Award Winner James Fauntleroy.

A former hip-hop journalist who took on the head of the artist curation role just this week has been with Apple since the company’s 2014 acquisition of Beats, serving as the head of hip-hop/R&B programming for iTunes and Apple Music. Chery serves as Head of Hip-Hop/R&B Programming at Beats Music, LLC. Mr. Chery got his start in music journalism with SOHH.com in 2003. He gained notoriety in the industry for his daily coverage of the Murder Inc. money laundering trial in 2005 and worked his way up to senior correspondent during the last two of his four years at SOHH. He served as a contributing editor for Scratch Magazine.

In addition to writing, he became the first hip-hop journalist to conduct on-camera interviews for an online entertainment news site during SOHH.com’s coverage of the MTV Video Music Awards in 2006. Later that year, he took his career to BET and later became executive music editor, where he had a hand in shaping strategies to promote BET’s tent-pole events-BET Awards, BET Hip-Hop Awards, BET Honors, Spring Bling-for BET.com’s microsites. He served as XXL Magazine’s digital content director. He also played a key role in selecting emerging artists-before they reached mainstream success-for the annual XXL Freshman 10 cover. XXL Freshman 10 alumni include Macklemore, Kendrick Lamar, Kid Cudi, Big Sean, J. Cole, Wale and more. In 2010, Mr. Chery won an award for Best Music Writing for his contribution to an article celebrating the making of Nas’ Illmatic in XXL Magazine.

Mona Scott-Young is a media mogul, television producer, executive producer, and entrepreneur. She is the CEO of the multi-media entertainment company Monami Entertainment, best known for producing the VH1 reality television franchise Love & Hip Hop. While working at Radio City Music Hall, she was approached by the Brooklyn group TrackMasters to come on board as their manager.Through them, she met music executive Chris Lighty and with him co-founded the management company Violator.

Over the course of twenty years, the company helped launch and revamp the careers of artists such as Busta Rhymes, LL Cool J, Q-Tip, Foxy Brown, Ja Rule, Mobb Deep, 50 Cent, Mariah Carey, Fantasia and Missy Elliott, who she still manages today. She transitioned into television in 2005, producing The Road to Stardom with Missy Elliott on UPN and creating her own television production company, Monami Entertainment. In 2006, Jim Ackerman, a director at VH1 at the time, approached her to help develop a reality television series centered on rapper Jim Jones. The series, now known as Love & Hip Hop, went on to become a huge success, spawning a media franchise that included the spin-offs Love & Hip Hop: Atlanta, Love & Hip Hop: Hollywood, Chrissy & Mr. Jones, K. Michelle: My Life, Stevie J & Joseline: Go Hollywood and Leave It To Stevie.