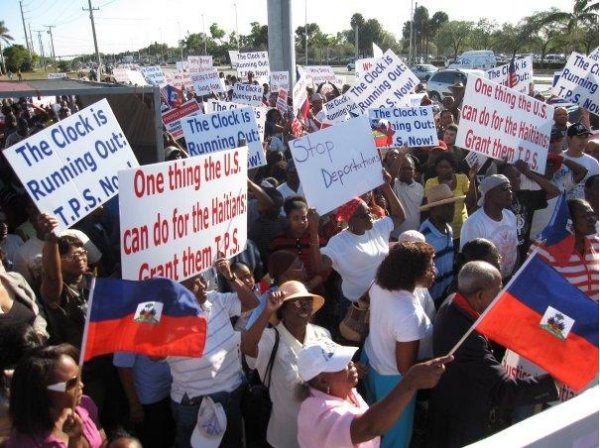 The Trump administration is taking the unusual step of hunting for evidence of crimes committed by Haitian immigrants as it decides their future in the United States.

According to The Associated Press, internal emails it obtained shows that the U.S. Citizenship and Immigration Services has made inquiries into the Haitian community’s criminal history.

The emails also reveal that the agency wants to know how many of the 58,000 Haitians enrolled in the Temporary Protected Status program is taking advantage of public benefits, which they are not eligible to receive.

“I do want to alert you … the secretary is going to be sending a request to us to be more responsive,” Kathy Nuebel Kovarik, the USCIS head of policy and strategy, wrote on April 27, according to the news service.

“I know some of it is not captured, but we’ll have to figure out a way to squeeze more data out of our systems.” “Please dig for any stories (successful or otherwise) that would show how things are in Haiti – i.e. rebuilding stories, work of nonprofits, how the U.S. is helping certain industries,” Kovarik wrote on April 28.

“We should also find any reports of criminal activity by any individual with “Temporary Protect Status.” Even though it’s only a snapshot and not representative of the entire situation, we need more than ‘Haiti is really poor’ stories.”

The emails don’t make clear if Haitian misdeeds will be used to determine whether they can remain in the United States.

Kelly has until May 23 — 60 days before the program’s July 22 expiration date to make a decision. AP says that while its unorthodox for criminal histories to be used, it suggests that Kelly is looking at other criteria in his decision on whether to continue to shield the 58,000 Haitians enrolled in the program from deportation.

According to Miami Herald, Haitian immigrant advocates say they can’t believe that Trump administration has launched a “witch hunt” for Haitians with criminal records as it decides whether or not to keep allowing thousands of them to remain in the United States under a special humanitarian program.

“It is disheartening to hear that instead of renewing TPS for theses hardworking families who are at risk of losing their jobs, Secretary Kelly has decided to go on a witch hunt for criminals,” said Marleine Bastien, a leading Haitian advocate and head of the Haitian Women of Miami. “Haitian nationals with criminal records to do not qualify for TPS or benefits.”

Bastien, recalling the olive branch that President Donald Trump extended to the Haitian community during his presidential campaign bid against Hillary Clinton, said “President Trump promised to be Haitians’ best champion. It is time for him to show it.”

Miami Herald Reports, Haiti’s ambassador to the United States, Paul Altidor, has been speaking with Trump administration officials and has requested a meeting with Kelly. He is asking for the benefit to be extended for 18 months. Despite his efforts, however, there has been no public letter from either Haitian President Jovenel Moise or Prime Minister Jack Guy Lafontant on the matter.

Créations Dorées: Handmade in Haiti, Where Passion & Creativity Blend
The Embassy of Haiti in collaboration with Busboys & Poets Launches Haiti Week in DC