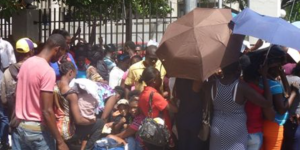 Less than two hours from the Dominican Republic deadline, Dominican Today have reported that there is still some hope for the Haitians still in line.

Earlier today, The Dominican Republic gave  people a few more hours to apply for legal residency as a Wednesday deadline caused long lines to form at offices handling the paperwork.

Hundreds of people, mostly low-wage workers from neighbouring Haiti, waited in line all night to submit residency applications under a registration initiative that began last June. The Interior Ministry announced Wednesday it will accept the applications until midnight, extending the initial deadline by five hours.

The Dominican Republic has said migrants who can prove they entered the country before October 2011 can qualify for legal residency. Otherwise they could face deportation.

Officials say only about 10,000 of the estimated 500,000 people who fall into this category have been able to provide sufficient documentation to qualify. – Dominican Today

According to Dominican Today,

He said government agencies will work to register all the foreigners still on lines. He said all foreigners who registered at the offices will be required to return with those documents in the next 45 days, when they’ll then be sent to Immigration.

Fadul said the more than 200,000 foreigners who registered for legalization can walk the streets with their documents. Paulino said all Interior and Police data will go into a database for the computers used by patrols in the streets to identify the registered foreigners.

Fadul added that Haitian officials will meet with Foreign minister Andrés Navarro Wednesday afternoon to discuss the alleged boycott against the legalization program.