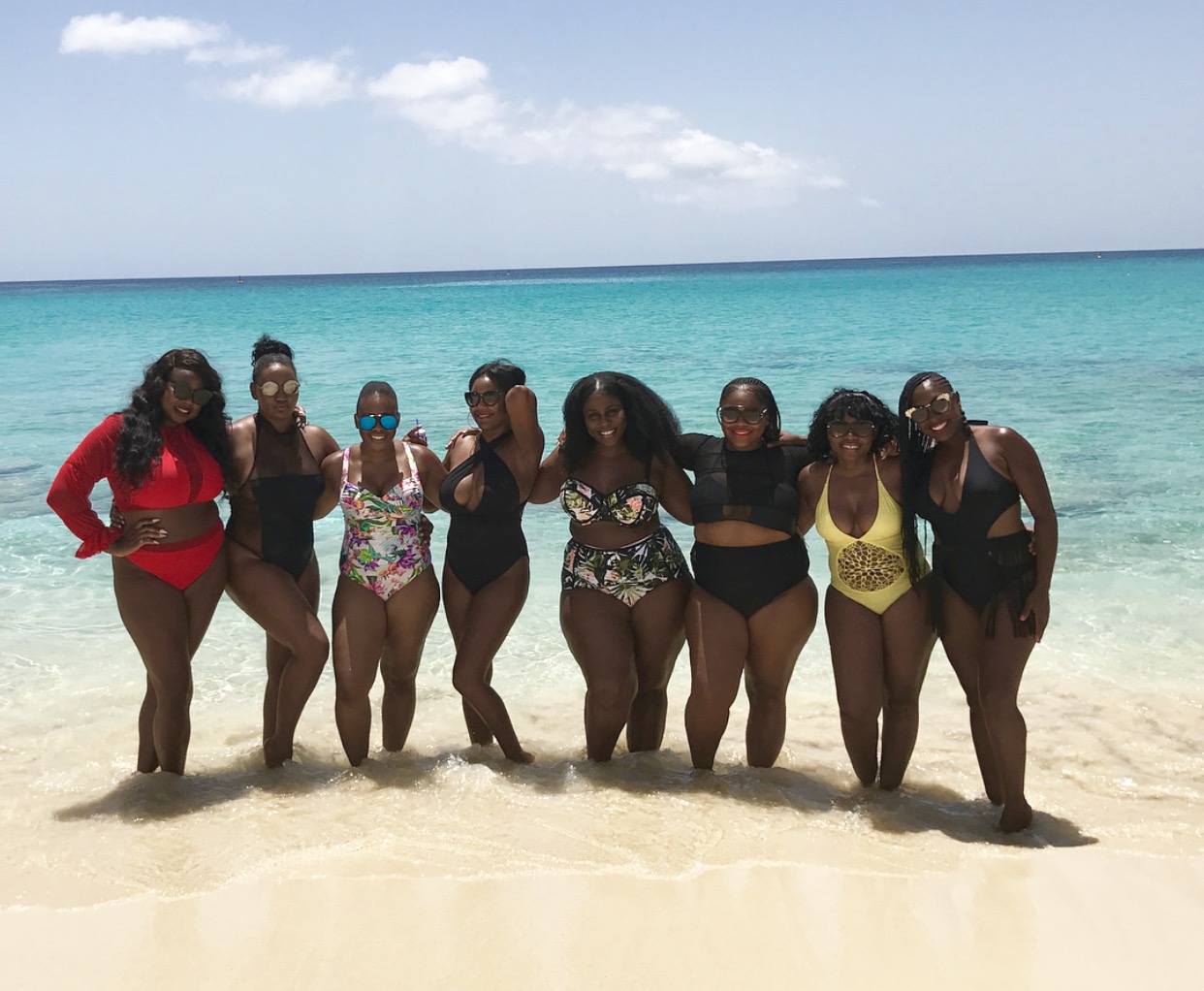 The last week, Hurricane Irma, one of the strongest Atlantic storms ever recorded beard down on the Caribbean leaving nothing but destruction in her path. Irma first passed over Barbuda, an island of 1600 residents, with gusts of at least 155 mph overnight into Wednesday morning. Early Wednesday morning, the eye of Irma then moved over St. Maarten and Anguilla, where sustained winds of 117 mph leaving the island unreachable.

While we wait for the outcome of Irma in South Florida tonight, we received emails from one of our readers along with her friends and family requesting our assistance in spreading the word about their sisters being stranded in St. Maarten.

Hello L’union Suite team,  My sister in Christ, Herlynne Pierre along with 4 of her friends are stranded in the lobby of Simpson Bay Hotel in St. Maarten. They are there after being rescued from their hotel bathroom. There is very little food, no water, and no medical aid along with a reported 300 additional Americans stranded in that lobby with them.  We have reached out to the US Embassy of Curaçao regarding our girls and filled out proper documentation so they remain accountable. If there is any way the L’union Suite team can help us we would be eternally grateful.  Thank you very much in advance. I have CC’d Jessica Pierre, Herlynne’s sister for your reference should you need further information. Please help us bring our girls home.  Blessings, – Evelyn

The group of 8 young women traveled to St. Maarten last Friday on a girls trip to celebrate their friend Drea 33rd birthday. The ladies were sharing pictures and videos celebrating, but then Irma approached. With news of Irma headed directly at them, 2 of the 8 young women immediately changed their flights and traveled back to the states.

There were no additional flights out, so the remaining 6 women were barricaded in the small bathroom space of their 5th-floor villa for 19 hours waiting for help.  They were rescued from the bathroom by fire fighters who couldn’t believe they were alive.

According to online news reports, the island was directly in the storm’s path, and the half-French, half-Dutch island suffered horrendously as a result.  At least four bodies have been recovered on St. Martin, according to French Prime Minister Edouard Philippe, who quoted one local official as saying that 95 percent of the island’s houses had been damaged and 60 percent were uninhabitable.  The airport was destroyed and at times only cleared for military efforts.

We spoke to Kim Hinkson, one of the two travelers who made it off the island and she describes leaving her friends behind as one of the most difficult and gut wrenching experiences ever. As soon as she made it home, Kim along with family members and friends of the remaining 6 women took to social media to ask for help as they collectively work to save their sisters. 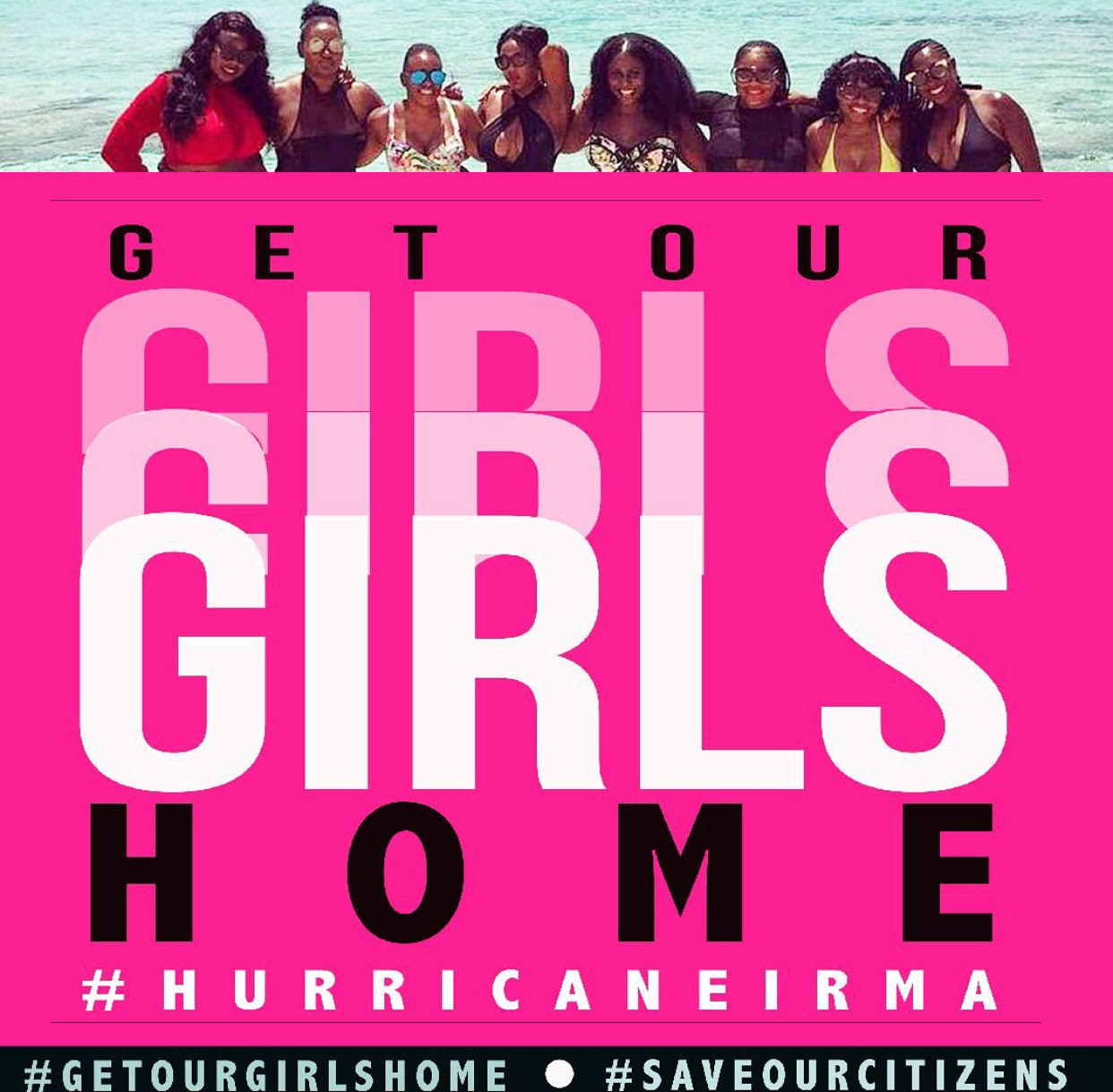 Kim shared this message along with images of Irma aftermath on her Instagram page:

On Tuesday, September 5th, my best friend and I had to do one of the hardest things we’ve done in our life, leaving 6 of our closest friends behind on the island of St. Maarten, as we boarded the last plane out of the country prior to Hurricane Irma’s arrival. Seeking refuge in a tiny half bathroom, rivaling the size of a linen closet for 19hrs, sometimes using all their body weight to keep the door from blowing in, my friends prayed until their voices gave up. After being pinned inside – blocked by debris and furniture with minimal air flow, they pleaded to us for help as soon as service was restored.

Rescued by the fire department after many calls from our friends and family in the U.S, the girls were relocated to a hotel lobby where they are currently seeking shelter. Minimal access to food, no comfortable place to sleep, no access to showers, feces filled restrooms, full body hive breakouts with no access to medicine, our girls are suffering and have received no word of incoming aid.

There are over 300 United States Citizens at this one hotel who need to get home. Another storm, Jose, may be heading in their direction and we need them OUT before that happens.

Kim’s photos and videos arriving at their villa in St.Martin (click arrow to see villa)

Images of damage caused to their villa following Irma as the ladies sat in the bathroom.

In the process of gathering information to share their story, we received word an hour ago that as of 6 am Saturday a military bus picked up the women from the hotel which was sheltering the girls in their lobby. The ladies are currently in San Juan, Puerto Rico hoping to fly back to New York Sunday afternoo.

Thank you to EVERYONE for your prayers, thoughts, kind words, ideas, suggestions, help. This would not be possible without the tears and cries out to our father for safety and coverage. This would not have been possible without the calls to every Embassy, Consulate, Military, Officials, and creating a manifest with names and locations of our girls and countless other citizens. Thank you to the U.S Air Force for getting our girls safely to San Juan. From the bottom of my heart, I THANK YOU!!!!!!