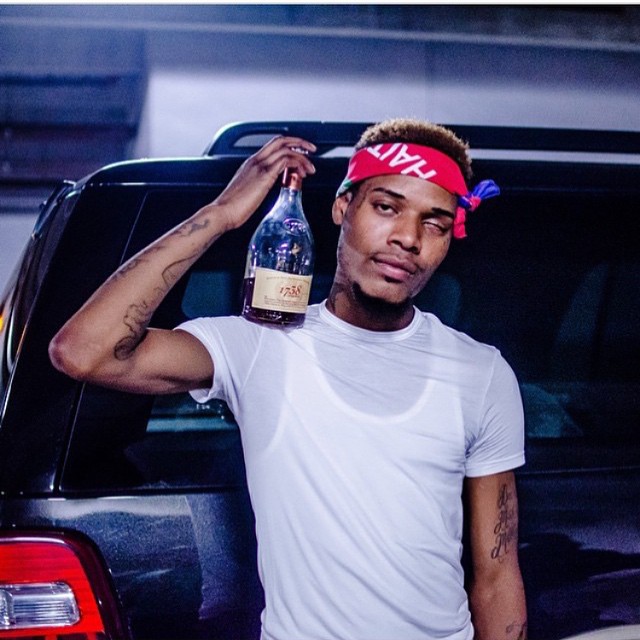 The last three months, if you turned on your radio to any R&B or Hip Hop station, you may have heard 24-year-old rapper Fetty Wap’s hit single “Trap Queen”.

The New Jersey born artist who was brought on stage by Kanye West at the Roc City Classic show in New York and had Jay Z and Beyonce dancing along in the audience  is definitely one of the new artist to watch.

Fetty Wap whose real name is Wille Maxwell  was raised in a housing project of Paterson, New Jersey. He began taking interest in music in 2013. His brother and mother both have a history of singing. In his neighborhood growing up he was nicknamed “Fetty” because he was always known for getting money. “Wap” was added to the end of the name to perform under in tribute to his favorite rapper Gucci Mane. Wap’s Trap Queen single was released in early 2014 titled “Trap Queen“. He made the song in February 2014, but it did not start to get recognition until mid-November 2014, and since it has become a gold record and has over 10 million plays on soundcloud.

While many people have declared “Trap Queen” to be one of the winter’s favorite rap anthem, for those who are unfamiliar with the oeuvre of Fetty Wap, check out six things you should know about the rap superstar and his breakout hit.

1. He’s from Paterson, New Jersey. Like Redman and Queen Latifah before him, Fetty Wap hails from the Garden State, calling home a city that’s about a 40-minute train ride away from Manhattan. Wap is one of the members of Remy Boyz 1738, a rap troupe that also features P-Dice and Montana “Monty” Buckz. The three MCs are constantly collaborating — Monty recently released a single titled “OverNight” with Wap, while P-Dice and Monty teamed up last month on the track “Jalapeño.” 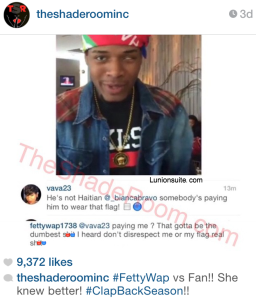 2. He loves the  Haitian flag.  While many people have doubted and said he’s not really Haitian. Fetty wears a Haitian flag tied around his head on and off the stage. In a recent post on The Shade Room’s Instagram page, a fan questioned his nationality saying he was being paid to wear the Haitian flag and he angrily responded to her comment saying “paying me? That gotta be the dumbest sh** I heard, don’t disrespect me or my flag real sh**.

3. He lost the use of his left eye as a child. After dodging questions about his left eye for months, Wap finally explained what caused the physical situation earlier this month in an interview with Shade 45. “When I was little, I got into a little accident, and it gave me congenital glaucoma in both of my eyes,” Wap explained. “The doctors saved one, so I was blessed to [still] have my vision.”

4. “Trap Queen” is speeding up the Billboard charts. In its fourth week on the Hot R&B/Hip-Hop Songs chart, Fetty Wap’s debut single has already crept into the Top 20, moving up two spots to No. 20 on this week’s tally. Perhaps more impressive, however, is its performance on the Hot 100 chart: two weeks after quietly debuting at No. 86, “Trap Queen” is up to No. 60 in its  third week. If that trajectory continues, the single could be a Top 40 hit within a month’s time. 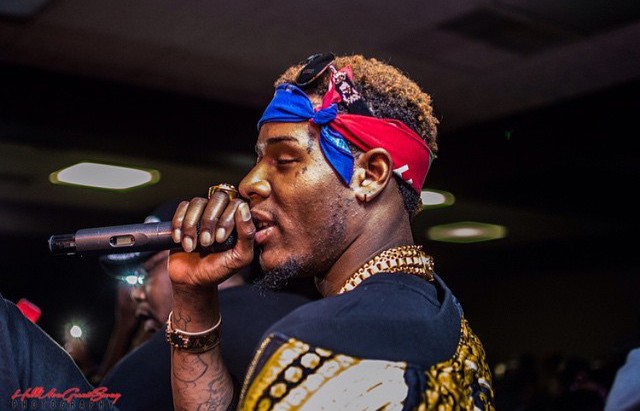 5. A self-titled mixtape is coming. Last November, Wap signed a record deal with 300 Entertainment, the new imprint co-founded by Lyor Cohen, Kevin Liles, Roger Gold and Todd Moscowitz, which he told The Boombox was “the best decision I ever made.” The success of “Trap Queen,” which was featured on last year’s mixtape Up Next, precedes a self-titled mixtape that will feature appearances by fellow Remy Boyz members Montana Buckz and P-Dice, as well as production from Yung Lan and K. Frenzy. “Nobody else’s mixtape is going to be better than mine in 2015,” Fetty continued. “You have my word.” —- Fact 1,3,4,5,6 posted from Billboard.com

6. He Started Making Music 2 Years Ago:  Fetty started doing music only two years ago. “I’m not really into the whole lyrics thing, I just like to make music that people like to listen to. I don’t concept all of my music on one thing. It takes a lot of people hours to make music because they focus so much on one thing. I just do it and I make something you can just vibe to. I feel like when it’s time for me to make, like, better lyrics and give people stories or whatever, I’ll know when it’s time for that. But right now what I’m doing is working for me.”

Update May 4th: After posting this story earlier today. Many fans directed me to this video interview below and these screen shots on instagram of Fetty Wap saying he is not Haitian.

Although I have an inside source that confirm he is, these comments are a bit confusing. Theres an interview being taped with him in the upcoming weeks and I’ve confirm with the host of the interview that the question of whether or not he’s Haitian will be raised.

Update May 8th: I received 100% confirmation from my inside source  that Fetty Wap is not Haitian and apparently just really love the culture.

If you fast forward to about 1:30 of this clip he tells, DJ Whoo Kid he is not Haitian.

In this Civil TV interview, Fetty goes into more details about his culture and explain why he wears the Haitian flag.