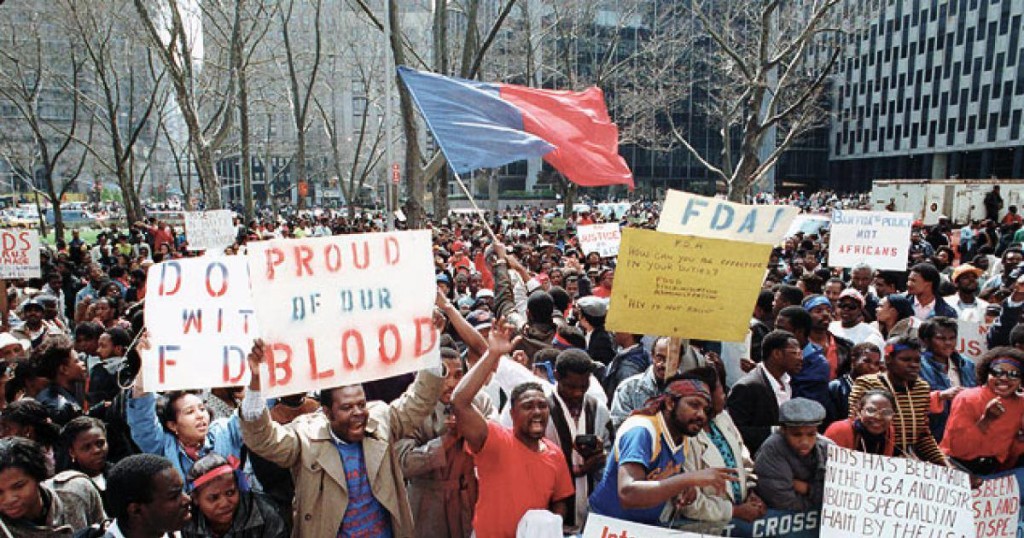 A couple of week ago, I sat on a panel at the University of Miami and as we discuss the past and present of Haitians, and Haitian-Americans one of the panelist started describing what it was  like living in New York in the 80s and 90s and the horrible treatments Haitian and Haitian children had to endured due to the fact that people really believed Haitians were bringing Aids into the country.

In 1990, the FDA recommended a policy of banning blood donations from people of Haitian and sub-Saharan African origin, it proclaimed that all Haitians had bad blood. The majority of U.S. cases in certain poor, urban areas were heterosexual, the agency’s reasoning went, and a population so large was impossible to screen. So Haitians—a “risk group”—need not apply. On April 20, 1990 over 100,000 Haitians poured across the Brooklyn Bridge and flooded downtown Manhattan to protest the recommendation by the FDA to exclude all people from Haiti from donating blood.

Thank you to Carel Pedre of Chokorella for the reminder about what a historical and proud anniversary today is for Haitian Disopora.

Most immigrant communities, preoccupied with making a living, fitting in and solving their daily problems, do not organize themselves as a community to take on big political issues. The Haitian community in the ’70s and ’80s fit this model. They were quiet, hardworking and isolated from the wider communities by their language and traditions; their political focus was Haiti. But beginning in 1990, the Haitian community in New York started to make a major impact on the political scene in New York.

Many demonstrations have been called historic. Some have stood the time test, others have faded. The April 20, 1990, march from Grand Army Plaza in Brooklyn, across the Brooklyn Bridge to Wall Street still resonates.

April 20, 1990, was a Friday, a work day, but still 100,000 or so Haitians assembled and marched, to the surprise and consternation of the cops and to the shock of the financiers on Wall Street. This was nearly one-third of all the Haitians living in the New York Metropolitan area. The financial moguls had their neighborhood clogged with tens of thousands of orderly but insistent Black people who were protesting a decision by the Centers for Disease Control that Haitians (and West Africans) carried AIDS. That’s why the CDC had issued a ruling forbidding Haitians to donate their blood to blood banks.

Haitian children in U.S. schools were subjected to unmerciful teasing about being “dangerous and infected”; Haitian doctors, nurses and medical workers were afraid for their jobs. But most importantly, the national pride of Haitians was deeply impugned — their blood, their life essence, was so unclean, according to the CDC, that they had to be officially shunned. They were the fourth “H” after homosexuals, hemophiliacs and hypodermic drug users. And they were the only nationality singled out by the CDC.

Even after this massive march in the streets, it still took a month or so of dawdling, advisory committee meetings, reports, studies and whatnots before the government felt that enough time had passed that it wouldn’t appear to be bowing to pressure from the community. It did finally revise the ban. – Read More here