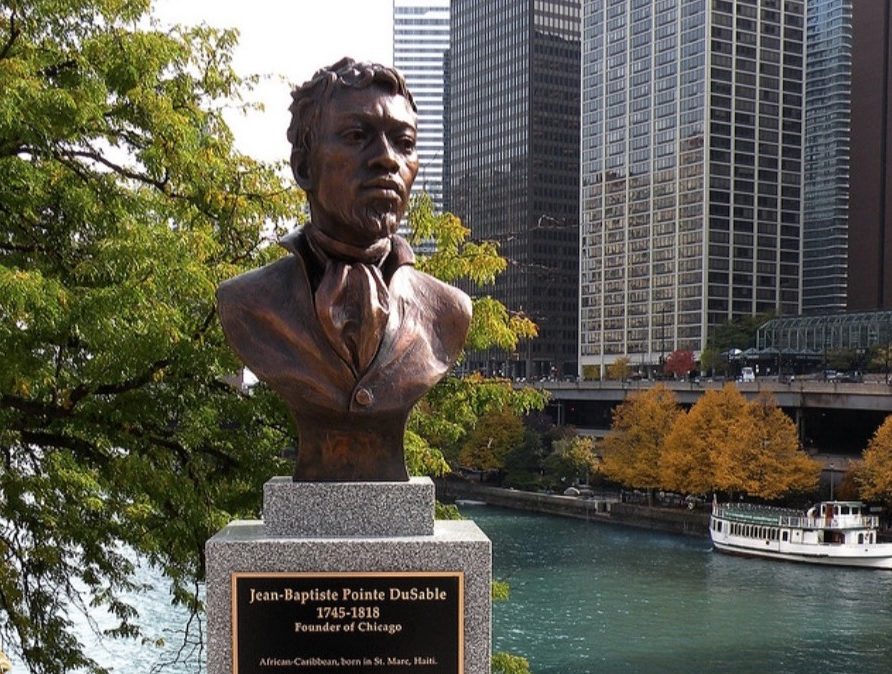 Chicago, Illinois is the third-largest city in the United States. But few people know it was founded by a black man named Jean Baptiste Point DuSable. DuSable was born in Haïti, the world’s oldest black republic, he moved to St Louis when he became a fur trader. When the British took over St Louis, Jean moved to Peoria, Illinois where Native Americans helped him establish a successful trading business.

DuSable made many trips to Canada to bring back furs. He always passed a place called Eschikagov that he used as a lookout point. In 1774, he built a cabin there for his family. Other pioneers built stores and homes near this post. The settlement grew into a city that became Chicago.

Many years passed before DuSable was credited with the founding of Chicago. In 1968, he was finally recognized as the man who founded one of the great cities of the world.

DuSable was born in St.Marc, St. Domingue (present-day Haiti) around 1745. Not very much is known about DuSable’s early life. It is known, however, that DuSable’s mother was probably killed by the Spanish when he was ten. In 1764 DuSable and his friend Jacques Clemorgan moved from Haiti to New Orleans. DuSable was eventually thankful for moving to New Orleans because it was here that he and his friend Clemorgan met their future partner of a trading post in New Orleans, and later in what would become Peoria, Illinois. The young man DuSable and Clemorgan met was Choctaw, a Native American from the Great Lakes. At the time, Choctaw was working at a Catholic mission. DuSable, Clemorgan, and Choctaw later moved to Illinois. It was here that DuSable and Clemorgan learned the skills they would use later at their trading post. Choctaw taught them things of value for their entire life. They learned how to set traps and where to find martens, small animals trapped for their fur. The three men started a trading post. DuSable and Choctaw spent their time trapping in the woods, while Clemorgan devoted his time to hauling pelts downstream to New Orleans.

While trapping one spring day with Choctaw, DuSable met Chief Pontiac, an important Native American leader. Little did they know that they would gain the respect of all the Indians of the Midwest in the weeks to come. Pontiac asked DuSable and Clemorgan to arrange a peace treaty between the Ottawa, Miami, and Illinois tribes. DuSable eagerly arranged the meeting in order to restore peace between the tribes.

DuSable and Choctaw stayed a little longer than expected, but DuSable was thankful, for it was during the stay that he met Catherine, a Potawatomi. DuSable and Catherine were later married. They had two children and lived in a cabin built by DuSable and Choctaw. This cabin was built on a waterway that is now called the Chicago River. But DuSable called it Checagou, the name given it by the Indians.

DuSable became well-known for trading goods throughout the Midwest. He expanded his cabin to a trading post, which later became a small community with a church, school, and store. By 1776 DuSable had commercial buildings, docks, a mansion-house with fruit orchards, and livestock. Pleased with his partner’s accomplishments, Clemorgan went to St. Louis, Missouri, to close his own trading post for fear of damage during the war between Spain and Britain.

DuSable’s trading post was very prosperous. Settlers came to DuSable’s post from Quebec because of difficulties with the English who enforced strict rules regarding travel and free trade and heavily taxed them. Many wanted to buy land from DuSable, but he refused to sell the land. Instead, he gave them some land. Conditions, however, deteriorated in DuSable’s remote outpost. In 1778 British soldiers began to build a fort on DuSable’s land. They arrested DuSable and about a week afterward the Indians ambushed more than half the troops at the fort and wounded many others. Thus, Indians became a colonial ally in the American Revolution.

In the 1779 war was declared on the British because they would not give up the fort, nor would they leave the Great Lakes. It was then that DuSable understood that he and his friends could not keep the red coats away from the Great Lakes and that they would be there for years to come.

In 1800 after DuSable’s son and wife died, DuSable sold his land to Jean Le Lime, an employee of his: Le Lime later sold the land to John Kinzie. Meanwhile, DuSable moved with his daughter, Suzanne, to St. Louis. Later, Suzanne and her husband moved to Canada and DuSable lived with his granddaughter. DuSable bought a house on a farm that he deeded to his grandchildren, Eulalie and Michael. This was on condition that Eulalie cares for him and promise to bury him with Catholic rites in a Catholic cemetery. For the next few years, DuSable lived quietly on his St. Charles farm in Missouri. On August 29, 1818, Jean Baptiste Point DuSable at age seventy-three died quietly in his sleep. True to her word, Eulalie had a funeral mass held for her grandfather and buried him at the Catholic cemetery in St. Charles, Missouri.

Although Chicago was not chartered as a city until 1837, its founding took place many years before when DuSable opened his trading post beside the Chicago River. From this humble start came an important city, and DuSable’s life there in its early days is an important part of that heritage.