I have to see this film!!

It’s seldom we get to see authentic, complex and tactful character representations from the West Indies on the screen, especially in cinema. In her compelling and heartfelt feature film debut, Haitian filmmaker Patricia Benoit follows three Haitian immigrant families seeking refuge in Brooklyn NY from the sociopolitical upheaval surrounding them in their native country during the 1980’s.

Benoit – who also wrote the screenplay – has crafted a movingly poignant and observant film.  Stones in the Sun, which premiered at the Tribeca Film Festival in April earlier this year, just screened as part of the 3rd Annual caribBeing event at the TriBeCa theaters this past Saturday. 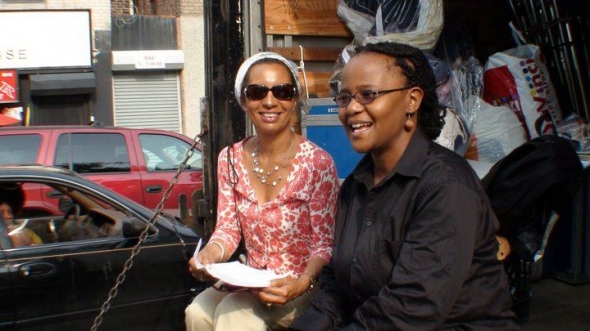 The finely interwoven stories – all three ultimately linked – begin with Gerald (a superb performance by Thierry Saintine), who is also at the center. He is the impassioned host of the anti-Haitian government show “Drums of the people”.  What’s fascinating about his story is that aside from his close involvement in the sociopolitical matters of his native country, he has acclimated himself to a new life in an upscale Brooklyn apartment with his pregnant, Caucasian wife. Yet, his heart and soul remains with Haiti and its people.  Their story – much like the other two – is paced just right, evoking a sense of intrigue and unpredictability. His wife listens to him daily “just to hear his voice”, since doesn’t understand/speak Creole. Their story begins to unravel when his wife welcomes Gerald’s father – to his son’s chagrin – who has unexpectedly showed up from Haiti at their doorstep.

What’s also fantastic about watching this film is how penetrable it becomes; you get the feeling that you are taking this journey alongside these characters.  Riva, played by newcomer Patricia Rhinvil in gripping film acting debut, travels to Brooklyn to join her husband, a cab driver. The story of this genuinely loving couple is endearing to watch.  In one tender scene, Riva is bathing her husband in the tub, yet she is confronted with her own psychological devastation caused by atrocities in her homeland.   One of the elements that I appreciated the most was her husband’s patience. It’s unfortunate that many of us are almost programmed to “assume” (you know the saying) how a husband would react in certain situations. A lesson of love is learned in this case. As Riva also struggles to adjust to living in the city, when we later find out the reasons behind her inner turmoil, the results are heartrending, yet inspiring.

Edwidge Danticat delivers another fine performance as Yannick, a teacher who is caught in her students’ political movement. She flees the chaos to move in with her sister in the suburbs. Micheline (a superb Michele Marceline) lives in a wealthy neighborhood with her overprotected daughter. The sisters were witnesses to tragedy and struggles growing up in their native country and Micheline, a realtor, has embraced a pretentious lifestyle of a “high class” American. Unlike Micheline, Yannick is unwilling to put her past behind and she is fervent on bringing justice to her students back at home. And, no matter how “different” these sisters’ paths in life may seem, the very convincing acting between the two actresses pave the way to some riveting and touching scenes. The tensions in their rivalry are clearly palpable, and the complexities of their differences become well understood.

Raw and understated, Stones in the Sun is handled with sensitivity in regards to its subjects. The well-developed drama has plenty of powerful performances and climactic scenes to keep you on the edge of your seat. But aside from this, hopefully you will come out of this experience with a new appreciation and respect for Haiti, its culture and the many realities its immigrants have undergone.

“Stones in the river cannot know the problem of stones in the sun”. – Story Source  –     Movie Facebook Page

I don’t think the film is available to the public as of yet. There was a screening of the film on 12/1 at the Flatbush Film Festival this past Saturday at Tribeca Cinemas in New York.

Visit their Facebook   for updates and future screenings of the film.