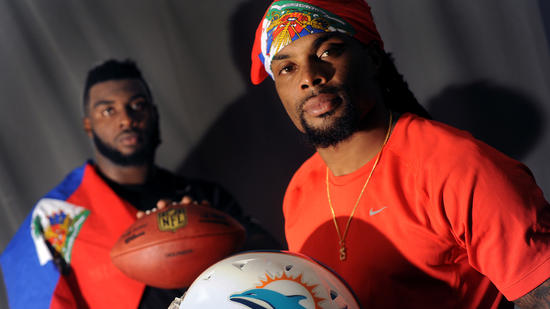 It’s always very refreshing to hear about Haitian-Americans making an impact and being recognized for their accomplishments in their respective fields. Dolphins players Louis Delmas and Terrence Fede are not just great athletes but role models for other young Haitian boys around the country and particularly in a large Haitian community like that of the Miami area.

Fede grew up in the tiny town of Nyak, NY (population 7,000). His mother moved to the United States as a child; his father moved here in his 20s. “My whole family is Haitian,” Fede said. “It’s what I’ve grown up around. It’s what I am. I’m not that good at speaking Creole, but I understand it more than I can speak it.”

“When I got down here, I realized the Haitian community down here is very big,” said Fede, who arrived here in May, soon after being drafted by the Dolphins. “Coming from New York, we have a lot of Haitian people, but it’s not as big as down here.

“Me and Louis see ourselves as role models down here. Whatever we do on the field and off the field, little Haitian kids are looking at us and maybe dreaming of becoming NFL players.” – Read full article here

All pictures courtesy of  Sunsentinel