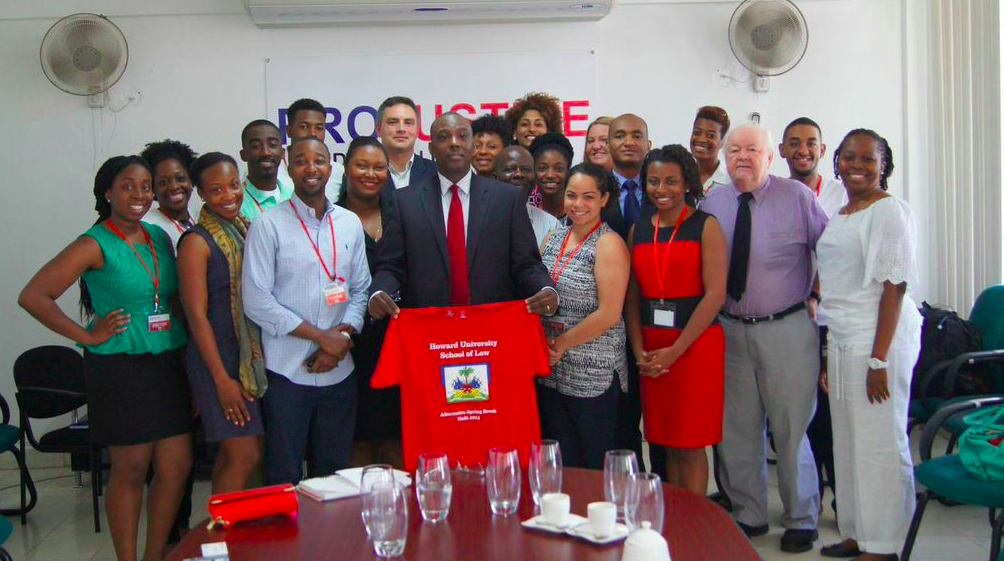 One of the many things I hear from my readers is the need to encourage more young Haitian-Americans to get involve by traveling back to Haiti to give back to the communities. When I heard about the group of Howard University students who skipped the beaches and parties during their spring break and traveled to Haiti to volunteer their time, I had to reach out to Haitian-American student Charles Pierre to talk to him his experience there.

I organized a group of Howard University School of Law to visit Haiti. While on the island we visited the Université de Quisqueya and coached them on how to obtain LLM degrees. We met with government officials to discuss Haitian law and how American lawyers can aid in their efforts to bring down corruption. We also met and worked with USAID’s main legal effort, ProJustice. While with USAID lawyers we visited a youth detention center and helped at a tribunal in Cité Soleil. We also had the great opportunity to play with kids at an establishment that helps poor children become self sufficient. This was an amazing trip. – Charles Pierre

Charles, tell us a little bit about yourself and the organization?

My name is Charles Pierre, I am a Haitian-American second year law student at the Howard University School of Law in Washington, D.C. Howard University encourages its students to participate in Alternative Spring Break each year. ASB is an organization that funds students’ trips to various sites, including Haiti this year. I am originally from Mississippi, but moved to Haiti at 10 years old. It was when I moved to Haiti that I realized that the country was beautiful, interesting and would capture the imagination of the world, if they saw it. Since moving back to the United States, showing the “real Haiti” has been my mission and passion. I won’t stop until people know how valuable a country it is and how valuable our people are.

What motivated you to organize this trip?

On a personal level I was motivated to organize this trip because of people’s misconception about Haiti. When I lived in Indiana for college, I told someone I was Haitian. I remember this young man’s face expression. It was as if he was saying, “I’m sorry to hear that.” From that moment on I was motivated to deconstruct negative stereotypes of Haiti and to provide a real portrait of the island. When Howard University’s ASB provided me with this opportunity, I was thrilled. I wanted to show American students how beautiful the country is and how we can help the Haitian people without taking jobs away from locals. As Americans, we believe that if we send shirts, or clothing that we have really helped the people long term. This isn’t the case. Though very kind, those acts merely put band-aids on the wounds. We need to help people in other ways. We need to work with them to become self sufficient. We need to open our ears and listen to these people, too. So what motivated me was the misconception that Haiti is a wasteland. And what motivated the legal aspect of the trip was the notion that we had an opportunity to help in a real way that would not take opportunities away from the Haitian people.

How many students were Haitian?

No. I was the only Haitian student out of the 13 students.

What was everyone’s reaction upon arriving to Haiti?

Upon arriving to Haiti people were a bit uncomfortable. The language was foreign to them. It was hot once we left the airport. The driving was not what people were used to. However, it was only a matter of hours before Haitian hospitality took over and made people feel comfortable. 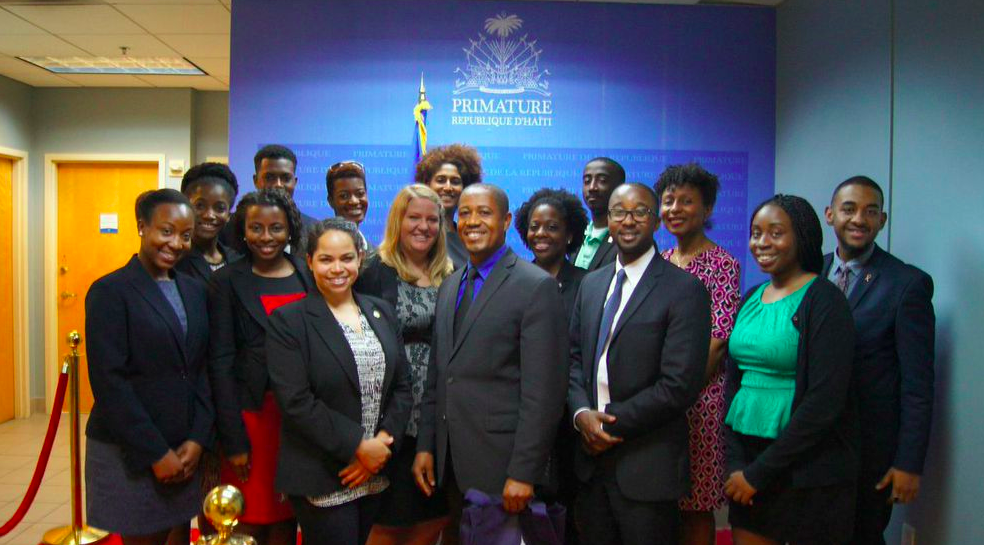 Where did you visit and what was the purpose and goal of each location?

We went to Wahoo Bay Beach Resort on our second day. I wanted to show them one of Haiti’s beaches that catered to a young audience. Dwayne Wade, Gabrielle Union and Chris Bosh were recently at Wahoo Bay so I knew it would be an added bonus to visit where stars recently were. On Monday we visited the Université de Quisqueya where we presented, to law students, our LLM program. We detailed the benefits to receiving an LLM and the application process. More than 30 students showed up and it was a great success. We also got a chance to sit in on a class held by former Presidential candidate, Professor Manigat. On Tuesday we had meetings with lawyers from USAID, IFES and Digicel. We wanted to get a sense of what sort of work they did on the ground and how the law was implicated. They were gracious with their time and answered all of our questions. On Wednesday we met with ProJustice, a USAID funded program that seeks to assist the government in the electoral process. ProJustice is led by a Haitian. This was great to see because many organizations are led by foreigners, not the people whom they are trying to help. We also met with a member of the Haitian Government who discussed how laws were passed, the different branches of government and the role he plays as Deputy Secretary in the Judiciary.

What is LLM degrees?

LLM (Master of Laws) is an internationally recognized postgraduate law degree. It is usually obtained by completing a one-year full-time program. Law students and professionals frequently pursue the LL.M. to gain expertise in a specialized field of law, for example in the area of tax law or international law. With an LLM, international students can sit for the bar exam in any state and practice law there. It affords them the opportunity to be lawyers in Haiti and in the United States. 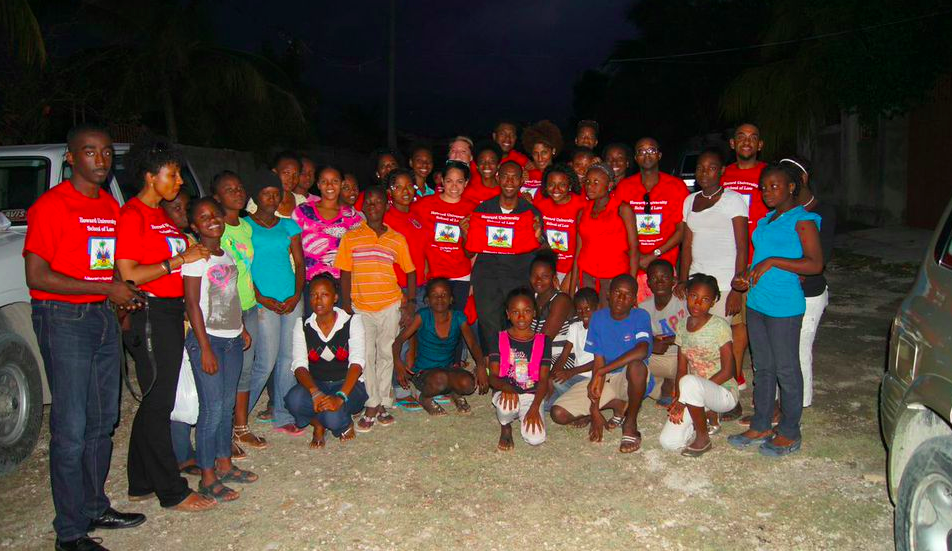 Meeting the children was inspiring. This establishment, run by Father Fredy Elie, houses and teaches students who formerly were homeless. Many of them were negatively affected by the earthquake and all of them had interesting stories. It was a joy to look across the room and see Howard Law students singing for them, playing with them and treating them like the regular kids they are. They like pop music, know all of the words to John Legend’s All of Me, and like to play around. They did not want handouts and they discussed plans of paying for a new building with the proceeds they’d make through the sale of a CD. The CD is entirely produced by them. They play the instruments, sing and I believe they had something to do with the artwork. These kids are rockstars (literally) and truly inspiring.

What do you think is the most important thing you took away from this trip?

On our last night we went around the room and each person shared their take-away’s from the trip. Mine was the restored hope I have in my generation to be more responsible and to challenge what they read or see on TV. Haiti is a beautiful country that has its flaws, like every other country. Yes, there are issues in regards to mishandling of resources. Yes, there are issues in regards to wastefulness in some NGO’s, but the majority – the overwhelming majority – of Haitian people are good and do not want handouts.

What is your advice for other Haitian-Americans who are interested in traveling to Haiti to give back to the country?

I say do it, the time is now! Haiti is waiting for you with open arms, a cool breeze and tons of beautiful smiles.