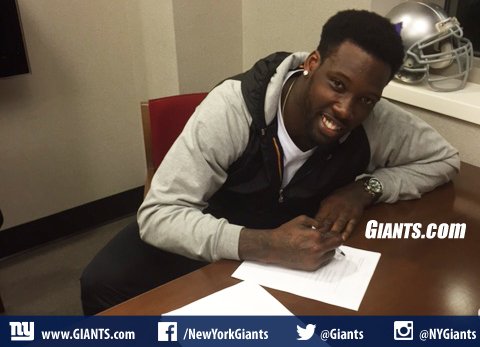 We haven’t seen Haitian-American six-year NFL veteran Jason Pierre-Paul on the field this season  after he suffered serious injuries in a July 4 fireworks accident in Florida. Pierre-Paul’s right index finger was amputated in surgery following the accident. He has been working out and rehabbing in his home state of Florida.

The Giants today announced they have reached a contract agreement with Jason Pierre-Paul that will enable the two-time Pro Bowl defensive end to report to the team and begin working toward a return to the playing field.

Pierre-Paul has signed a one-year, incentive-laden deal with the Giants, the team announced Tuesday. NFL Media Insider Ian Rapoport first broke the news. The Giants are “comfortable” with where Pierre-Paul is physically after examining his hand this week.

The Giants received a two-week roster exemption for him to start practicing. The roster exemption means the team has two weeks to activate Pierre-Paul as he gets back into football shape. Pierre-Paul told the team’s website he feels “younger” after his time away from the game.

“What a humbling experience this has been for me!” Pierre-Paul wrote on Instagram.

Pierre-Paul lost a finger and damaged other parts of his hand in a July 4 fireworks accident, raising doubts about his ability to continue playing football. The team had used its franchise tag on the two-time Pro Bowl pass rusher in March, but Pierre-Paul had not signed his $14.8 million tender before the injury and has not been under contract since the offseason began. He’s expected to sign a prorated deal that will be heavy on incentives.

The Giants have survived JPP’s absence well, going 4-3. But they have virtually no pass rush and they are No. 29 in the NFL in yards allowed on defense. Pierre-Paul is exactly what this defense needs in a critical season for coach Tom Coughlin and general manager Jerry Reese.

After a difficult offseason for both the team and Pierre-Paul, both sides were all smiles Tuesday.